About a week before the release of Wild Hunt, having only worked for Gamepressure for a month, I received a serious task from the then editor-in-chief: to mine through The Witcher 3 in search of proper names to prepare a glossary for the guide and walkthrough. I was delighted, because I'd been waiting for this game for several years, and there I was, playing it a week before global release, with an Excel sheet ready to be filled with celandines, sewant mushrooms, and honeysuckles. For the following several dozen hours, The Witcher 3 turned out to be exactly what I'd hoped for.

Today, the game slowly getting close to a decade old, and two weeks before the launch of the next-gen edition, we had the opportunity to play it for four hours during a special showcase, and while we weren't stunned by the graphics, other things made us extra happy, among them some welcome improvements that the community requested for years, as well as the return of the Polish voice of the Witcher, Jacek Rozenek, for the new quest, which is actually quite a story. Yes, in two weeks I will be playing The Witcher 3 just like it was 2015.

If you follow the latest news about the content of the free next-gen patch for Wild Hunt, you are certainly aware of the most publicized change it will introduce. Consoles get two graphics modes: quality, with ray tracing, running the game @ 30 frames per second, and performance, which allows playing in stable 60 fps. At first glance, the quality mode doesn't change as much to warrant a 50% drop of performance, and the problem is also, and unfortunately, the instability of the promised 30 fps. Playing @60 frames was, for me, much more enjoyable. This doesn't mean, of course, that the game itself doesn't look much better – a large part of the visual overhaul consists in the increased texture resolutions, achieved both by the devs' efforts, and by implementing such mods as The Witcher 3 HD Reworked Project, or HD Monsters Reworked Mod in the patch – on all platforms. On top of that, we have ray tracing, global illumination, ambient occlusion, FSR, and on PC, improved reflections and better shadows. 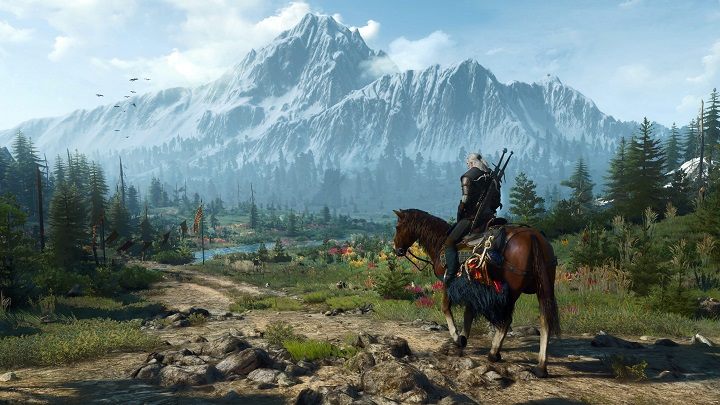 So, just to get it out of the way, here are all the major changes and novelties of the next-gen patch: photo mode, cross-platform saves, support for Dual Sense controllers on PS5 (seem a little badly implemented), world map icon filters, new language versions, as well as a set of add-ons inspired by the Netflix series, including a completely new quest that required the involvement of Geralt's voice actors in all languages. But first things first.

In a conversation with Philipp Weber, Lead Quest Designer, I learned a lot of interesting things about small changes and fixes that the studio has introduced, but which were not initially planned. Let us remind you that the first announcement of the next-gen version comes from September 2020, and this port was supposed to be developed by Saber Interactive. The project, however, was taken from Saber this year, and CD Projekt Red took care of finishing the patch themselves – fortunately, I think, because had this update introduced exclusively graphical improvements, the sense of disappointment could be huge.

At the time of handing over their work, Saber had already gotten knee-deep in the project – ray tracing was implemented, textures were improved, some bugs were mended. However, CDPR realized that, as they had to finish some graphics improvements off personally, they might as well do something more. So, the original plan that assumed only adding a few new blueprints for items inspired by the Netflix show was expanded, and the decision was made to write an entire quest, just to make the acquisition of the new gear consistent with the way other witcher armor set blueprints were obtained in the original.

And here, we'd like to go a little deeper, because there are some interesting stories behind it. The quest comes with new dialogue lines recorded especially for it. This involved a big return among the Polish cast of the game: Jacek Rozenek, voice of Geralt, who suffered a stroke in May 2019, which resulted in his partial paralysis and threatened his entire career. Rozenek's participation was imperative for the studio – had the return of Polish voice of Geralt not been possible, the studio would have prepared a smaller quest, which would not require any spoken dialogs – it was all, or nothing. 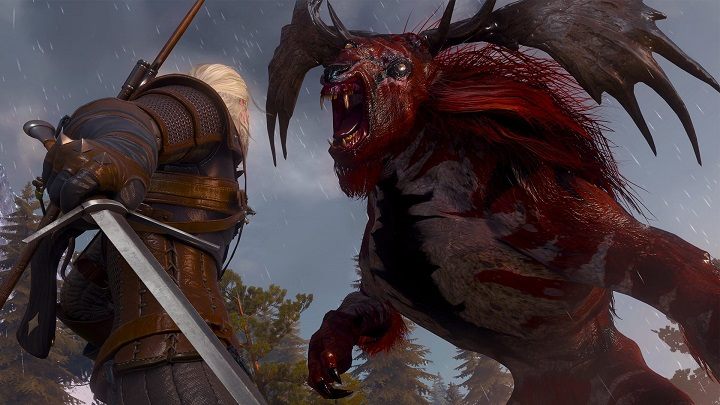 Rozenek was able to do it and agreed to return, so Geralts in all languages will make a come back, and we will get a quest that's quite extensive for a pretext task, apparently with three different endings. You can actually hear the Polish voice actor struggles a little with the aftermath of the stroke, but this just makes the entire affair even more heartwarming.

Oh, by the way, do you remember the Devil's Pit? It's the big mine that originally had a few deserters running around and offered nothing interesting beyond that. Fans dug up the information a long time ago that it was part of a quest line that got removed from the game, but the studio decided to keep the location itself in the game because it was so unique that removing it was… a pity. So, one of the fandom's dreams will come true – the new quest will take place in Devil's Pit.

The interior of the mine was reconstructed for the purpose of this quest, and the intriguing location finally gets the content and detail it deserves. Above the gate closing access to the mine, we see a message written in Glagolitic (a Slavonic writing system) script. And I was probably the only person in the room to look up the translation of that sign into Polish, to find that it says "danger." After completing the quest, closer to the Devil's Pit entrance, there is another inscription, but I'll leave it to you to decipher that one.

Move a bit to the south-west from there, we found the creators listened to the pleas of the community and have introduced a major quality-of-life improvement – the Crow's Perch now has a fast-travel road sign right in front of Barn’s house!!! So far, the developers have explained that placing a marker there was impossible because of the Bloody Baron quest line and a few cutscenes that must take place during it. So, how did the devs solve it?

I remember asking Pawel Sasko, who was the quest designer for the Bloody Baron quest, “what would we even need to do to make that quest work with the fast travel point placed there?” And he said: "Oh, we would have to reimplement that entire quest from scratch." And you know, people like the Bloody Baron quest, so we didn't want to touch it. So, we did it in a very safe way, and because of that, we didn't want to put it in the patch notes as a big new feature. It's more of a hidden thing for people to find and enjoy.

So, the marker isn't available from the very beginning, but once we've taken Filip Stenger's story far enough that the functional marker doesn't break anything quest-wise, it becomes available as fast travel point. The creators even made sure to include a man working on assembling and placing the object during the quest, and when the right moment comes, he simply finishes his work and we’re able to use it.

Additionally, a slew of irritating details that lingered in the game were finally mended. Do you remember the scene where Geralt finally finds Ciri? The girl's dagger that hangs on her belt went haywire for a moment, which definitely spoiled the high emotional charge of the scene. Weber explained that it was caused by a very tricky problem with the physics engine, and the most efficient way to solve it was to simply remove the dagger for that scene. And finally! A few quests that could not be completed due to blockers have also been fixed, and not only for new playthroughs, but also for existing saves. But we haven't had a chance to verify it ourselves. 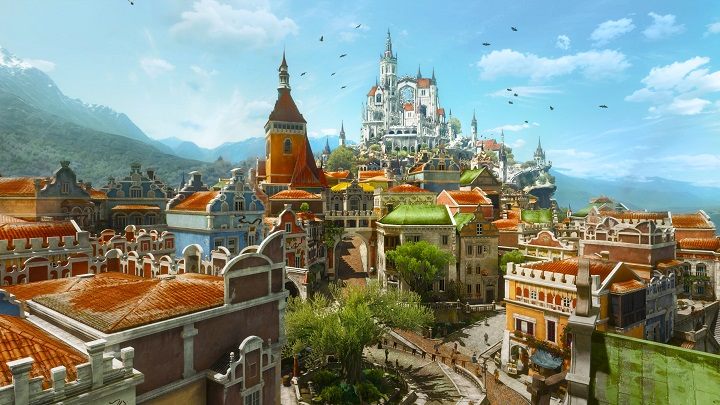 The number of little things that improve the overall experience is indeed huge. The horse, Roach, is one of the elements that weren't rebuilt from scratch, but rather improved. Roach can finally walk backwards, it's possible to make the horse perform a kick attack (assigned to its own button, it was previously automatic and completely random) and we can notice that the mare raises her head higher when she's in the water.

Many of these things were not highlighted during the official stream, and we won't even learn about them from the patch notes. Weber explained it this way:

We don't want to oversell a lot of those fixes. As an example, I think we don’t even have the fixes we did to Roach in the patch notes. We wanted to improve some stuff, but if we said, "Roach is fixed," people would naturally expect groundbreaking things. We really want to be reasonable about it, we want to be honest with the players.

After Cyberpunk, many people accused CD Projekt of overconfidence, even insolence, so it's no wonder that the studio tweaked its information policy this time around. Meanwhile, it is these little things, many of which we had to discover on our own, that seem instrumental to making this patch worthwhile. As someone who played The Witcher 3 over 7 years ago on PC, I honestly didn't see a huge difference between the console version and what I remember from my previous PC runs at high graphics settings. I think that the players who will appreciate the graphical changes the most are those, who played the game on previous-gen consoles, a few years ago. However, these details are delighting, and the decision CDPR made to finish the next-gen update personally, even if it meant delays, was worth the gamble. 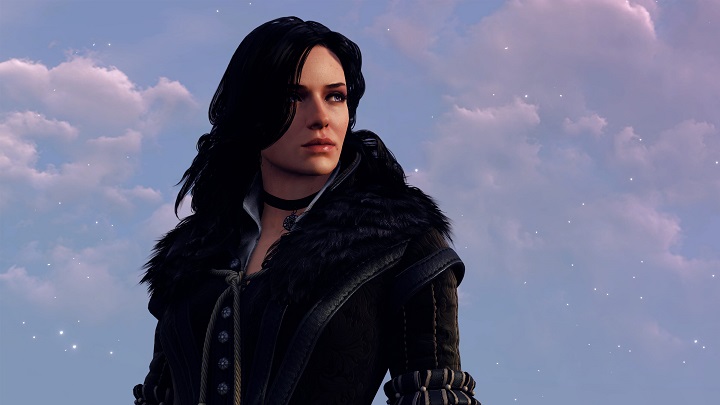 It should be a thrill to get back to the game, even more so because there's bound to by many more interesting details and changes waiting to be discovered in the next-gen patch. Reddit is sure to be brimming with discoveries and new easter eggs in the weeks following the launch.

Regardless of whether you've played the 2015 RPG classic or not, December 14th will be the perfect day to enter the Northern Realms. Besides, the next-gen patch's free, so you're not even risking anything – it's just pure, Witcher goodness waiting for us once again. I, for one, won't think twice.