Who hasn't dreamt of establishing a profitable business or becoming a manager in a successful company? A lot of people probably managed to achieve such a goal. However, while mistakes have their consequences in real life, in the virtual world we can experiment without any limitations. Economic games, popularly known as tycoons, give you the opportunity to test yourself as a business owner, mayor, ancient leader, farmer or even a pirate. It doesn't matter who you really are. And that's why we love this genre so much.

The genre's popularity peaked in the mid-1990s. of the last century until the middle of the first decade of this century. However, it doesn't mean that today the genre is dead and there aren't any gems of this kind on the market. In order to get you acquainted with the genre history or show new productions, we decided to list 30 most important titles - a recent (2022) update added two new titles to the list. Are you ready? Lets do it! 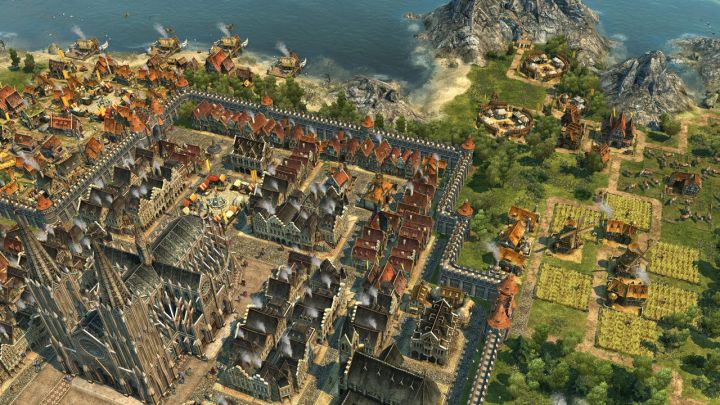 Games from the Anno series have been impressive for many years due to their scale and beautiful graphics.

The first instalment of the popular Anno series was created in 1998 by the Austrian Max Design studio as a response to the competitive and positively acclaimed Settlers series. Same like in its direct rival - Anno 1602 - the developers decided to simplify the military aspects, and placed emphasis on economy and trade (including maritime trade) With time, the series was taken over by German Related Designs, and then (ironically!) the former competitors from Blue Byte Software (developers of The Settlers series). Although the individual installments are set in different historical periods, their gameplay mechanics are similar, and the sum of the numbers in the title always equal 9.

For the purpose of this list, we've chosen Anno 1404, released in 2009, and the first installment of the series that was co-developed by Blue Byte Software. In the game we are taken to the title beginning of the 15th century, and our task is to develop a well-functioning settlement, which in time may transform into a lively metropolis. As the game progresses, we inhabit new islands, fulfill the needs of colonists and the demand for certain goods, as well as conduct diplomatic activities. Maritime trade between the various islands of our empire and simplified combat are also very important features.

Anno 1404 is the penultimate installment of the series that is based on historical realities. The next entries took a sharp turn towards science fiction, ending the historical streak, with further games taking place in 2070 and 2205, respectively. Unexpectedly, the developers returned to a historical setting, releasing Anno 1800. When it comes to 1404, despite the time passed,it still looks very good and can engage the player for long hours. More so that the game (Gold edition with the Venice patch), is still available on all major digital distribution platforms. 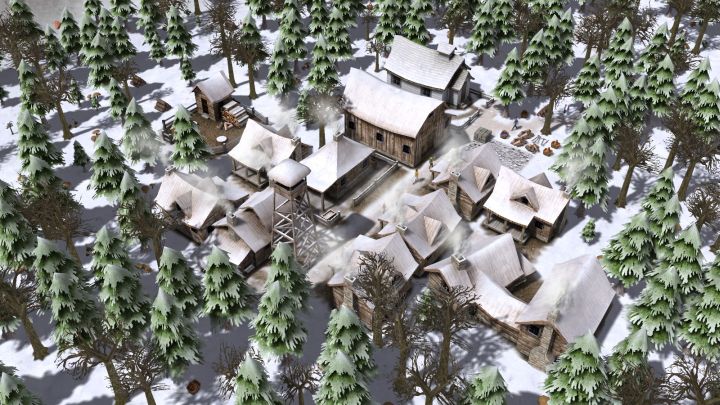 Harsh winter is a real survival camp for our settlers.

BANISHED IN A NUTSHELL

Banished is one of the few fully independent games on our list. This game was developed by Shining Rock Software - a studio with only one game designer. He's a Polish developer called Łukasz Hodorowicz (his brother composed music for the game). The described title is a kind of economic sandbox set in the Middle Ages. Although the game was clearly inspired by the behemoths of the genre (such as The Settlers, or Anno series) a few fresh and original ideas of the creator made the game appeal to a solid player base.

During the game you take command of a small group of people expelled from their hometown. When they find a suitable place to settle, their only possessions are clothes and a few carts with basic raw materials. Your task is to ensure that all units will stay alive and develop a small community over some time.

At first glance, Banished does not differ significantly from most similar economic games in terms of gameplay mechanisms: we construct new buildings and order our subordinates to engage in hunting, gathering, farming or trade. What is important, we won't find typical development trees in the game, and by having the appropriate resources, we can build any structure at any time, which gives the whole game a much more sandbox character.

Also, a strong survival theme has been skillfully implemented to Banished. The main "resource" in the game are settlers, who within the passage of time grow up, procreate offspring and die when they become old. Adequate resource management is therefore essential to meet all their needs, and it may be a real challenge to survive severe winters, devastated crops, plagues, wildfires or droughts. All this means that every bad decision can lead to mass deaths of your people. The increasing level of difficulty and complexity of the game may offend many inexperienced amateurs of tycoons.