I admit, I admit  Crossroads Inn took me completely by surprise. When I heard about an economic game involving running a tavern in a fantasy world, and also being the debut project of a small Polish studio  I almost involuntarily put it in the same category as Two Point Hospital. I expected a simple, pleasant game, in which most of the charm is driven by endless gags and jabs on high-budget RPGs like Skyrim or The Witcher. And then such a surprise  because the work of Kraken Unleashed Games has all the seeming of a complex game that's... entirely serious?

The first thing that came to me after a few minutes with the game  truncated, medieval The Sims blended with extensive elements of economic strategy, with some RPG seasoning. And although I did indulge in this combination with elation, I also realized that, at least due to the first of the three elements, some may look critically at this game. Those allergic to any sort of reference to Maxis' cult-classic series, I can immediately reassure  the commonalities end with building your own inn. The intuitive way of creating entire rooms with a single mouse drag, painting walls, inserting furniture and decorations, immediately reminds you of building your dream home in The Sims. 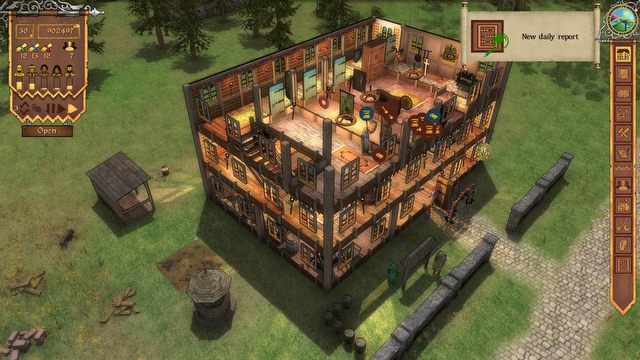 Of course, there are no such elaborate and extravagant elements of house decor, but you also need to take a correction for the realities in which Crossroads Inn takes place. Developers give us a clear goal  create a tavern that will attract as many customers as possible  and give us the tools we need for that. So, you get as much freedom as permited by the realities  pink tiles are a no-go. The inns we design will be maintained in a sufficiently gritty, medieval climate, but within it, the creators will give us a lot of types of furniture, doors, and all sorts of smaller trinkets...

The developers from the Kraken Unleashed Games don't seem to be intimidated by the fact that Crossroads Inn is their debut project, and they've actually been able to draw some big names into their game. Example? Marcin Przybylowicz, the composer of the music for the Witcher 3 and the upcoming Cyberpunk 2077 is responsible for a significant part of the soundtrack.

Lovers of playing virtual architect certainly won't be disappointed, although the limited palette of colors, and the neglegent differences between some items somewhat spoil the overall impression. In this particular case, it probably wouldn't hurt to be a bit more unconventional, and try to lean a bit towards a more fable-like mood  maybe the game wouldn't be so firmly rooted in the realities of the Middle Ages, but it would improve the legibility and overall appeal of the game's visuals. As things stand now, the entire setting of the game can be encapsulated in the word "brownish" and it seems impossible to create two significantly different taverns.

Nevertheless, I became so engrossed during my first approach to designing a tavern that I barely managed to check the rest of the mechanics, which ought not to be ignored, especially by serious journalists. Constructing the inn is but a beginning. Then the economic aspect of the game is the revealed: among other things, we need to invent a menu, plan advertisement and, above all, hire some staff. As it turns out, there's plenty of people willing to work in gastronomy in the fantastic world of Delcrys, which is good, because there's plenty of work to do: someone has to cook, clean, wait tables, pour drinks, and sometimes politely show the more adventurous customers to the exit. The point is that each of the potential employees has their own peculiar traits and quirks, and the situation may force us, for example, to hire someone who will regularly steal beer from barrels. 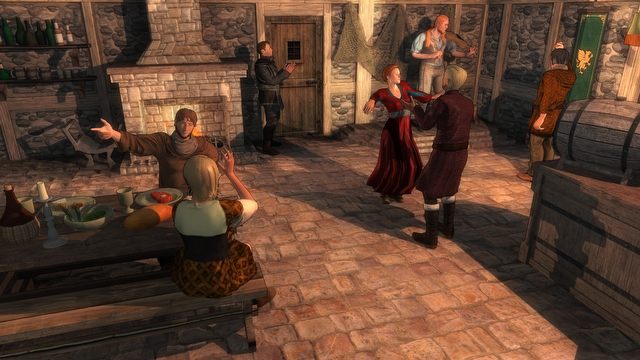 It will also be our job to figure out what inn's menu is. Is the offer focused on quality meals and beds for tired travellers? Or perhaps a regular and disreputable joint, where morning coffee is by default served with booze sounds more up your alley? Depending on these decisions, a different lot of customers from different social stratas will be interested in the establishment. So, if we decided to sell the cheapest beer, we won't make a penny on aristocrats, but if we serve only lark's tongues in aspic, ordinary townspeople are unlikely to pay a visit, too. Therefore, we must immediately consider what customers we care about the most and properly plan the rooms, the decor, and the menu. 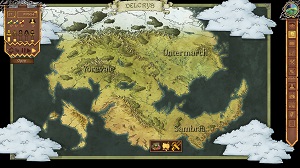 For gamers who, apart from casual fun, would also like a more story-oriented module, the developers have prepared a story campaign. The core of the gameplay remains unchanged  we design, develop, and popularize our tavern  but the ultimate target is much more ambitious. Following the death of a noble ruler, chaos prevails in our kingdom  who will sit on the throne is to be decided by an election. Such matters should not seem to concern the owner of a regular tavern at crossroads, but it quickly turns out that through growing popularity and influence in various spheres, the innkeeper has a pretty strong levrage on the fate of the country. The campaign is supposedly extensive  the developers have already announced twelve possible endings, RPG-style character development should incourage repeated playthroughs.

I've only spent half an hour with Crossroads Inn, and I realize I haven't discovered a fraction of what the creators are brewing for us. And honestly, I'm very excited about that. Although the color palette may seem a bit disagreeable, ostensibly making the game a bit too serious, the production ultimately manages to show its true face of a pleasant and complex economical strategy, with elements of RPG and simulator. Maybe the game won't make untold millions of dollars, but the devs can manage to deliver on all of their promises, then Crossroads Inn will definitely find many players.

The expenses of the trip to gamescom were covered by Gamepressure.

According to our users, Crossroads Inn for PC was a disappointment - the expectations before the release were higher than the current average user score. Our reviewer rated the game 6.5/10, you can read full review here: Crossroads Inn Review  in Desperate Need of Gordon Ramsey