After months of delays, I think humanity is finally on course to its destination. Of course, it's not about actual humanity and some lofty existential decisions, but about the game Humankind. The release date is set for August of this year. For developers from Amplitude studio, the 4X genre, or "grand strategies" that are about exploration, expansion, exploitation and finally extermination, is nothing new. But now, the usual SF vibe was replaced by historical realities. Associations with the cult Civilization are very much in place. Are we looking at a change of leaders? 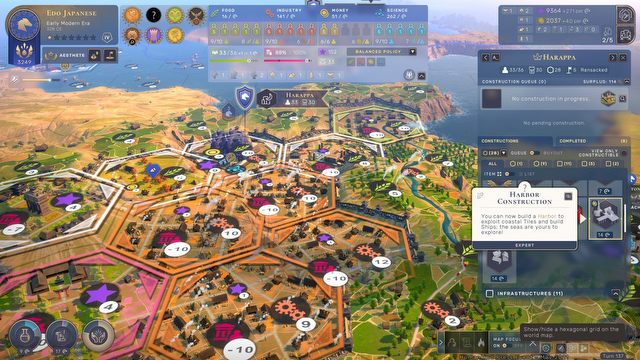 Its name was chaos and confusion... The interface in Humankind can be overloaded beyond all reasonable limits.

There's been a few mishaps during the development of Humankind, and delays were encountered. Some time ago, I had the opportunity to play the demo a little bit, and in general, two months before the release, the whole thing seemed to be technically perfected, maybe with the exception of some minor details like text being a little too close to the frames of the windows. Other things may have escaped me, however, because, one  games of this kind take quite a lot getting used to; and two  Humankind flooded me with information. The screen looks a bit like a meadow dotted with all manner of flowers and weeds, each having its own meaning. 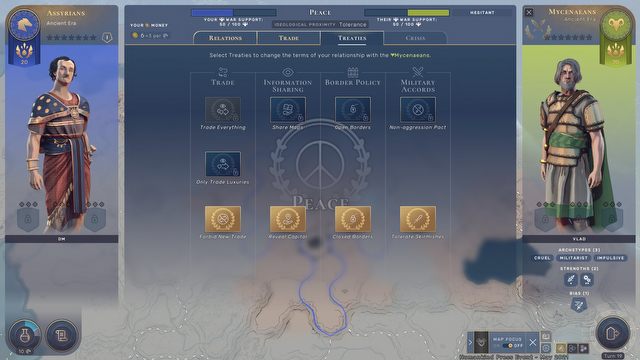 Diplomacy is key, and so the diplomacy tab is visited quite often.

I see so much I hardly see anything

This is actually my biggest problem about this game. The interface is overloaded  it shows lots and lots of little icons, symbols, and messages. We can make things even worse by including extra icons for each field on the map and a few other things. It's a little hard to keep track of it all and distinguish between what's important and what isn't. At the same time, the game doesn't display other relevant information, such as the ability to build new units in a city after inventing some key skill.

In general, finding icons of units to create requires scrolling down the city properties window. Hopefully, this will be addressed, if at least by a proper tutorial. However, I have to point out that I'm not a huge fan of the 4X genre, and I play Civilization recreationally, mainly because of the sentiment to the original. Perhaps greater enthusiasts will appreciate quick access to a good amount of data. 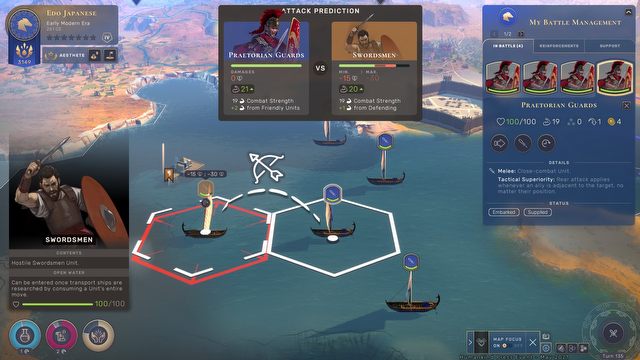 Battles are mini games of sorts, and they're quite complex.

The complexity of many elements is probably Humankind's calling card, something that sets it apart from Civilization. There's much more emphasis on diplomacy, religion or expansion of cities. When erected, our metropolises extend into multiple hexagonal map areas with separate districts divided into agricultural or industrial regions. You can also decide to build a regular school in them, for example.

During the show, we were introduced to the important role of diplomatic relations, which are useful not only during wars, but also in trade, alliances, and also introduce various bonuses to the gameplay. The authors were particularly proud of their unique "crises system."

Whatever you do in the map may trigger crisis, very similar to what its happening in the world all the time. You do something, others react to it, put themselves into that crisis and then it escalates or de-escalates. It is a very interesting concept. It can be used in a very effective way.

If you prepare for war, the diplomacy system is definitely where you wanna make a point and justify your actions, demands

While on the subject of war, it's worth mentioning the combat system, which is also slightly different from what we know from other 4X positions. When battles occur, a sort of separate board game is fired up, converting a certain area of the map to a battlefield. The first thing is the uncertainty of whether there will be a fight at all, because there is the possibility of withdrawal at any time. The lay of the land also proves to be extremely important. If the slopes too steep, the army at the bottom will not be able to directly approach the enemy at the top, nor to even attack them effectively. Units in the forest, on the other hand, will be invisible to the enemy until they are out in the open. 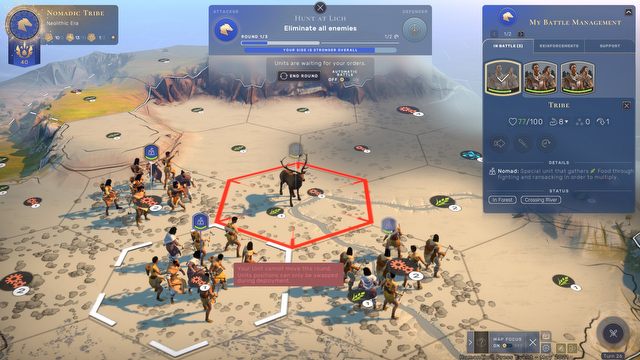 Animals can be as dangerous as hordes of Bandits in Civilization.

Turn-based moves can be queued, or fought simultaneously on land, sea and air. Sometimes with large armies, the battles can last really long by the standards of the genre, especially since you can also call in reinforcements. At the very beginning, however, we face similar battles with... animals! In Humankind, the role of the barbarians has been entrusted to deer, mammoths, and other big game, and the hunting is no different than battles. Fortunately, there is an automatic combat option  after hovering a unit on the enemy, the system calculates the result of the skirmish in a second. It's cool this option is here.

The creators also drew our attention to the narrative events system. We've seen something similar in Paradox games before, and it introduces story elements to the gameplay. In my case, I was faced with the choice of how to chronicle the death of a great statesman: truthfully, that is, he died after banging his head on a doorframe while pursuing a half-naked ambassador, or by embellishing his biography at the request of his son and proclaiming that he lost his life on a hunting trip while fighting a great beast. 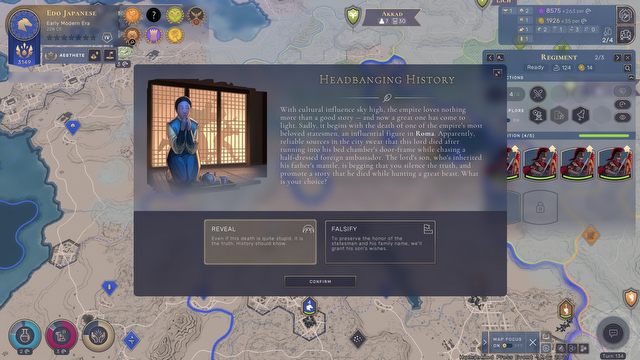 Narrative events add a lot of variety to strategic gameplay, and our choices can make a difference in the future.

Another story involved a tribe we encountered, made up exclusively of children. Standing among the bodies of the dead, they mourned, and I could either take them in, gaining a new unit and a chance at another narrative event, or retreat to avoid risking the outbreak of some sort of plague and increase my speed for the next five turns. Such events are presented in text form, of course, but they always prove to be a pleasant diversion from moving pawns on the map.

You do get narrative events that emerge dynamically based on your play style and the game context. These evolve through the eras. There will be new events for each era and context. Some of these events have repercussions, like a second or third part, because your choices have a significant impact. 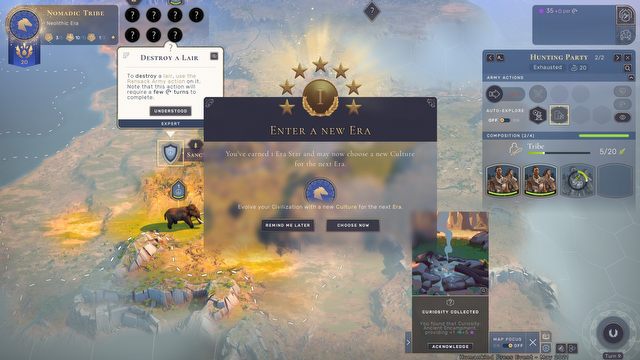 The progression system in Humankind is artificial, and ostensibly so.

Now that the studio's boss has brought up the eras that will be crucial to the gameplay, I still have to mention a thing that I didn't quite like about it. This system is directly related to development and progression in the game. We begin in the Neolithic period and move through the ancient, classical, medieval, modern, and industrial eras  all the way to the present. Advancement to the next era is contingent upon earning a certain number of stars, each corresponding to significant achievements in various areas. The thing is that after you've collected all the stars, the game waits until you yourself confirm your desire to move on to the next era.

I completely failed to feel any development or progression in this system. I remember that in Civilization, it would happen very naturally and smoothly. I invented the wheel  chariots appeared; I invented masonry  new buildings became available; I invented gunpowder, and I got access to cannons and rifles. Architecture in the city changed with development and subsequent inventions. Here, on the other hand, you can be stuck in the tribes era until boredom, until you click through all the interface screens, and it seemed to kill the pacing for me.

The advantage, on the other hand, is that you create your nation based on a mix of different cultures. In the Civ, we defined the characteristics of the leader of a nation at the very beginning. Here, at the start, we only decide on their appearance. Then, with each era, we can choose the characteristics of one of ten cultures, for example Egyptians, Romans, Greeks, Nubians, with each of them specializing in different things, in a way determining our style of play. With some, it's military conquest, with others, fortification of cities or trade. It's a bit like creating character builds like in MMORPGs, and it raises questions about gameplay balance. Some options may produce better results than others. What do the developers say about this?

We love balancing the unbalanced. The game being live is a part of that process, of together finding out.

So, we should conclude that the game is pre-balanced, but only countless ideas from the gaming community will really show if there will be something left to fix. This is quite significant because one of the attractions of Humankind is supposed to be multiplayer mode for up to 8 players. Also interesting seems to be the idea of creating your own AI persona, which can be passed to friends to fight with us (or rather with our virtual avatars) in the single-player mode. How it works will become clear after the release. 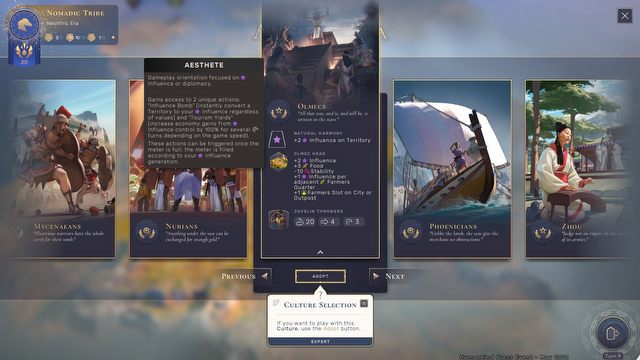 What's interesting, there are six times when you can select your nation, effectively creating different builds of... nationality?

What kind of mark will you leave?

On the one hand, Humankind seems quite intimidating with its level of complexity and sophistication. It probably won't be the same loose and fluid gameplay I know from Civilization, but rather a production for the most avid fans of the genre. Alongside that, however, there are things that seem intriguing, namely the narrative events, or some of the things barely hinted at in the show. In the game, the threat of global pollution will appear, for example, and only by acting together with other nations it will be possible to remedy it. I'm very curious to see how this was accomplished with AI-driven opponents. There's also things like a nuclear war or space race waiting at the end of history. It will be only up to us to decide what happens to the world. It's supposedly a 4X game, where it's not so much about exploration, expansion, or exploitation, as it is about becoming etched in the history. I hope I have enough patience and UI discernment to be able to achieve that.