With all these facts in mind, GTA: San Andreas becomes a different game. CJ and his buddies aren't just some dudes playing gangsters  the backdrop of the story is a direct reference to the war between the Bloods and Crips, though of course (despite all the brutality of the GTA series) it is a bit toned down. Since the very beginning of the story, Carl Johnson participates in the typical gangsta life in Los Angeles of the period.

After leaving the airport, he is forcefully taken into a police car  as if by order of sheriff Daryl Gates. Right after that, when he's thrown out of the car, he has to escape hostile turf  staying there would be a death wish, both in real Los Angeles and in the game. Later, CJ and his gang are fired at from a purple Ballas car (gangs in Los Angeles, where no one walks, prefer to attack from inside a car). CJ's gang, Grove Street Families, is much weaker than the Ballas, but this does not prevent them from striking back. During the iconic scene on the cemetery, we see Sweet, CJ's brother, showing him the tombstones of their late friends. He describes the madness of those times in one sentence: "Everybody shoots first, then ask questions later." 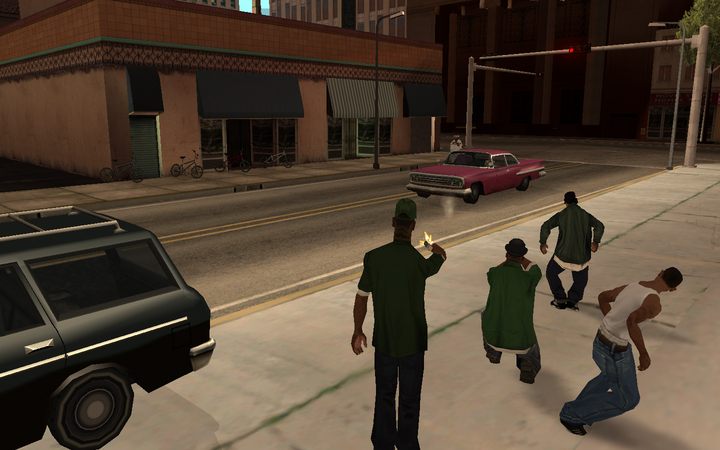 Drive-by  the go-to method of settling scores between Bloods and Crips  is the welcome CJ gets in LS.

CJ's subsequent activities in Los Santos include spraying GSF graffiti over Ballas' tags, and mercilessly solving a problem of drug-dealing competition. Things become even more heated then; we enter a car chase, and at the end of his peculiar initiation, Carl goes shopping for illegal weapons. During the first few missions, the plot of GTA: San Andreas hits us with everything that happened daily during the apogee of the Crips and Bloods gang war in Los Angeles in late 1980s and early 1990s  without any exaggeration. And then, the tasks associated with the gang war even more vividly hint at that dark reality.

NOT JUST CRIPS AND BLOODS

Gangs of LA are of course not only the Crips and Bloods  especially now, that Latin gangs have started to play an increasingly significant role. In GTA: San Andreas and GTA V, we find a significant number of other gangs, although, as in reality, their significance in the conflict between the Families and Ballas was very limited  some entered into alliances with each other. For order, however, we should mention a few key gangs from both games that have their obvious real counterparts.

This was a Latin gang based on the original Surenos group (Sur 13), which cooperates with Mexican cartels. In GTA: San Andreas  the strongest Latino gang in Los Santos and the second most powerful after Ballas. Hostile towards Grove Street Families.

Another Hispanic gang, based on the 18th Street  the largest international criminal group in Los Angeles. In the game, it was friendly towards Grove Street Families, although in reality, some sets of Crips and Bloods were its enemies.

In GTA V, we also meet members of the Marabunta Grande gang, which in Los Angeles is known as Mara Salvatrucha (MS-13). This is a serious and extremely violent international crime group consisting of immigrants from El Salvador. However, it does not play a big role in the game  it's the gang that Michael tried to sell a large yacht to, at the beginning of the story. 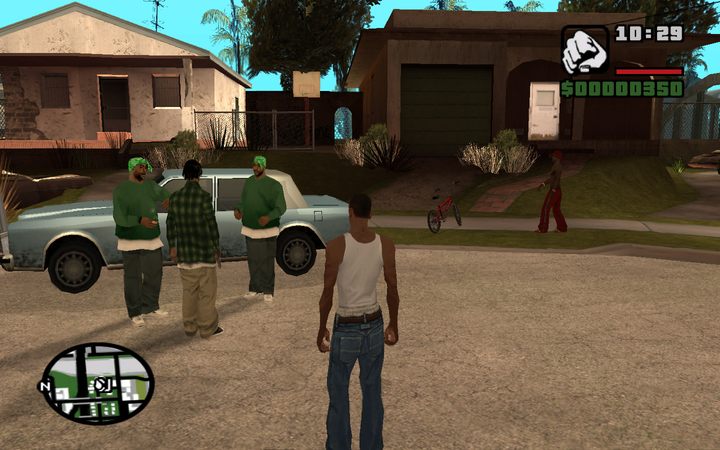 Is CJ a Crip or a Blood?

Grove Street  the iconic street where CJ's family house stood, the heart of the Families turf, which we can also visit it in GTA V, is not based on any particular location. We could try to correlate it with satellite pictures of LA, and we could assume it's Spruce Street, but it's actually empty. Besides, the cul-de-sac type of street is very popular in Los Angeles, and indeed most American cities. In Compton city, there's not too many of them, and those that exist are in Bloods turf  such as near Piru Street and Avalon Blvd.

At one point, following a tip from a friend Ryder ("Get yourself some colors fool!"), CJ must dress in clothes of the right color. Because the colors are a point of honor for the gang! Blue and red for Crips and Bloods, green and purple for Families and Ballas. Right... so who are we actually playing in Grand Theft Auto series? Both CJ in GTA: San Andreas and Franklin in GTA V are part of the Families gang  but is that actually Crips or Bloods?

If we look at all sorts of opinions on the Internet, especially the people from Los Angeles themselves, we will find many opinions that Families are Crips and Ballas are Bloods  perhaps because of the vocal similarity of the latter. However, opposite opinions are also widespread  Families as Bloods, and Ballas are Crips. A more precise examination reveals a certain principle: people who are convinced of the first theory, usually settle for this one, brief explanation. In the second case, there are often numerous arguments why Ballas actually correspond to the Crips. Who's right? It's hard to give a definitive answer.

First of all, it wouldn't be too reasonable for Rockstar to, like some hip-hop artists, sympathize with either of the real gangs, even ironically. Instead, the creators made the only right decision, and mixed up the characteristic traits of Crips and Bloods in the gangs of Ballas and Families. 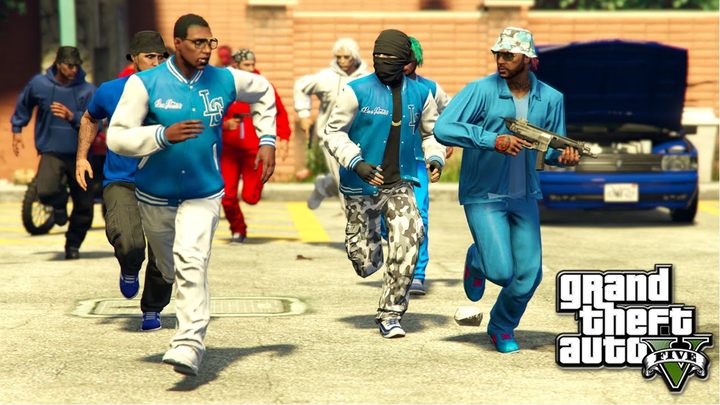 Some mods for GTA turn fictional gangs into real ones.

The biggest argument in favor of the fact that Ballas are Crips is the fact that both gangs are more powerful and numerous. The purple color of the Ballas is the secondary color of the Crips (and in the case of the Grape Street Crips set, even the primary). On the other hand, the Families are divided into hostile sets: Seville Boulevard, Temple Drive, and Grove Street  just like the Crips sets that are fighting each other. Then, there's the word "loc," used by the Crips to address other members of their gang, and in the game assigned to Families (one of the memorable characters of San Andreas is OG Loc, the word is also used by Lamar to address Franklin in GTA V). However, unlike the Creeps, the Families are weaker and less numerous. And green is the secondary color of Bloods.

MODDERS TO THE RESCUE

Both GTA: San Andreas and GTA V offer graphic mods that replace virtual gangs with real ones. It's interesting that in the case of GTA V, we can substitute the Families with both the Crips and the Bloods. Rockstar made it pretty confusing!