The period after the riots, as well as the truce between the Crips and Bloods brought something else  the astonishing flourishing of gangsta rap, which became one of the biggest genres of the 20th century. After the previous successes of Ice-T and the N.W.A. and the album Straight Outta Compton, Dr. Dre's first solo album became an even bigger hit, Chronic, released in late 1992. Soon thereafter, there were huge successes for Snoop Dogg and Tupac Shakur  all from the Death Row Records label. 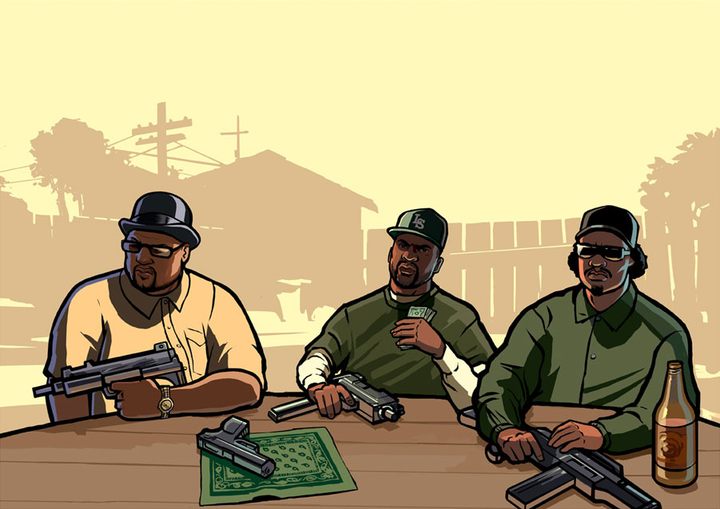 Death Row Records is the best example of how two hostile gangs cannot only function side by side, but also work together, sharing profits. The Death Row boss  Suge Knight  wasn't bothered about Snoop Dogg proudly wearing the blue shades of the Rollin' 20's Crips set, while he himself sported red Bloods' accessories. Of course, there was no question of complete peace and merry abandon. Knight ran his label in ways far beyond the provisions of the labor code, and the famous murder of Tupac, most likely by members of the Southside Crips set, served as one example of the conflict that's still smoldering.

However, even the brutal murders of the stars could no longer damage the image of popular music. To the despair of the sheriffs of the city of Angels, the bloody world of drug trafficking and violence, through the lyrics turned into a romantic struggle for a better and decent life. The characteristic C-walk dance performed by members of the Crips gang, once strictly banned from MTV, is now a cult dance move compared to Jackson's moonwalk. Self-proclaimed sets of Crips have sprung up among Asians, white communities, and even in London, or Amsterdam. Being a West coast gangster has just become a fad.

The people of Grove Street are the N.W.A.?

The huge success of gangsta rap was also reflected in GTA: San Andreas. Throughout the story, we accompany at least a side story of Jeffrey 'OG' Loc, who is striving to become the best rapper in the world. However, much more interesting is the theory about the main characters of the game, whose faces bear uncanny resemblance of the members of N.W.A. Even though PlayStation 2 didn't really allow photorealism, it's hard to deny that Ryder looks a lot like Eazy-E. In addition, Sweet totally looks like Ice Cube, and Carl Johnson like Dr. Dre, Big Smoke like Suge Knight (according to another theory, more like Notorious B.I.G). 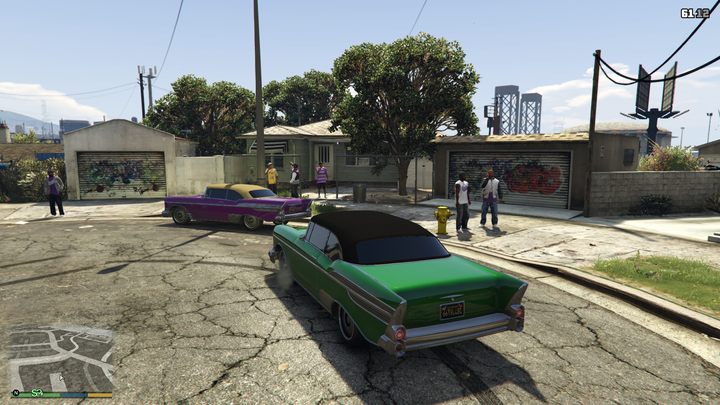 A visit to Grove Street in GTA V reveals that the former territory of the Families has been taken over by the Ballas.

Today, thanks to the appeals of local authorities, the conflict between the Crips and the Bloods no longer resembles the blood pit of the early 90s although the "blue" are still a tens of thousands strong. South Los Angeles has changed. Compton is now dominated by Hispanic population, and gangs have largely moved their business to the Internet. 21 years after the events depicted in GTA: San Andreas, we return to Los Santos in 2013 with the game GTA V. This time in the role of Franklin  a member of the Families gang, the Chamberlain Gangster Families set, to be precise. What has changed during this time in the virtual Los Santos?

The silence of war in the real world can also be seen in GTA V. Gang disputes between Ballas and the Families are no longer the subject of the main storyline  they only occasionally appear. The creators have not forgotten nostalgia in this release, and a return to Los Santos means many references to GTA: San Andreas. We can go to Grove Street and see CJ's or Ryder's houses again, but unfortunately only to learn that the turf now belongs to Ballas. Carl Johnson himself, on the other hand, is alive and well, which can be overheard in the phone conversations the members of Chamberlain Families. However, even on Grove Street, in the midst of a hostile gang, Franklin must really try to get a random member of Ballas to attack him. Large battles only happen on-online, where the Gang Attack mode is available. 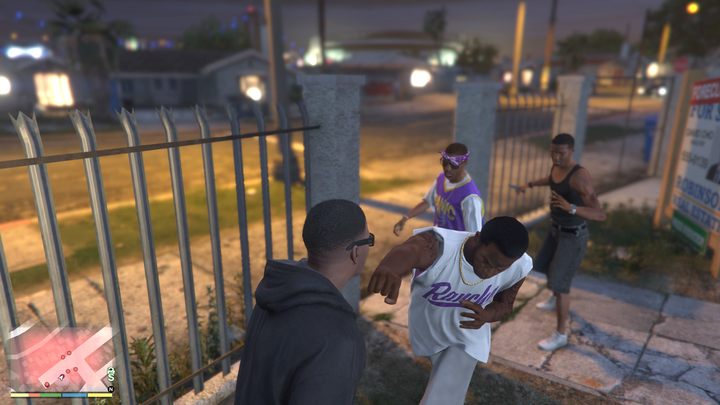 Fights with Ballas are only sporadic in GTA V.

In GTA V, the former mentality of the Crips and Bloods was portrayed beautifully. If we, as Franklin, attack our people, only the members in the particular set will respond (there are three of them in the game). Sometimes, it may even happen that another set of the Families will come to our aid. This isn't possible for the Ballas, which is how the authors refer to the fratricidal struggle of the Crips among themselves, and the unity of Bloods in the real world. The creators messed up the gangs' colors  but it may have been about making it clear who's the enemy. Currently, the groups no longer wear their symbolic colors, considering it a display of stupidity, begging to be arrested. In the game, on the other hand, it's still about the green and purple.

Each individual installment of the Grand Theft Auto series will forever be remembered for the magnificent depiction of the atmosphere of the decade they portrayed, how artfully they referenced movies and the world of pop culture of the time. GTA: San Andreas, however, is worth highlighting for a completely different reason. While many game publishers run away from the latest, often tragic stories, altering the scripts, graphics, or completely abandoning the release of the games, Grand Theft Auto is always quite the opposite. When the game came out in 2004, those events were still very vividly remembered my many, having happened merely 12 years before. These were tragic memories full of suffering, but they'd made the story more genuine and credible. Maybe that was due to rap music, maybe some other factors. Today, this is not that important  it's worth remembering that GTA: San Andreas is actually much, much more than a game about gangsters.