Soulslike games are brutally difficult, but there is something addictive about getting back up after they knock you down. Look at Elden Ring and tell me you haven’t spent at least 40 hours playing it by now. Maybe we are gluttons for punishment, but the genre is becoming more and more popular with many developers creating their own titles inspired by the soulslike experience.

In fact, this was nowhere more apparent than at PAX East where I played a slew of titles that were not only difficult but made me want to play them even more. Sure, I sometimes had to have the developer play it for me because I died too much, but their unique designs, stories, and special features definitely caught my attention. Here are five of our favorites from this year’s show.

Asterigos: Curse of the Stars

Developed by Acme Gamestudio, Asterigos: Curse of the Stars quickly welcomed me into its Greek and Roman-inspired fantasy world thanks to its rich colorful palette and Pixar-like design. The game lets you play as a warrior named Hilda who needs to fend off monsters in a world that is being destroyed by them. The game was just announced at the start of PAX East, so little is known about the story, but the demo I played gave me a taste of what to expect.

Asterigos: Curse of the Stars, developed by Acme Gamestudio

Publisher Tinybuild also told me that the game is “more approachable” than other soulslike games mainly due to its colorful setting but also because combat is more forgiving. Enemies can get problematic, but with some quick dodging or shielding, defeating them wasn’t a problem. You can always change weapons and pick the sets you want to focus on, and this becomes more important when engaging in boss battles.

These encounters resemble those of a Monster Hunter game and reward careful thinking and memorizing attack patterns. Each demo station was set up with a unique weapon loadout, but the actual game will let you swap out weapons on the fly to try out different ways of taking down enemies. The boss I had to defeat was this giant crocodile-like monster that did jump and water attacks so I can only imagine how epic some of these battles will be.

My time with this early build of the game lasted only about 10 minutes, but what I saw definitely made me curious for what’s to come. Asterigos is planned to release later this year for PC and consoles.

Set in a post-apocalyptic world and featuring Welsh themes and settings, No Place for Bravery is an impressive and difficult game that is more than just hacking monsters and making it to the next checkpoint. Executive Producer Matheus Queiroz told me that the game is forged by a sad, but common problem that is endemic to Brazil and other countries around the world – growing up with a father. These familial themes push the narrative forward as you play as Thorn who goes searching for his daughter while keeping his disabled son safe from harm. 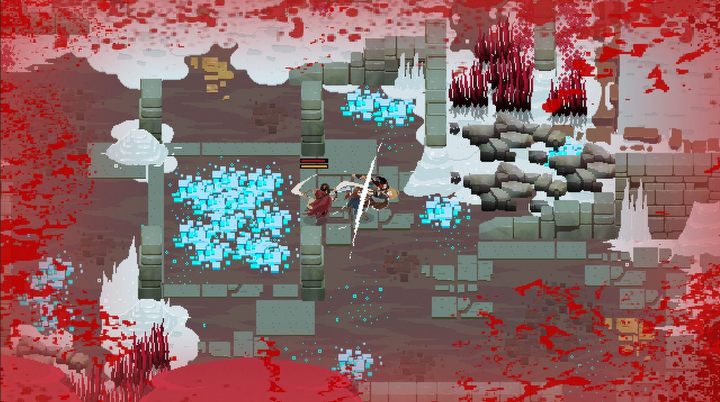 No Place for Bravery, developed by Glitch Factory

Each level looks like a pixelated haven featuring colorful forests, landscapes, and vistas that also contain various enemies that you need to defeat in order to move forward. The game is gory as it is beautiful so expect a lot of violence when you behead monsters and slice them up with your sword or smash them with your hammer.

Inspired by games like Sekiro and Devil May Cry, demo of the game I played featured two types of levels that showcased the game’s emphasis on combat but also on environmental puzzles that punish you for making too many mistakes. Expect a world that comes alive the more you play, too. At one point after acquiring a hammer, for example, I had to remember to retrace my steps and go back to an inaccessible area that was now open thanks to my new weapon. Matheus mentioned the game has “lots of different kinds of enemies so each one has a specific behavior that you need to exploit. Combat is essentially a puzzle.”

No Place for Bravery is shaping up to be an amazing experience and is expected to come out later this year for PC and Switch.

Oricru stands for “Original Crew” and in this action RPG with soulslike elements, you are the last of the original crew of humans who landed on a strange planet where factions are at war. The game emphasis the importance of choice-making so while you still have to worry about the usual elements in the genre, your decisions can also impact how the game plays out and what ends up happening throughout your playthrough. 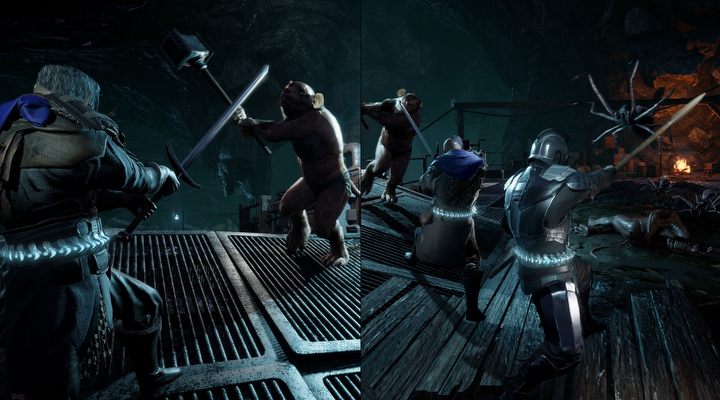 Koch Media PR Manager Tobias Stolz-Szwilling played alongside us throughout the demo’s main level because – guess what? – the game also has a dedicated couch co-op mode that actually lets anyone drop in and drop out at any checkpoint. This second player mirrors the first player’s stats and equipment, but you can rearrange your stats at the start of a session letting you create a co-op partner that can essentially play like a tank, ranged rogue, or any other class you think will benefit you in that particular section. Two players can also perform a cool lightning attack with the right weapon that creates this energy beam between you decimating any enemy in its track. It’s quite satisfying.

The difficult scales if you play with someone else, of course, but you will still need to hone your skills as Oricru is tough. I died a lot even playing with Tobias, but after memorizing some enemy attack patterns I managed to stay alive for a bit longer. What’s great about the game is that your choices and relationships with its individual factions will essentially change how the story plays out, where the level starts, and who you end up fighting.

The Last Oricru’s co-op system and rich branching storyline that changes based on your choices made it a standout for me as I can’t wait to see what else the game has it in store. Expect it out on PC and consoles later this year.

Playing as a stick figure may not seem too appealing at first, but the more you play The Last Hero of Nostalgaia the more it makes sense. With a narrator that will instantly remind you of The Stanley Parable mixed with “Monty Python”, the game is a true linear soulslike that features a plot that is bit self-referential and combat that will make you work for it. 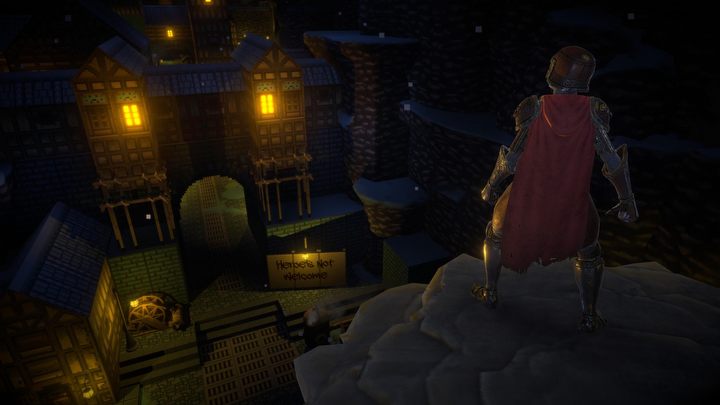 The Last Hero of Nostalgaia, developed by Over the Moon Games

Set in a kingdom that has been afflicted by a “pixelization” plague, you play as a warrior who can’t get any sicker because he is literally a stick figure. Even the game’s character creation system pokes fun at the genre since it gives you so many options to choose from, but the end result leaves you looking like, well, a stick figure. You can, however, choose a class which will impact how you fare in combat.

The demo I played was only a few minutes long and features one main level, but it was enough to remind me that these types of games can be difficult if you don’t go into a battle with a plan in mind. You can, thankfully, adjust your difficulty over three settings so the game is also generously accessible. As I played, the game’s backdrops kept changing to emphasize how the world was impacted by its plague, and it was great seeing certain areas look more pixelated than others. Reaching a checkpoint restores the area’s visuals and makes them more 3D in nature. And even though you’re a stick figure, your enemies and even the more powerful weapons you get later on will be in 3D and in higher fidelity giving the game this cool mixed art style.

Blocks, parries, and timed attacks are you friend here as the game is tough despite its kooky exterior. Expect The Last Hero of Nostalgaia out later this year.

Dolmen was a game I remember playing at PAX East back in 2018 so seeing it at PAX East one more time before its release later this year was a nice surprise. With an atmosphere of Dead Space and a combat system reminiscent of Dark Souls, the game is a tough action RPG that is sure to give players a good challenge.

Dolmen takes place on an alien planet where you uncover some truths about where you are through exploration and the discovery of crystals that offer you different elemental powers. The demo I played let me create my own character and select a class that changed how I would fight – ranged, mixed, or more melee in nature. As with other games in the genre, leveling up lets you increase your stats, but this initial class essentially shapes how you approach combat, and boy, is it hard. 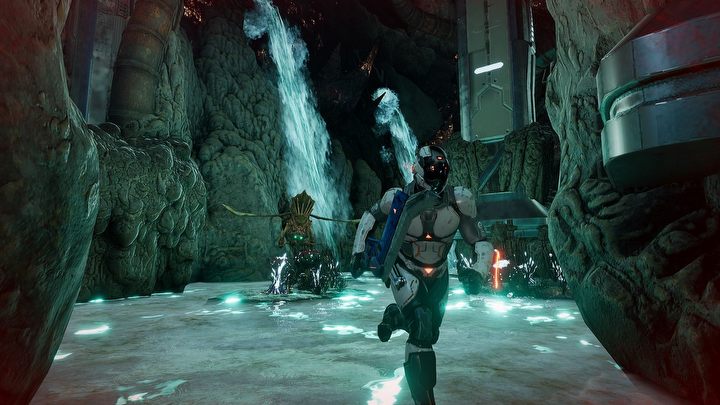 I died a lot during my playthrough so much that I asked developer Mass Work Studio’s Gabriel Ferreira to take over, but in doing so he revealed some cool features like energy mode that lets my character do extra damage in the element he has equipped. Elemental attacks play a huge role in the game as some enemies I encountered were weak to acid attacks making it easier to defeat them. The boss battle, however, was not only what you would expect from a soulslike game, but showed off some impressively devastating attacks that will have you relying on your environment for protection. In case you were wondering, I died within minutes.

Besides just combat, Gabriel also walked me through the game’s hub that lets you visit your ship to level up, craft weapons from all the items you collect from enemies, and even respawn bosses if you want to go back and harvest more rare materials. He also explained that during boss battles, players will be able to search dedicated lobbies for other players to tag-team it together.

With its sci-fi aesthetic and intriguing crafting system, Dolmen is sure to give players a unique soulslike experience with enough unique qualities that make it a challenging joy to play. Catch it when it comes out later this year on PC and consoles.

We were at PAX East and played a lot of great upcoming games. Here are the best games from PAX East. RPG, shooters, indie games – all you want and all you need.

So far I've been bouncing back from FromSoftware games, and from Elden Ring on the other hand I can't tear myself away. Great exploration, fascinating world or satisfaction from defeating each boss make my adventure will not end soon.

Afraid of jumping into Elden Ring because the level of difficulty might drive you crazy? No need! The developers took care to make the game less stressful and depressing. Most importantly, they achieved this in an exceptionally neat manner.

Soulslike is Great, But We Need More Soulslite

People who push FromSoftware for easy difficulty levels in Sekiro or Dark Souls are violating the creator's sacred right to make their work whatever they want it to be. And at the same time, they're kind of right...