Fans of role-playing games do not have many reasons to complain nowadays. RPG games come in all shapes and sizes, with a new game coming out practically every few weeks. Gone are the days when we had to scramble to every new game that offered at least decent level of quality. Unfortunately, a side effect of this is the fact that many interesting projects go by unnoticed.

We decided it would be a good idea to get you guys a list of games worthy of attention, but easily overlooked during the last few years. When creating the list, we were guided by several criteria. First and foremost, we chose games that reaped good reviews and scores, especially those awarded by the players themselves, but at the same time had modest sales results. In general, we chose those games that generated less trafic than average, so that there's actually something on this list that you haven't heard of.

We felt it was a good time to refresh this piece. As part of the update, we added the number of reviews on Steam for each game and completed the list of platforms on which the title can be played. Also, a new production appeared on the last page.

Matt Lugowik was responsible for updating the text.

YOU WANT TO ADD SOMETHING?

GRIMOIRE: HERALD OF THE WINGED EXEMPLAR IN A NUTSHELL

In early August 2017, something happened that seemed impossible – the game Grimoire: Heralds of the Winged went live. It seemed like a game that would forever remain in production, never actually coming out. The development cycle of this title lasted for more than twenty years – and the first intended date of release was 1997!

The final outcome of this was obviously a game outdated about a decade, but at the same time surprisingly good! The easiest way it can be described is "a heir to Wizardry 7." The developer, Cleveland Mark Blakemore, worked himself on the classic game in Sir-Tech studio, and then became a consultant in the ultimately deleted sequel, Wizardry: Stones of Arnhem, the creation of which was entrusted to an external Australian company. Blakemore was unable to compromise with the Aussies and eventually quit; the project was abandoned shortly thereafter. Frustrated, he decided to release a title that would be a worthy successor to Wizardry 7, and despite the insanely bumpy development cycle, this task he was able to implement. For the most part. 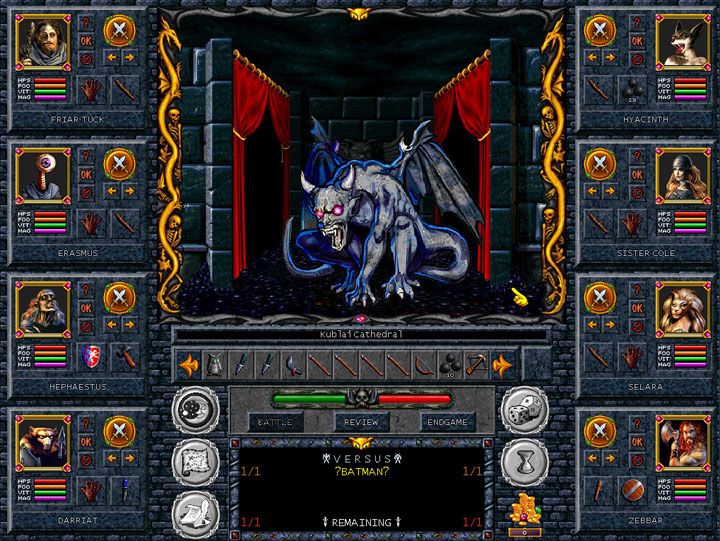 The game was originally supposed to be released twenty years ago, and even then, it would have been a little outdated. It has simple 2-D graphics, a leapfrog motion system, and a highly cluttered interface. Despite this, it's highly engaging. The game is enormous, and you it will easily suffice for tens or even hundreds of hours. Combat is turn-based and rather difficult, and the number of available strategies, combined with the size of the squad (up to eight characters) gives the game incredible depth.

Grimoire: Heralds of the Winged is not a game for everyone. It's a peculiar title – it's rather expensive and is intended for a certain, in principle limited group of players. However, for people with such quaint taste, this is a real gem that should stay with them for the years to come. Today, the game is even more recommendable than the day of the premiere. The author has put a lot of work into it over the last few years. Bigger bugs were neutralized, the difficulty levels were balanced, and the interface was improved.

Grimoire: Heralds of the Winged is a game for you if:

A House of Many Doors