The Sims 4 Snowy Escape, though not without blemishes, is still one of the best expansions in the series. It’s beautiful, and soothing, it adds mechanics that we’ve been waiting far too long for. It’s also another step towards greater inclusivity. As the community grows, the creators are noticeably trying to make sure that everyone feels at home in Willow Creek, Sulani or Brindleton Bay, and even the forgotten Newcrest. Actually, no. The want people to feel better than at home, bacause, you know, we’ve all probably had enough of homes for a while.

From the very beginning, when EA announced more details about the expansion, it was no mystery one of its main elements will be leisure and zen (and winter sports, of course, but that’s not the point now). So, when I learned I would get a chance to interview Graham Nardone, the lead producer of Snowy Escape, I thought that even if you guys wouldn’t really be interested in the expansion, you might be interested in his opinions about the way we should live our lives, or, more precisely, how to survive 2020. Using the occasion, we’ve also talked about the future of Maxis and stuff. 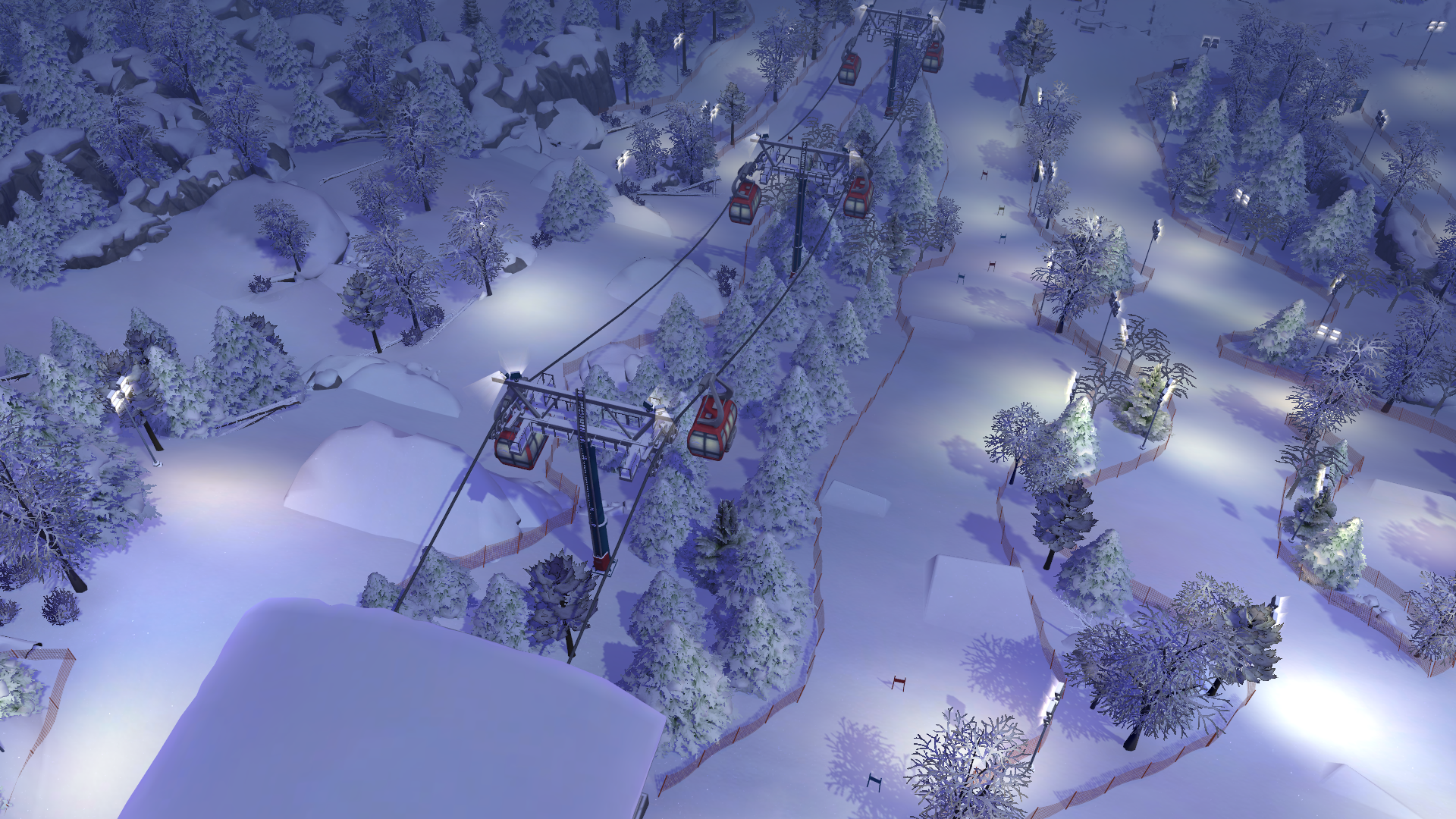 Julia Dragovic: I imagine that when coming up with the idea of The Sims 4 Snowy Escape expansion pack you probably haven’t realized that this would be the only snowy escape for many simmers this year because of COVID-19. Did coronavirus and all the restrictions like lockdown and social distancing affect the idea of this pack in any way during the development process? Were there some changes along the way?

Graham Nardone: Surprisingly, no. I guess in a number of ways we kinda got fortunate with the theme of this one, because I feel like this is kind of the right theme in the right time. It’s something nice for people, where you’ve got this beautiful location in Mt Komorebi that your sims can escape to. And then of course we’re doing the base game update where we’re adding the ability to vacation for all players, so whether that’s to Mt Komorebi or to any of our other worlds, players can take their sims on a vacation anywhere now. I think that’s something maybe we all need right now, which is nice. Fortunately, those plans were all kind of locked in by the time everything started to occur. Actually, earlier this year, when we transitioned to working from home, that was right when designs had just kinda been locked in and we were starting to have the very first initial meetings about how we were gonna implement things. So, it was interesting that it didn’t really influence things, but ended up being the perfect pack for where we’re at right now. It’s funny, we chat about these things internally of course, we even had a town hall meeting recently for Maxis and somebody asked a question about COVID going on. It’s kind of the current event and The Sims often recognizes or even implements current events, or brings aspects of them into the game. So, like, are we gonna do something like masks for sims in-game? Our perspective on it is really more like… The Sims is an optimistic slice of life. We do social events; we do pop culture. But we don’t try to bring the negative aspects of life necessarily into The Sims. The Sims can be a bit of an escape for people so that’s not something that we generally focus on, and that’s why you don’t really see too much of an influence of that within Snowy Escape or within Sims 4 in general.

I have to say I really appreciate that you’ve created a world I can now escape to. I really needed that! What made you choose snowy Japan for the theme of this pack? How did it all start?

When we started planning the pack, it was the winter activities that really came first. And those were something that we were just hearing from players and our community – one of the things they would like to see more of in the game. We actually run a survey about that early this year. So, I think some of our players have had an inkling that we were working on it because we were asking about it, and what aspects of winter activities they would enjoy seeing.

But the Japanese inspiration kind of came from us internally. Once we knew that we want to do winter activities, we started thinking of different locations that might be a good match to draw inspiration from. And it’s kind of funny, a lot of our fans will try and piece things together before we announce them and a lot of them were assuming, we would do kind of… maybe the very first thing you would think of – something like the French Alps. But we like to subvert expectations a little bit and one of the pillars of us, here at Maxis is wanting to bring more ways into The Sims for players to authentically represent themselves and give more of our players around the world the ability to recreate some of their own lived experiences, or the experiences of people they know, within the game. And so we wanted to dive into a culture like Japan, something we haven’t really gone deep on before, because we thought there was something really rich there that we can explore, that would kind of build the pack up beyond just being the winter activities destination. So I think it’s fun seeing that kind of rich cultural side and it does feed back into that gameplay loop in a really nice way, where you’re spending your afternoon with your sims hitting slopes or going on a rock climbing excursion, but then you do get into that more zen side of things, where you can go to the Onsen Bathhouse, relax and restore and rejuvenate your sims. They can gather around this nice hot pot meal and just have a calming but friendly experience with other sims. Or go hiking out in nature. So it’s got this nice kind of dual nature to the pack which is really pleasant.

Let’s not forget relations. Contact with others may be more difficult, but don’t dramatize: we’ve mostly switched to digital media as means of maintaining long-distance relations anyhow. Try reaching out to someone you haven’t spoken to in a while. Find time for things you enjoy. Remember that both hot springs and tents or caves are suitable for a boink. I’m not necessarily suggesting anything. Also, remember: vending machines can kill you if you’re not careful. 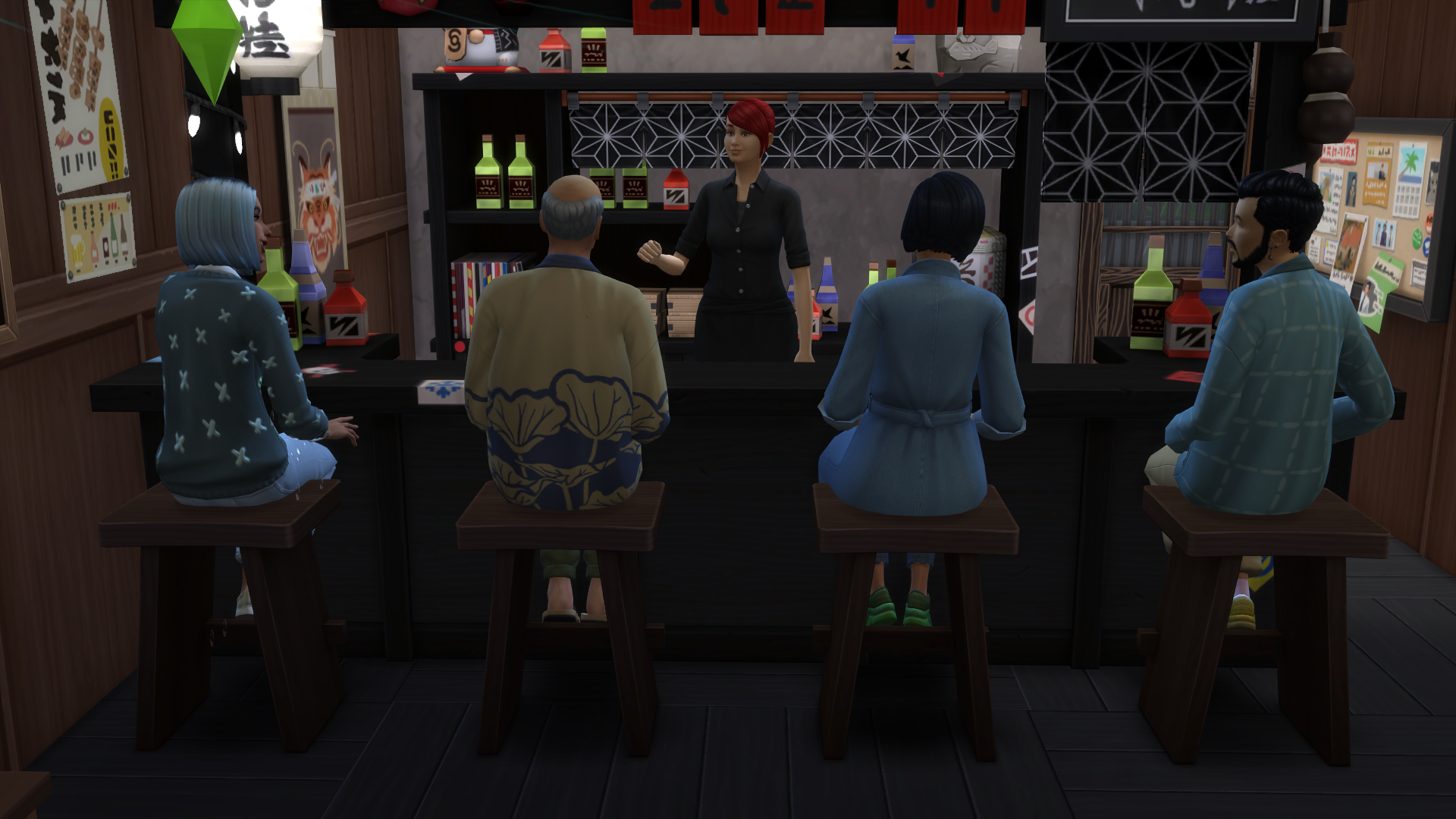 You said Japanese culture is rich and it’s obviously very true, but I think at the same time it’s also still unknown to many around the world. It’s a completely different culture to Europeans or Americans. How do you choose what will work best in a game such as The Sims? How do you pick something from this vast world?

It’s interesting that you mention that, because with any culture that we choose to represent or draw inspiration from, there’s so much history. So much of a rich background with any culture that we’re never gonna fully represent, every aspect of that within The Sims. So part of what we do is look what is an interesting slice of it and you’ve mentioned kind of what the west thinks by default. When you think about Japan, whether that’s America or Europe – I think a lot of us have a tendency to think of this major metropolises: Tokyo, Kyoto, this vast city living experience. And we’ve touched a little bit of that in the City Living expansion pack of course, and so we wanted to go in a completely different direction for this one, and it paired really nicely with the winter activities. Kind of doing something in the Japanese countryside, doing a mountain town. Something a little more remote and getting back to nature. And that was kind of our starting point.

And then we worked with an internal group, we have this employee resource groups in Electronic Arts. One of them is called ASPIRE which stands for Asian Pacific Islanders Represent. We basically worked with them like hey, what are the interesting and important aspects of Japanese culture, that can also translate well to being a fun gameplay experience within The Sims? And worked with them hand in hand to piece that experience together and what that might be like.

Nature promotes relaxation. You don’t even need to go to the resort to enjoy the new surroundings or lush vegetation. As long as you can go out for a walk, you can always explore the neighborhood, focusing on details and keeping a close eye on the surroundings – not only nature, but also, for example, architecture. You’re pretty much guaranteed to see something you’ve never noticed in the most familiar places if you look close enough. In 2020, parks are not particularly crowdy. Having an open world seems obvious, but think about what the sims have to go through. You will immediately appreciate what you have. While it lasts. We’ve never been so much like the sims...

Don't trust anyone. Facts? Don't be fooled. "Facts" are merely a scheme, a global conspiracy aimed at hiding the truth from us. And let me tell you – in post-truth times, the only real source of knowledge about life are The Sims, so pay good attention.

The Sims 5 is Coming – Our 4 Main Concerns

Less content, a free-to-play model, lootboxes or the requirement for a permanent connection to the Internet – The Sims 5 is coming, which we are of course happy about... but we also have concerns.