The headline really says it all. For some bizarre and inexplicable reason we got to see Master Chief make sweet love in the Halo TV series from Paramount. This one moment encapsulates everything that is wrong with this show - a singular fatal flaw (among many) that doom the series to mediocrity.

Like so many other moments in the show meant to be impactful, thoughtful, and ratchet up the stakes, it instead comes across as clumsy, awkward, and serving no purpose. If you’re lost, allow me to bring you up to speed with a quick recap of the show.

Master Chief and the UNSC are in a race against time to uncover two forerunner artifacts which lead to Halo. If the Covenant gets them first then it’s game over for humanity. The genocidal alien baddies even have their own pet human helping them - Makee (Charlie Murphy) who the Chief romances back to the side of humanity. 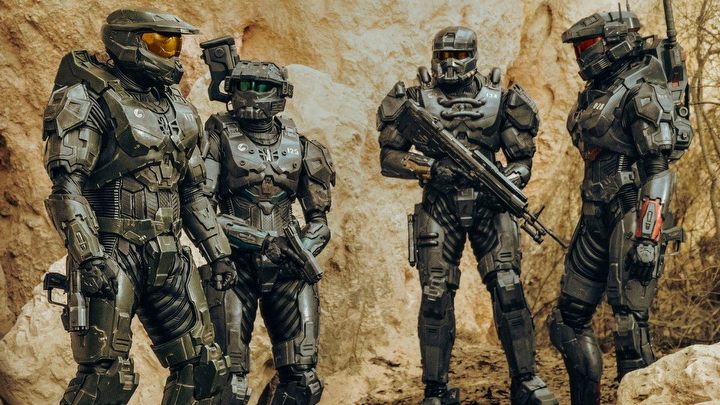 Meanwhile, the daughter of a slain resistance fighter, Kwan Ha (Yerin Ha), is on her own quest which by and large bears zero consequence on season one’s story. If it wasn’t for Chief’s sex scene I would have pegged Kwan as the number one reason this absolute turkey of a show deserves to be forgotten as quickly as possible - her subplot is so generic it feels like it was written by an AI someone fed old Sci-Fi Channel shows.

Let me say though that this isn’t the fault of the actors. For the most part they do a serviceable job and besides some villains as intimidating as a mild cold, the performances are adequate. The problem is they have nothing to work with. The show meanders from macguffin to macguffin without any real sense of tension but plenty of melodrama. The revelations about Master Chief’s past, the family tensions between Miranda Keyes and her mother Dr. Katherin Halsey, and the political intrigue of the UNSC, all amount to nothing.

We already know Master Chief was abducted as a child and forced into the spartan program, we already know Halsey is basically the futuristic equivalent of a nazi scientist, and we already know the Covenant are obsessed with Halo. In the final analysis the show has a facade of taking the Halo universe in new directions but the results are half baked at best.

But let me be specific.

Cortana and The Chief 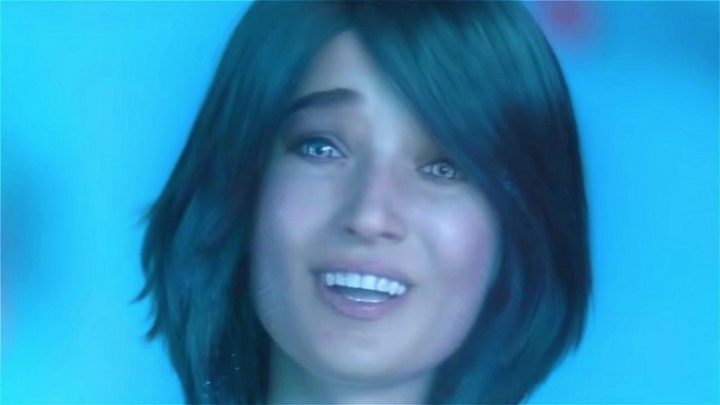 Cortana’s CGI on the show somehow looks even worse than what we saw in the previews. For a show that plunked down some serious cash per episode it’s quite a surprise that Cortana looks as ghastly as she does. The quality of her animations are on par with what you’d expect to see on Saturday morning cartoons in North Korea. She looks flat, lifeless, and dead-eyed.

The writers also seemingly had no idea what to do with her as she disappears for long periods of time, only to reappear for a convenient plotpoint or to awkwardly make a joke at the Chief’s expense. She’s also not treated like a top level military asset as she was in the games.

Instead she’s just another one of Halsey’s mad experiments and gets injected directly into the Chief’s cranium. When the Chief realizes he’s just had an AI put into his brain that could take total physical control over him (you seriously didn’t think of that before you agreed to the procedure?), their relationship stays, mostly, on the rocks.

Going against the grain of the games, and what was a genuine source of drama - the relationship between the Chief and Cortana - feels like a huge miss. Having them squabble and argue just isn’t enjoyable to watch. Them working together (and eventually they kinda, sorta do) is what works best in the games that are otherwise devoid of plot.

Going beyond the games

Any adaptation of Halo (except maybe ODST) has a problem right from the get go: the games are essentially plotless. In the original Halo: Combat Evolved there are basically four characters: Captain Keyes, The Chief, Cortana, and Guilty Spark. That’s it. Everyone else is an extra. To this day we still have no idea how Sargent Johnson got off the first ringworld but even he isn’t really a character in that game. 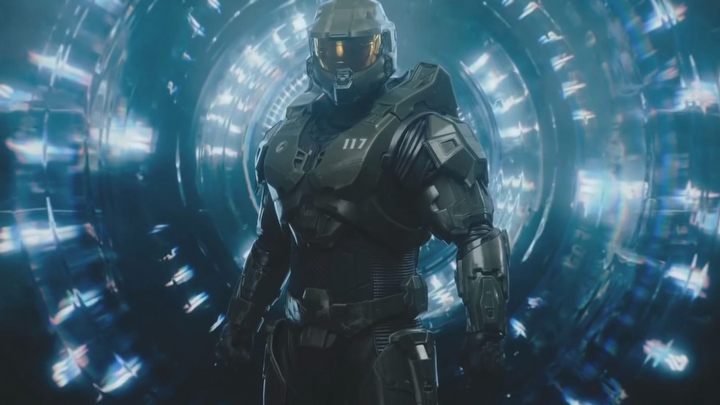 When you have a blank canvas like Halo there are basically a million different directions you can go because only a super hardcore group of fans have read the books and know the lore. I’ve played every Halo game multiple times and I still can’t tell you what the hell the Gravemind is. It follows then that with so much potential the quality of the show comes down to the individual choices the writers made.

And they often chose poorly. Master Chief getting freaky, the show’s bizarre usage of gore and nudity, and pointless side characters and subplots drags Halo down to such a crawl you’d think the show had been sucked into the gravity well of a black hole. If I weren’t being paid to write this I would not have slogged my way through Halo’s nine episodes.

I could go on at length but so much of what Halo presents just feels… pointless. The struggle of the partisans on the planet Madrigal, the schemes of Spartan turned pirate Soren (Bokeem Woodbine), and the obvious evil machinations of Dr. Halsey (Natascha McElhone) all play out to predictable ends and without the visual fireworks you’d expect from a war show based on a hit sci-fi video game. 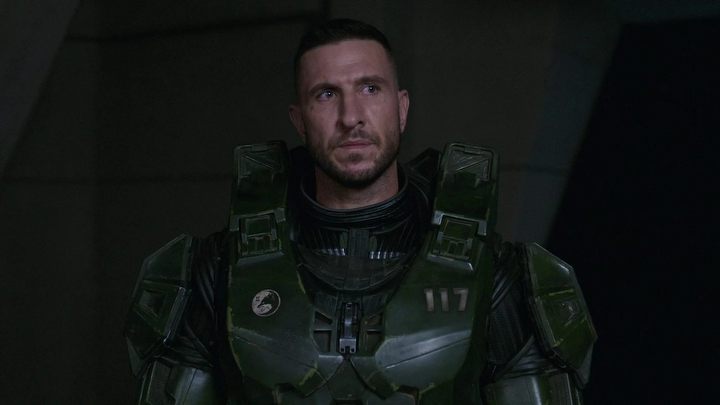 I can understand what they tried to do – tell Sierra 117’s story backwards and unravel the finely spun super soldier that is the Master Chief. Except it doesn’t work. Watching Chief get angry, go rogue, cry, have sex, all distinctly human things, are not what make the character who he is. Sure, he’s stoic in the games, but that’s because he’s been genetically modified and trained from birth to be a ruthless killing machine.

The Chief of the games is someone who sacrificed his humanity so that others could keep theirs. He can’t cry, laugh, or love, because he’s literally physically incapable of expressing emotions. Trying to roll that back just doesn’t work. The USNC also aren’t basically space fascists in the games, they’re legitimately the good guys.

The Chief is essentially the unknown soldier - the veteran you’ve never met but owe your freedom to. His loneliness, his never-ending fight, his commitment to duty is the story of every man or woman who ever picked up a weapon and went off to face their death on behalf of generations they’d never get to meet.

On some level I can’t help but feel they took this route and gave the Chief explicit humanity because there’s already a show about a guy in a helmet fighting aliens – and comparisons to The Mandalorian feel like they were avoided at all costs. The sad thing is the Chief could have kept his helmet on for the entire show (instead of taking it off every two friggin’ seconds) and it would have been fine if not better than the final product.

Where do we go from here?

The series has already been greenlit for a second season so we’ll unfortunately be subjected to another nine episodes of plodding pacing and wildly discrepant CGI quality. I didn’t find an organic place to mention this earlier but the first season distinctly lacks action. The show is about 80% pacing around futuristic military bases and 20% actual battles. If somehow, someone working on the show reads this, consider flipping those numbers around.

If they made a Doom Eternal show, I would happily watch the Doomslayer stomp demons into red paste for an hour each week. He doesn’t even have to talk, just let us see him rip and tear in glorious CGI. Instead, with Halo, we got what looked like in one scene the UNSC being attacked by a swarm of angry penises. The final battle of season one fizzles out like damp fireworks. Halo fans should just go replay the games. That warthog ride at the end of Halo 3 is still a blast.

If you watch it for yourself you’ll find there’s a lot more at work that makes Halo the series a mediocre slog. At the outset I didn’t really understand the criticism of the first episode, it wasn’t anything special but nothing hinted at the middling TV to come. But I get it now. I definitely get it.

Fans Divided Over New Halo Show, but What Exactly Were They Expecting?

The series based on the famous video game, Halo, has proven to be quite controversial. It's interesting because most of the allegations concern the storyline - which has never been a prominent feature in the Halo series.

Business is business. When numbers stop checking out, studios are closed and servers are shut down. That's when legends are born, like the one about the fourteen payers who refused to let a cult FPS go to oblivion.