Alright, enough of the Rockstar comparisons. Let's talk Deus Ex. Cyberpunk clearly shows inspiration with many different games, but this legendary series is certainly among the most significant role models. I can remember how our editorial team tried to figure out what hacking was about after one of the presentations. It seemed complicated and difficult. It's another aspect that seemed a tad disappointing in the end.

The most outlandish element of hacking in Cyberpunk is, in my opinion, the Breach Protocol. It snatches you out of gameplay, switching screens and even music, making you solve a puzzle even for a few dozen seconds. I much preferred the solution from Deus Ex: Mankind Divided, where dynamic hacking was introduced in the form of an immersive mini-game. 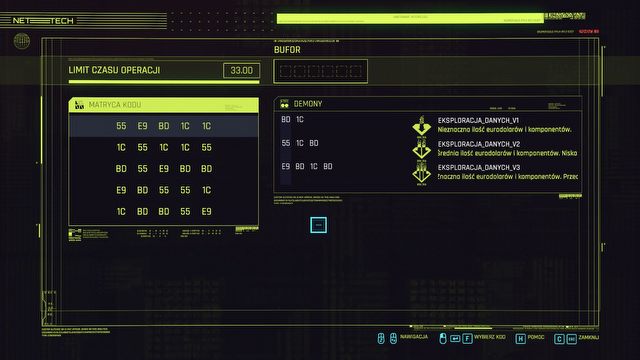 The game could have made a much better use of cyberspace interactions.

It's no big deal, but it would have been easier to swallow it if the quickhacks worked better. We had high hopes for this mechanics after preview materials, seeing opponents shoot themselves in the heads or get knocked out cold by training bots, all done remotely, using netrunner skills. It's a pity there aren't many chances to achieve those affects in the final version of the game. Using hacks in the heat of battle breaks the rhythm, requiring the action to be slowed down for a few seconds, as we try to click the appropriate item on a fairly long list of available actions. The option of assigning quickhacks to hotkeys should have definitely been an element of gameplay. Any sort of animation accompanying their use wouldn't hurt either.

I also feel reluctant to compare hacking in Cyberpunk and Deus Ex. After all, the latter boasts an excellent, extensive and immersive mini-game  one could have assume that CD Projekt RED would use it as inspiration. Meanwhile, the game recycles the mentioned Breach Protocol for hacking security systems, and as I've stated: looking for the optimal string of characters is ok, but it's not the same league as the system conceived by Eidos Montreal. There's actually not much to compare here. 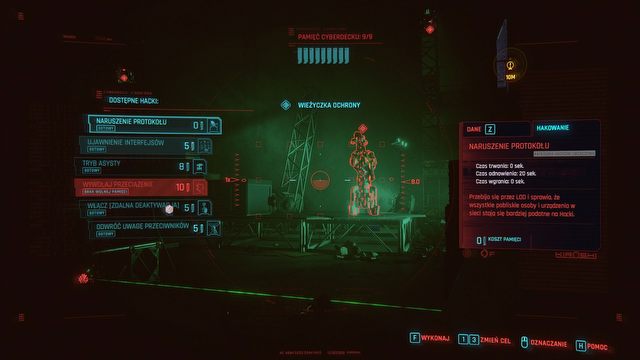 Okay, let's let Cyberpunk shine  just a little bit. From the beginning it was clear that the default method of solving problems in Night City would be to stuff the perpetrators of these problems with lead. CD Projekt RED made an effort to make us feel as if we were playing a full-blown FPS. And as far as the visual side of things is concerned, we can't complain. The animations of reloading and gun handling in general deserve genuine praise. Even Borderlands 3 didn't make me equip weapons just out of curiosity. The recoil also feels really good.

Unfortunately, things look paler when we consider all the elements of gunplay. First of all, enemies are pretty tough on levels of difficulty above normal  unless you have a powerful, legendary gun, most of them feel like terrible sponges for bullets. Five headshots is often not enough. Secondly, fighting idiots isn't fun. The AI was clearly one of the biggest problems the team encountered in development, and, unfortunately, it can't be called anything else but mediocre. Enemies often ignore grenades we toss, get stuck in the environment, or react with a huge delay. 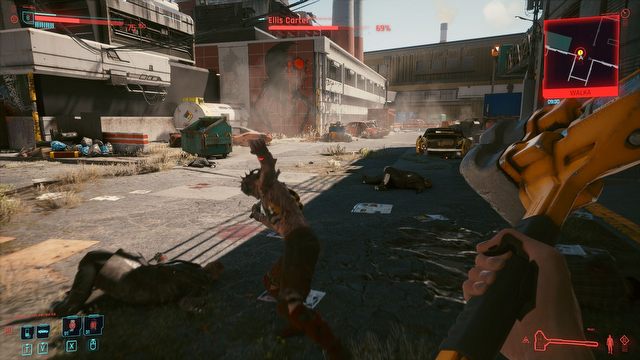 There's a ton that CDPR could take from Dying Light  including melee combat.

Fortunately for Cyberpunk, first-person shooting isn't very popular in RPGs, and there's no point comparing it to Wolfenstein, right? Thanks to this, CD Projekt RED doesn't really have to be ashamed of anything in terms of shooting. On the other hand, there's also nothing to particularly boast about when we look at specificities. Deus Ex: Mankind Divided and Fallout 4 both handled shooting rather correctly. On top of that, both these games are more efficient at modifying and/or upgrading guns (especially Deus Ex, equipped with immersion weapon management menu similar to Crysis). And there are fewer bullet sponges.

Shooting in Cyberpunk 2077 is something I had a huge problem with initially. If enemies are too tough, which they seem to be in the game, shooting doesn't feel dynamic at all. It gets better with time, as our character gets better weapons and gains better skills. Suddenly it turns out that it is possible to jump right in the middle of a gang assembly on the street and finish each of them with a single shotgun round. A sniper rifle becomes able to rip the enemy's head off. But then level-scaling kicks in, and we encounter a mob that seems quite ordinary, but since they have skull icons next to their names, our attacks are ineffective. We pour three full clips into a single enemy and realize there's no point even trying.