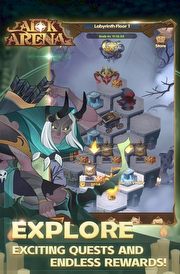 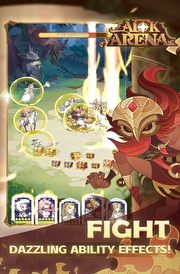 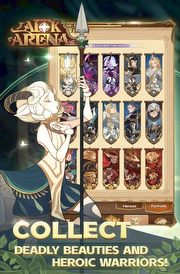 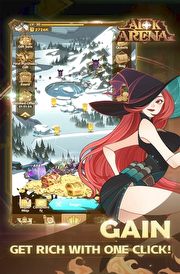 AFK Arena is a free RPG with strateg game elements, belonging to the idle sub-genre. The game enables the players to gather a team of adventurers, explore dungeons or challenge other daredevils. We will also find some solutions characteristic for card games. The title is set in a colorful fantasy world inspired by Celtic mythology. Lilith Games (also known from Rise of Kingdoms: Lost Crusade, Art of Conquest: Dark Horizon or Soul Hunters) is responsible for the development and publication of the game.

Esperia was invaded by an army of demons. Heroes from all over the world gather to face the invasion of evil.

In AFK Arena, the player's task is to fight against increasingly dangerous opponents, controlled by a human or AI. The fun begins with the choice of a character and the decisions made at this stage are crucial. The player can take advantage of a number of bonuses related to factions and individual heroes.

The list of available characters is limited - to unlock new ones we need to get their cards. We do it gradually, completing subsequent levels of the labyrinth. In the same way, we also find better and better equipment. As the game progresses, the abilities of the individual heroes also develop. Between the missions, we also visit the city, where we can call on new characters and discover the history of the world.

It is worth noting, that our contribution to the game is not too big - the game even has an idle mode, which means that heroes can fight independetly.

AFK Arena can be played both solo or with others. The title offers a single-player mode, but the devs prepared also a multiplayer module, in which we can either challenge other players or cooperate with them.

The game was released in a free-to-play model with microtransactions - we can find a shop where we can buy various types of assistance.