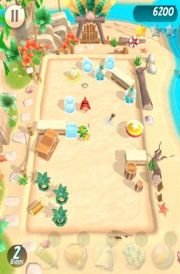 Angry Birds Action! is an action puzzle game released on AND and iOS and developed by Rovio. The game uses free-to-play distribution model with microtransactions.

The game is based on the movie released in June 2016. The main protagonist is a bird named Red (his name comes from the color of his feathers) who wakes up with a strong hangover after a party. He discovers that during the night someone destroyed the whole village. All evidence points to Red. His task is to prove his innocence. In order to do it, he will have to cause some destruction. Luckily, he is a master of that.

Instead of creating another default installment of the series, the developers decided to try a new direction. Angry Birds Action! released on AND and iOS offers some completely new features, never seen before in the series. In general, the game can be described as a combination of elements known from previous games in the series with a pinball. On each level the player is tasked with leading the protagonist to eggs and thus saving them. Controlling the character is similar as in previous games, but the action takes place on the ground. The player uses his finger to set the direction and strength, and then Red is shot and he slings through the ground until he reaches his target.

There is a limited number of moves in each challenge. Usually the number is too small for the player to be able to collect each egg separately. Instead of that, the player must learn how to ricochet the bird from the surroundings. Useful bonuses can be collected in the game, including additional shots. Variety of objects that can be found on the levels keeps the game interesting and fresh. Some objects can be destroyed, other increase of speed and strength of the bird that hits them. At first, the player can control Red who specializes in demolition, but then other characters with unique abilities are unlocked. In addition to that, for successes the player receives currency that can be used for rebuilding the village and thus obtaining various useful gifts and upgrades. All of that combined creates interesting mechanics and adds some freshness to the strongly exploited series.