Deponia Doomsday for PC, XONE and PS4 is the fourth instalment of the humorous adventure games by Daedalic Entertainment studio from Germany. The third part of the game, symbolically called Goodbye Deponia, was meant to be the last in the series, but, pressed by fans, the developer decided to continue the story.

Deponia Doomsday tells the story of Rufus  the protagonist from the previous parts of the game. In the introduction he experiences a ghastly vision in which the floating city Elysium and his planet Deponia are destroyed. Then he sees his homeland taken over by savage creatures called Fewlocks. Apparently remaining the last living human, he decides to destroy the planet. After awakening from this nightmare, Rufus is determined to go to great lengths to prevent the disaster from happening. To do this, he asks professor McChronicle for help and uses his time machine to set out on a ludicrous journey in time and space. Continuing the series tradition, the plot in Deponia Doomsday is twisted and full of humour. During the game you will meet old friends from the previous parts, including Rufuss beloved Goal, Lonzo, Lotti, and Wenzel, plus more than 70 new characters. Deponia Doomsday is big and long  it offers about 20 hours of adventure and more than 100 hand-drawn levels.

Mechanically, Deponia Doomsday uses the series well-proven formula. It is a point-and-click adventure game with the emphasis on talking with NPCs, world-exploration, and solving logic puzzles. From time to time you will be engaged in occasional events, like drag racing. The game offers single player only.

Similarly to the previous parts of the series, the visuals of Deponia Doomsday for PC, XONE and PS4 are created in a cartoon, two-dimensional style that fits the humorous atmosphere of the title and at the same time is very easy on the eye.

Deponia Doomsday game guide contains lot of tips useful during this crazy adventure which is a fourth part of game series by Daedalic Entertainment. 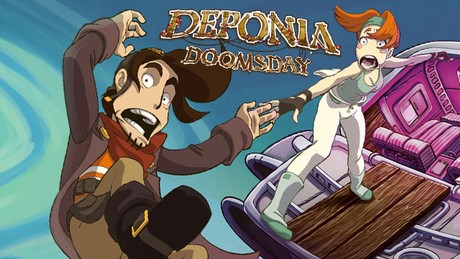 Deponia  a beloved series of adventure games that came back quite unexpectedly. In our review of the fourth installment entitled Doomsday we answer the question whether Rufus & Co's return is as good as previous games.

Deponia Doomsday was just announced as the fourth installment in the Deponia adventure game series. Daedalic Entertainments new project will first hit PC on March 1, 2016 with PlayStation 4 and Xbox One versions to follow.