Published on PC, Driftland: The Magic Revival is a fantasy game that combines elements of a real-time strategy, a life simulator, and a classic 4X strategy. The game was developed by Star Drifters  a Polish studio established by Michal Sokolski and Krzysztof Jakubowski, co-founders of City Interactive (later called CI Games). They are responsible for such games as Alien Rage and the Sniper: Ghost Warrior series.

The action takes place on the titular planet named Driftland which, due to an old war fought between mages of four races, has literally fallen apart. In the face of doom, the once disputing parties are forced to form a pact under which they used their remaining magic to cast a powerful spell that keeps the world from total disintegration. The war, however, had a devastating effect on the planets living conditions and its inhabitants turned into barbaric tribes. After a few centuries of progressive degeneration there shined a spark of hope in the form of regenerating magic which enables the worlds merger. Along with the magic, the old conflict also resurfaced. You assume the role of a mage who is a new ruler of one of the races. Your objective is to grab the chance of reviving the balance in Driftland and making it your own kingdom.

Mechanics in Driftland: The Magic Revival combine elements of a few genres, like real-time strategies and 4X strategies concentrating on expansion, exploration, exploitation, and extermination. Economy is based on resources and magic, but in contrast to the mentioned game genres, the authors dropped the time-consuming micromanagement and put an emphasis on strategic decisions along with setting and meeting objectives.

The players main mission concerns taking care of kingdom and its development. The key aspect of gameplay is exploration of a procedurally-generated world and gradual merging of particular islands in order to extend your sphere of influence. The strategic and tactic parts take place on the same map, and during combat you are in control of squads composed of a number of different units, like those capable of taming and mounting flying animals. However, during gameplay you cannot directly influence your subjects actions  any interference in the world consists in giving orders and formulating new objectives for your subjects. Magic comes in handy in this particular aspect  you can move fragments of the planet and even change its biomes.

Driftland: The Magic Revival for PC utilises powerful Unreal Engine 4 (which is rarely used in RTS games), so visuals are very impressive. At the same time mechanics follow the rule: easy to learn, hard to master  the game will cater for the tastes of both strategy games amateurs and veterans. 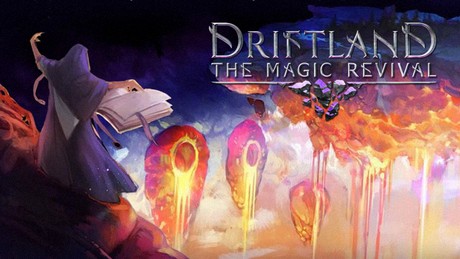 Driftland: The Magic Revival Hands-on  a fantastic blend of Heroes and Majesty

Polish gamedev veterans united under the banner of Star Drifters are devising a most interesting strategy game, which is visibly inspired by Heroes of Might and Magic and... Majesty.