Homeworld: Deserts of Kharak for PC is a science-fiction real-time strategy game. This is the debut of Blackbird Interactive - a studio founded by Relic's former employees, among whom were many people who had worked on the production of previous installments in the Homeworld series.

In terms of the plot, the game is a prequel to the previous installments, with its action beginning 106 years before the events from the original Homeworld. The game is set on the surface of the titular Kharak planet, which is home to the exiled Kushan people. The planet is dying, for most of its surface has already changed into sun-scorched deserts. This caused a permanent war involving all the clans inhabiting Kharak, because everyone wishes to obtain the resources left for themselves. However, the clans are also divided because of their ideologies. One of the most important factions involved in the conflict is a group of religious fanatics claiming that developing a technology allowing for space exploration means breaking the laws of the divine.

The situation on the planet changes dramatically when a satellite discovers a mysterious object buried under the sands of Kharak's largest desert. Soon, the coalition of northern clans organizes an expedition, though it goes missing. The campaign tells a story of the second expedition led by officer Rachel S'jet.

Homeworld: Deserts of Kharak for PC is a typical representative of the RTS genre. Thus the player gathers resources, develops technologies, creates units and battles in real time. An important part is played by artifacts found in shipwrecks of unknown origin. Those give access to different, useful bonuses.

Contrary to the previous installments, the game is set on the surface of a planet, rather than in space. Despite that, the gameplay mechanics implemented resemble what both Homeworld and Homeworld 2 had to offer. For instance, instead of having a stationary base, the player uses a huge land cruiser called Kapsi - when it gets destroyed, the player loses. Kapsi is heavily armored however, and has great firepower, though it is relatively sluggish. Resources are transported inside the cruiser and other units are created aboard. Kapsi is made of four components powered by energy points available. With each subsequent mission, the power reserves grow, but the player has to manage them carefully - when exploitation gets too intense, it can result in systems overheating.

The course of a battle is highly dependant on the landform here. All the maps are filled with mountains, hills and pans. Climbing higher gives a substantial advantage over the enemy, because the range of weaponry increases for example. Each unit has at least one active or passive ability and using those effectively makes it much easier to achieve victory. Furthermore, the player's military forces gain experience during subsequent missions, which increases their potential in combat.

Homeworld: Deserts of Kharak for PC prolongs the tradition of the franchise, offering an extensive single-player campaign with an ample plot and a set of diverse missions. However, a multiplayer mode is also available, allowing two players to compete against one another. In online skirmishes, victory is achieved by destroying the enemy's cruiser or being first to obtain five artifacts.

Earth 2150: Escape from the Blue Planet

The Homeworld: Deserts of Kharak guide contains detailed info on the game's singleplayer and multiplayer modes. It offers a complete walkthrough, as well as strategies, units descriptions and technology trees. 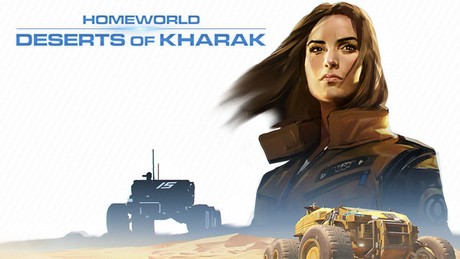 Homeworld: Deserts of Kharak review  a galaxys worth of sand

Real-time strategy games, as a genre, are dying. Thats why every new RTS premiere I see is a reason to celebrate. All the more so if the game belongs to one of my favorite series.

Homeworld is getting a prequel; Homeworld: Deserts of Kharak to launch in January

Homeworld: Deserts of Kharak is a prequel to Homeworld and Homeworld 2 slated for release on January 20th, 2016. This is going to be a ground-based RTS with single player campaign and online multiplayer.

It seems that Gearbox Software is preparing to announce a new installment of the Homeworld series, which will be created by the devs of Homeworld: Deserts of Kharak, i.e. Blackbird Interactive studio. The opportunity is perfect, because in September it will be twenty years since the premiere of the first installment of the cycle.