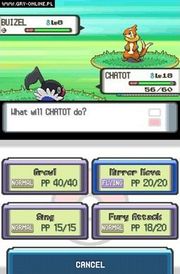 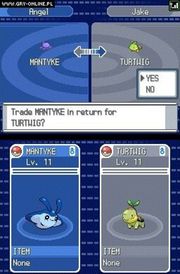 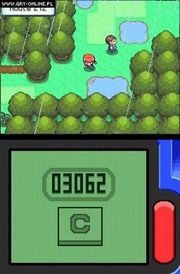 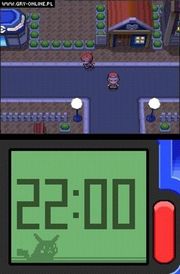 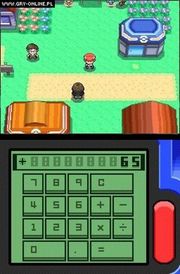 Pokémon Diamond and Pokémon Pearl, exclusively on Nintendo DS, prove that the next generation of Pokémon games is taking the hugely popular franchise to amazing new levels.

Pokémon Diamond and Pokémon Pearl take place in an all-new region called Sinnoh. When you set off on your travels, you'll be able to play as either a boy or girl Trainer. Pokémon fans have caught glimpses of Mime Jr., Lucario, Munchlax and Weavile in Pokémon movies, and these Pokémon will be debuting in this adventure.

Pokémon Diamond and Pokémon Pearl will challenge you to explore the Sinnoh region in an incredibly deep RPG adventure. Before your quest is complete, you'll meet over 100 new Pokémon and challenge countless Trainers along the way. Like previous core Pokémon titles, these games feature an engrossing storyline and well-balanced RPG action.

Pokémon Diamond and Pokémon Pearl continue a Pokémon RPG tradition by having you make one of the most important decisions in the game right away: Picking a Pokémon with which to begin your journey.

Three all-new Pokémon are yours to choose from  Fire-type Chimchar, Water-type Piplup, and Grass-type Turtwig. You won't be able to catch these Pokémon in the wild. To catch every Pokémon, you'll have to trade with other Trainers to get the two Pokémon you didn't select.

The Pokémon you choose can have a big impact on your adventure in several ways, so choose wisely. To see the three new starters, click Art Gallery in the menu on the left.

Compatible wireless router or Nintendo Wi-Fi USB Connector and broadband access may be required for online play. For more info, go to NintendoWiFi.com.

Visit the basement level of any Pokémon Center to enter the Pokémon Wi-Fi Club. Once you have connected to the Nintendo Wi-Fi Connection, you'll see a list of available friends. You can then use the voice chat feature, share records, or invite a friend for a battle or a trade.

Those who attain the rank of League Champion will gain access to the Battle Tower. The Battle Tower has a Wi-Fi Room where you can go online and battle against the teams that other users have registered (but which are now controlled by the computer). If you participate, people around the world will be given the chance to battle your team of Champions!

Visit the Global Trade Station to trade Pokémon over the Wi-Fi network with people from all over the world. Post a Pokémon that you're willing to trade or search through the list of Pokémon offered by other Trainers. You may end up with a Pokémon from another country!

Once you connect with friends over Nintendo Wi-Fi Connection, you'll be able to use the Nintendo DS microphone to speak to them directly! You may also use the voice chat during trades and battles if the host of the session enables that option.

The DS's touch screen has improved on the Pokémon gameplay systems in a number of ways. When you're choosing an attack, touch-screen buttons display standard information  the move name, the move type, and how many PP you have left. The item-select screen is broken down into categories, and all of the items are clearly organized within each section.

The changes don't amount to actual differences in how battles play out, but they will help you to manage your items and moves better than before. If you prefer to use the Control Pad and buttons to select your next move, you can do that as well.

Outside of battle, the touch screen plays other big roles. While you're out exploring the far reaches of Sinnoh, the lower screen accesses your Pokémon Watch, known as the Pokétch. You can also use the stylus to interact with the Pokédex. The list of Pokémon appears on the top screen, and you can spin a wheel that looks like a giant Poké Ball to browse the Pokédex list. These are just a couple of the roles the touch screen serves. You'll discover many more as you play the game.

When Pokémon Gold and Silver introduced a real-time clock, Pokémon fans absolutely loved it. It seemed destined to become a staple of Pokémon games, but when Ruby and Sapphire came around, the feature disappeared. Pokémon Diamond and Pokémon Pearl reintroduce this system in a major way.

A 24-hour cycle is divided into five phases: morning, day, evening, night and late night. Certain Pokémon are most likely to appear during particular phases of the day. A Pokémon's area info in the Pokédex depicts a sun on the bottom screen. If you drag it across the sky-like timeline, you'll be able to see where the Pokémon will appear and at what times.

Legendary Pokémon like Lugia, Ho-oh, Groudon, Kyogre, Suicune, Raikou and Entei have always been sought after by Pokémon Trainers. These mysterious creatures are one-of-a-kind, and very powerful.

In the DS version, the Legendaries are larger than life  Dialga is an enormous blue Pokémon that is said to be able to manipulate time, while the giant purple Palkia is said to have the power to distort space. Not much else is known about these Pokémon, except that they can only be caught in their respective games. To see Dialga and Palkia, click Art Gallery in the menu on the left.

When you're out exploring the many corners of Sinnoh, the lower screen accesses your Pokétch, a multifunctional tool that Trainers will find indispensable. The Pokétch is basically a small computer that stores a variety of miniature applications.

When you start out, the Pokétch is limited to a handful of uses  it's a watch, a pedometer, a Pokémon-status checker, and a calculator. As you progress through the game, you'll find more applications, including a note pad and an item finder. There are 20 applications to discover, and you'll have to put in some serious footwork to find them all.

Gender has long been a part of the Pokémon series, but until now male and female Pokémon have looked the same. Pokémon Diamond and Pokémon Pearl introduce visual differences for Pokémon depending on their gender. For example, a male Wooper will have more horns than a female. Even the most well-known Pokémon, such as Pikachu, are getting a graphical update.

There are still some Pokémon that look the same in both genders, some that can only be male or female, and some (particularly the Legendaries) that don't have a gender at all.

For the most part, whether you play one game or the other, the gameplay will be the same. But there are several differences between the two versions. Most importantly, there are a handful of Pokémon that are version-exclusive. For example, if you're looking to complete your Pokédex in Pokémon Diamond, you'll have to trade your Pokémon with a Pokémon Pearl game.

The full list of version-exclusive Pokémon hasn't yet been announced, but Palkia and Dialga are two examples. Other Pokémon may be rare in one version of the game, such as Mime Jr. and Bonsly.

Whether you're new to the world of Pokémon, a Pokémon fanatic or maybe someone who hasn't played a Pokémon game in a while, Pokémon Diamond and Pearl are guaranteed to get you hooked.