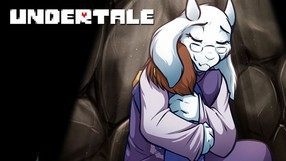 An old-school RPG from the independent developer Toby Fox, referencing the Earthbound series. Undertale's story takes place in a world that was witness to a lengthy, cruel war between humans and monsters after a long period of coexistence between both races. It ended with humans driving the monsters underground. Many years later, somewhere in the vicinity of the now-legendary mount Ebott, a little girl looking for shelter from the rain finds a cave and in it a mysterious hole, through which she falls. We play as this girl and explore the underground world, facing various monsters and interacting with various characters. The games most characteristic feature is the innovative battle system  we can engage in direct combat in the form of arcade minigames or avoid more difficult fights through talking and complimenting.