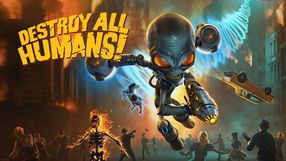 The next installment of the very popular series. This time the main attraction is the title Big Willy robots, over which you can exercise total control. The player once again controls the character Crypto.

He is nasty, has a large saucer, comes from space and makes us say: IMPORTANT! Who is it? Crypto! Haven't you heard? Without fear, you will certainly hear many times! This ghastly alien liked our Earth. She says she will find her lost DNA on it. Who knows him there. But beware of him!