While under THQ, Destroy All Humans! franchise spawned four games – the first two, developed by Pandemic Studios, were pretty good. When the company went bankrupt the IP was bought by Nordic Games, among other titles, but since then we haven’t heard much about the future of the series. Over the weekend a fan asked Nordic Games about the franchise on Twitter, to which they answered: 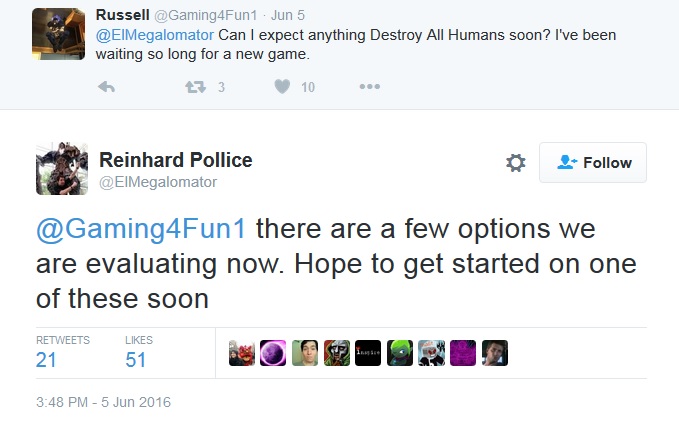 Nordic is seriously thinking about the future of the Destroy All Humans! franchise.

No elaboration was given on what those options are. Escapist noted that Nordic may simply re-release the original games digitally, remaster them, or create a brand new title. Obviously, we hope the latter is the case.

The original Destroy All Humans!, released in 2005 for PlayStation 2 and Xbox, is a humorous action-adventure game about a vicious alien who spreads havoc and mayhem on Earth. One of the game’s biggest assets was the fact that it smartly parodied lifestyle, pop culture, and politics of the 1950s’ United States. In 2006, a sequel by Pandemic was released, and later two more games were developed by Sandblast. These, however, weren’t so successful.

No Gothic sequel any time soon as Piranha don’t want to disappoint the fans. Any chance for a remake of the first game?