Kotaku published a description of a secret mission from Assassin's Creed: Valhalla, which is an interesting reference to Hideo Kojima's latest work - Death Stranding. As it usually happens with easter eggs, the task has been carefully hidden by developers, so players may have a big problem with finding it. However, it seems that for fans of Sam Porter Bridges' adventure (but not only them) the game is worth playing.

To get access to the mission, we need to take over the old settlement and unlock the trading outpost to sell and purchase items. As it turns out, a list of goods and four cargos were placed right behind it, which, as we can find out from Yanla, the owner of the shop, were not picked up by the customers. At this point, Eivor can take on the role of courier, whose job is to deliver the right items to their rightful owners. And so the stone slab must b taken to a farm,a jar of rosewater mead - to the hermit's hut, a crate of bowls - to the jeweller, and an anvil - to the blacksmith. 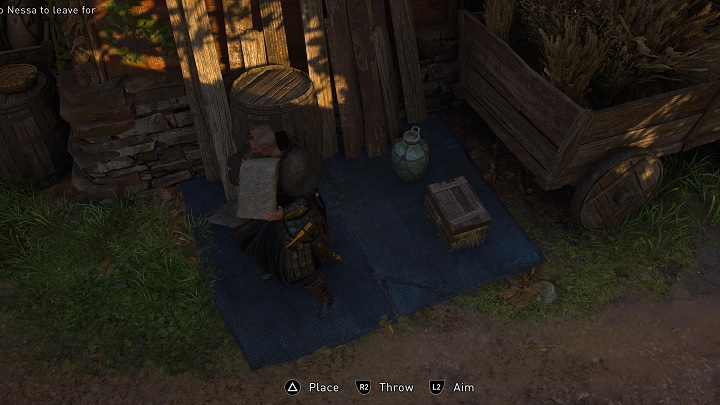 A place where the items not collected by customers are hidden (source: Kotaku).

Sounds not very complicated, right? The problem is that the loads in question are heavy, which makes carrying them (in hands, as Eivor does not have such a hand backpack like Sam did) makes it impossible, for example, to ride on a mount or climb cliffs, and makes even such mundane activities as crossing a river much more complicated. Thus, the mission not only draws on Death Stranding in terms of goals, but also forces them to carefully study his surroundings and choose the optimal path that will lead him to the goal; just like in Hideo Kojima's game. 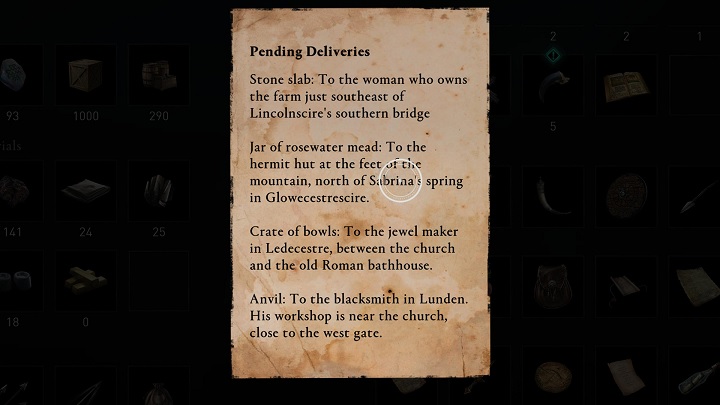 A list of items and instructions on where to take them (picture source: Kotaku).

The task is therefore not easy, but at the moment when these words are written, there is no way of finding out what reward awaits us for completing the job. The editor of Kotaku came across a bug, so in his case the mission ended in failure. By the way, the reason for this was most probably the fact that he first delivered all the items and only then talked to Yanli about the mission. So you better not try that at home if you want to complete this task.

Finally, we remind that Assassin's Creed: Valhalla is already available on PC, PlayStation 4, Xbox One, Xbox Series X and PlayStation 5.

PlayStation 5 in Black; Fans Paint the Consoles on Their Own

Microsoft: Bethesda Games  First or Best on Xbox and Windows 10