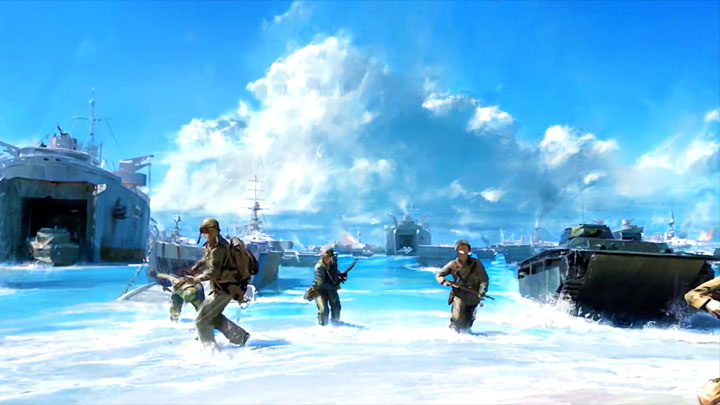 The first trailer will be released tomorrow.

Tomorrow, DICE will reveal War in the Pacific, another chapter in the development of Battlefield V. For now, a 14-second teaser has been released to whet our appetite.

A full trailer will be shown on October 23, at 6 AM PDT. Then we will also learn the first official details about the update.

Fans speculate that the teaser is probably showing the Battle of Iwo Jima. A map of the island and its surrounding waters first appeared in Battlefield 1942, where it was used for battles in Conquest mode. The level was also available in Battlefield 1943.

Let us remind that according to the schedule, War in the Pacific will launch this autumn. In addition to Iwo Jima, we are to receive two additional maps. There will be seven new weapons and gadgets as well as boats.

Battlefield V was released in November last year. The game launched on PC, Xbox One and PlayStation 4. The game was received quite warmly. According to Metacritic, the PC version has an average rating of 81%. In the case of XONE it is 78%, and the least successful edition is PS4, which can boast only 73%.

By February, 7.3 million copies of the game had been sold. This result, although impressive in itself, was lower than the publisher's forecasts (by a million copies). In March an update with the battle royale mode called Firestorm was released, which sparked interest in the game. We wonder if War on the Pacific will have a similar effect on the popularity of Battlefield V.