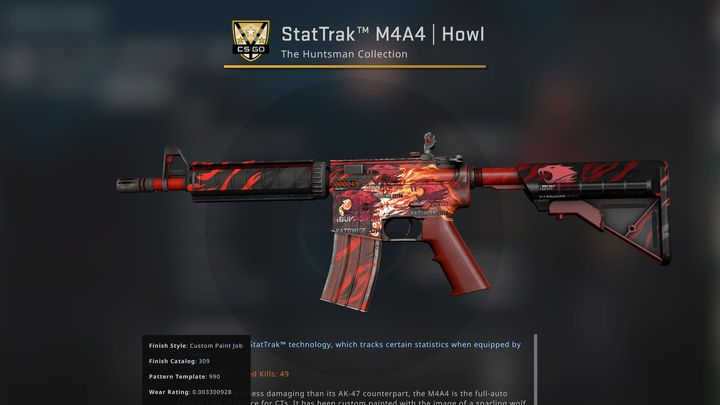 Well versed in Counter-Strike: Global Offensive economy, Twitter user ohnePixel reported in an entry that a very rare StatTrak M4A4 (Howl) skin was recently purchased for an astronomical price of $100,000. The digital item was to be purchased by a Chinese collector.

Interestingly, the buyer is ready to sell the skin for even more - for 130 thousand dollars. However, even the amount of 100 thousand dollars is more than enough to set a record. So far the most expensive cosmetic item sold in CS:GO was the Souvenir AWP (Dragon Lore) skin, worth over 61 thousand dollars.

Interestingly, one of the reasons why the StatTrak M4A4 (Howl) skin is so expensive is... the iBUYPOWER Katowice 2014 sticker, which dates back to the times when CS:GO's fanbase was much smaller. Items like this are among the rarest we can get. For comparison, the price of a normal StatTrak M4A4 (Howl) skin - without these stickers - is 5180 dollars. The second factor influencing the price is the chaotic and crazy nature of the Chinese collector market.

EA or Microsoft May Buy WB Games, Publisher of LEGO and Batman Arkham