There are many indications that CD Projekt RED will release patch 1.5 for Cyberpunk 2077 in the near future. At the same time, the studio is expected to release an upgrade for next-gen consoles. This is to be the biggest update to date - its debut will be treated almost like a second release of the project.

Speculations started when the trustworthy Twitter account PlayStation Game Size shared new artwork from CP2077 with the PS5 annotation. It is supposed to replace the so-called key art, which is a key graphic for the game that is displayed in digital distribution stores, for example. The change of this element suggests a strong refresh of the game and harmonizes with earlier reports about the scale of changes offered by update 1.5.

Such conclusions were drawn by, among others, Tyler McVicker (formerly active as Valve News Network). Youtuber is one of the best sources of information about Cyberpunk 2077 and he draws his knowledge from both file analysis and sources among current and former CD Projekt RED employees. 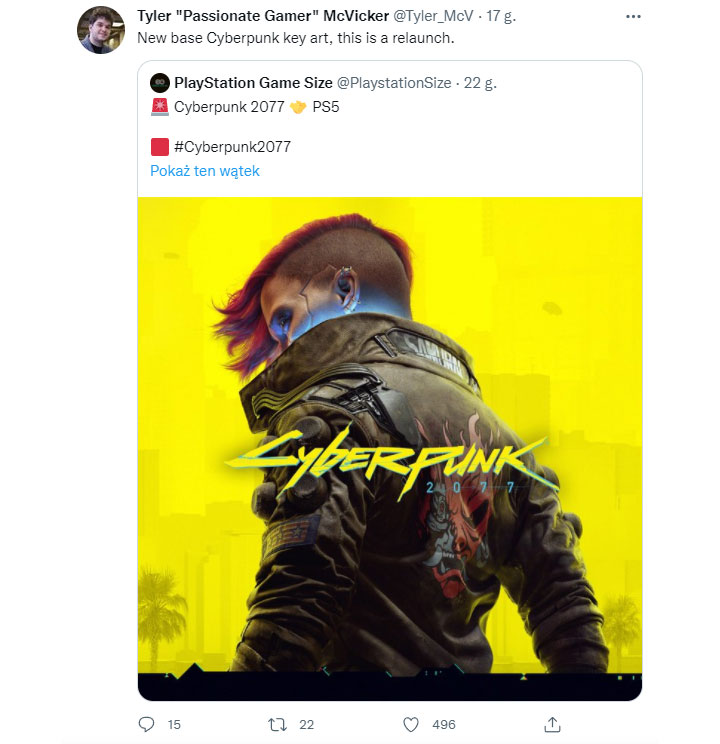 The source of the additional leaks is the Gaming Updates and Countdowns account. This information should be approached with caution, as this profile has not always shared reliable content. The latest rumors suggest that patch 1.5 will debut next month and will offer, among other things:

It is worth mentioning that most of the new features listed by Gaming Updates and Countdowns have been known for a long time, as inquisitive fans found them in the game's files. However, it's hard to say whether all of these elements will appear in patch 1.5. For example, there are many indications that Pacifica will be the location of the first expansion, so it would be a nice surprise if it was already unlocked in the patch.

The same source shared some interesting speculation about the next-gen upgrade for CP2077. According to Gaming Updates and Countdowns, after its installation, the PlayStation 5 and Xbox Series X/S versions will offer three graphic modes:

The ray tracing mode is supposed to look better on the Xbox Series X than on the PlayStation 5.

God of War is PlayStation Studios' Biggest Success on PC