The SuperData analytics group published a summary of the digital distribution market in December. This data includes not only the sales of games themselves, but also the revenues from microtransactions. They show that last month the total revenue from this branch of the industry amounted to $12 billion, which is a historic record. Much credit for all this goes to games such as Cyberpunk 2077 and GTA Online.

The biggest increases were recorded in the PC segment. Compared to the same period last year, this section has grown by 40%. The launch of Cyberpunk 2077 largely contributed to this state of affairs. In digital stores, the game sold an estimated 10.2 million copies (returns were not deducted), thus being the best digital debut in history. Importantly, 80% of the copies sold were of the PC version.

In addition to the information on individual titles and total revenue, a list of the most popular games was published. It is presented in the graphic below. 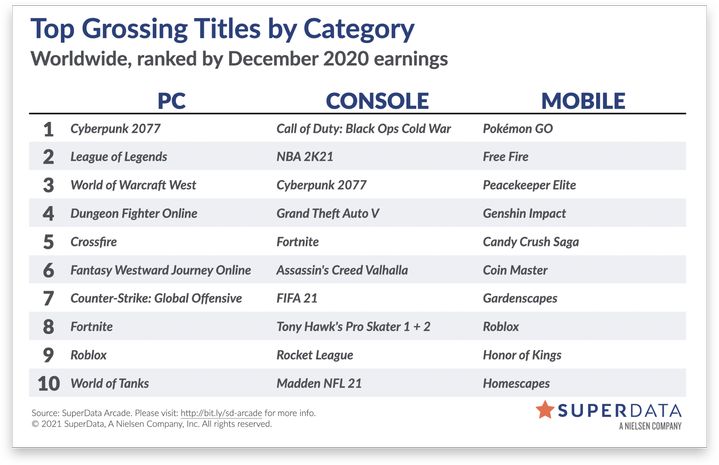 As you can see, despite the controversy over its technical condition, Cyberpunk 2077 dominated the industry market in December. Even in the console segment, where the problems proved to be the greatest, it reached a high third place.

Interestingly, Rockstar also has reasons to be happy. December's update for GTA Online - Cayo Perico Heist- despite the complaints of some players, turned out to be a huge success. Thanks to it, the game recorded the highest ever revenues from microtransactions, and the number of players increased by 46% compared to November.

Mobile Game Has Graphics Settings Unlike the PC Version