Announced last May, Sherlock Holmes: Chapter One is slowly starting to come out of the shadows. The editors of SegmentNext took the devs at Frogwares, responsible for the project, for questioning about how the game will look like. The famous detective will be given a large area to explore, dedicated mechanics to help him solve criminal puzzles, as well as the option to customize his appearance and property.

Let's start with the fact that Sherlock Holmes: Chapter One will offer open world and provide 12-15 hours of fun... and that's in case we decide to keep to the main storyline, in which our task will be to unravel the mystery of the death of protagonist's mother. In addition, the game will offer more than 30 side quests, the completion of which will extend the game time to about 40 hours. Many optional missions will not differ in length from those prepared for the main story.

As befits a Sherlock Holmes story, we will spend the lion's share of the game looking for various clues that will bring us closer to the end of the investigation. Interestingly, the collected evidence can now be "pinned" to the screen; an example is the description of a suspect (e.g. a "rough" looking left-handed person) who will help us identify such an individual in the crowd.

It's worth noting that in the game we won't experience RPG elements in the form of developing skills or character stats. However, the devs promise that as we progress, we'll still notice the transformation of a young detective into "the man he should be" (which will often be paid for by various mistakes made by the rookie investigator). Sherlock's appearance, however, can be changed by means of costumes. Moreover, over time we will unlock various decorations to his property. 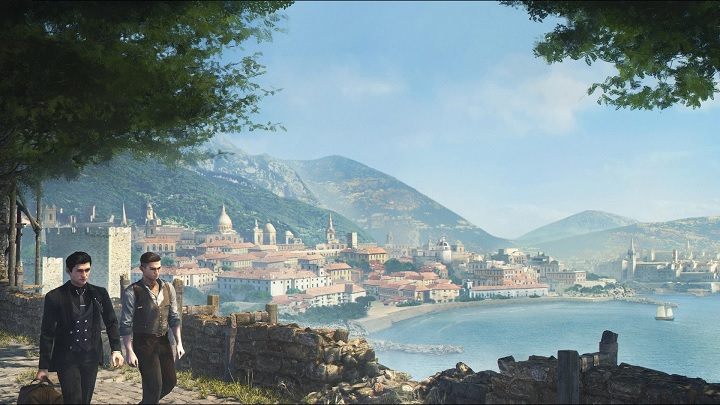 The island where we'll find ourselves in Sherlock Holmes: Chapter One may seem like a paradise, but looks can be deceiving.

It is also worth taking a loot at play time and setting. Sherlock Holmes: Chapter One will take us to a Mediterranean island, where we'll observe the beginning of the young detective's career. Although this piece of land will be fictional, it is inspired by real locations. The result is a pleasing mix containing "a bit of Mediterranean vibe", "Ottoman flavour" and a pinch of "British colonialism". At first glance, it will seem that the place is a real paradise, although we will quickly see its problems, such as the clear class division and various tragedies that the locals face.

Sherlock Holmes: Chapter One is slated for launch on PC and consoles (eighth and ninth generation) in 2021. At the time of writing this news, it's not yet clear whether the title will take advantage of PS5's DualSense features, but the devs praise it very much, calling it 'fantastic'. Another thing is that the project may start a kind of a sub-series, in which we will learn more about Sherlock's future past adventures. It can be assumed that whether we will ever see Sherlock Holmes: Chapter Two will depend on the sales results of the first chapter.

Biomutant Will Launch Before April

Hitman 3 in VR on Gameplay Trailer