Devil May Cry 5 launched with a bang, bang, bang. The latest installment of the popular hack-and-slash series telling the story of Dante a half-man, half-demon waging a spectacular (or rather smokin', sexy and stylish) war on various demonic creatures - was liked by both reviewers and players. The production is faring equally well in stores. At least that's what the data provided by Capcom suggest. The Japanese company announced that more than two million copies of Devil May Cry 5, including PC, PlayStation 4 and Xbox One versions, have been shipped to stores around the world two weeks after the launch.

Please note that this does not mean that so manycopies of the latest Capcom work have been purchased by the players. It's only about copies that have been put on store shelves. 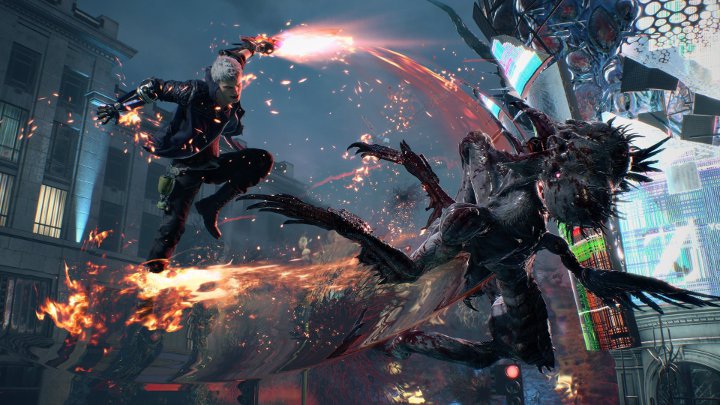 The new DMC has the right kind of edge for the gamers.

The Devil May Cry series is already eighteen years old. Thanks to the dynamic, spectacular and demanding gameplay, unique atmosphere and extremely charismatic hero it quickly gained popularity. DMC 5 is the first part of the cycle in more than 10 years to pick up the main storyline. The title enables us to play the three heroes - Dante, Nero - the protagonist of DMC 4 , and the mysterious V - who fight with guns, swords, and other things against demons in the streets of Red Grave City. In the future, other characters will also appear in the game in the form of DLC. Their creation depended on the success of the game, and the fact that it distributed two million copies can be considered as such.

Although Capcom can cosider Devil May Cry 5 a success, this does not mean that the title has avoided controversy. Last week, the PlayStation 4 version of the game received a nudity censorship patch, which, of course, met with strong criticism from some of the fans.