The developers addressed various technical issues on Diablo 2: Resurrected's community forum. Playing at ultra-wide resolutions (e.g. 2560×1080, 3440×1440) caused problems, as reported by users since alpha version. Many kinds of abuse were pointed out, resulting from the wide field of view - spells could be cast from a much greater distance, it enabled players to pick up items faster and avoid monsters. It also affected the PVP mode, in which the player using ultrawide resolution had a significant advantage over the other participants of the game. In the full version of the game the sides of the screen will be heavily darkened (vignette effect), the field of view is to be the same for all players. The footage from the alpha version perfectly shows the difference between expanding and limiting visibility during gameplay.

The decision met with a positive response, which cannot be said about the other problems. The lack of lobbies and text chat on consoles was widely discussed and criticized by the Diablo 2: Resurrected community (we wrote about it here). Blizzard has not changed its mind on this issue - we will not be able to search for servers by name or create lobbies according to our own criteria. We can still use the search engine and directly invite friends to play together. The former is to be expanded with new filters, such as bosses and zones available after completing individual chapters of the game. The PvP mode will be available from level 9. Check out the attached screenshot for details: 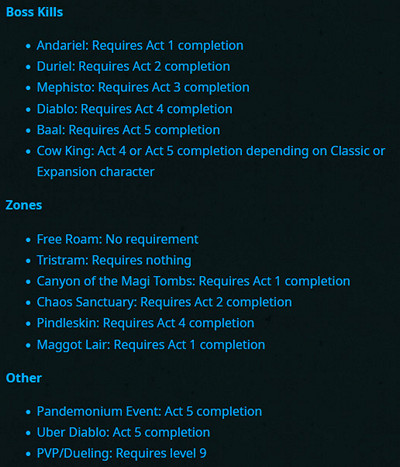 Requirements for access to particular game elements in the lobby

Chat on consoles will only be present in voice form. According to the designers this is the most convenient solution. One could argue with this, citing the statement of one of the users:

"Not everybody wants to invite 7 random players into a voice chat group."

Changes to the lobby and chat are possible, but only after the game's release.

Nothing will change in terms of TCP/IP support as an option to connect in multiplayer mode. The issue also raises a lot of controversy. Blizzard explains the lack of multiplayer support for this protocol as a security issue and assures that modders using this solution will still be able to use it... in the old version of Diablo 2.

Green Hell Devs on Next DLC and Good Sales