Oh, Elden Ring. Despite minor flaws, the latest game by FromSoftware turned out to be an absolute hit. This is evidenced by both excellent reviews as well as the sustained high interest of the community (an average of 40,000 concurrent users on Steam each day), as well as sensational sales.

Elden Ring is a bestseller of 2022

Bandai Namco - the game's publisher - reported some time ago that from February 25, the day of the game's release, to March 31, 13.4 million copies of Elden Ring have been sold. According to data from U.S. research firm NPD Group - cited today in a series of Twitter posts by its executive director, Mat Piscatella - the number of game copies sold continues to grow rapidly, thanks to which in the United States it generated more revenue (in dollars) in June than any other game.

According to Piscatelli, a similar situation has occurred in four of the five months that have (almost) elapsed since the debut of Elden Ring. This allowed NPD Group to conclude that FromSoftware's latest creation is not only the best-selling game of 2022, but also one of the ten items that generated the highest revenue in US history.

Moreover, analysts assume that this title will dominate the US market in 2022. This would be the third time in the last thirteen years that the biggest money will not be brought in by any of the installment of Call of Duty.

This is all the more interesting because the total spending of the American public related to gaming decreased in June 2022 - compared to June 2021 - by as much as 11% and amounted to $4.335 billion. In turn, comparing the financial results of the first six months of the two years under review, experts noted a decline of 10% (to $26.273 billion). 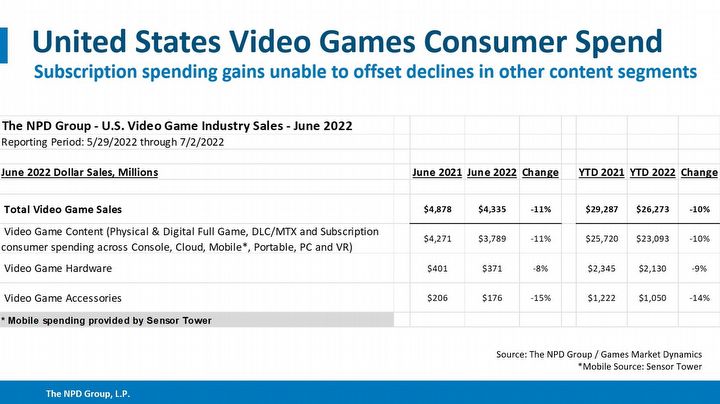 In addition, an interesting point is the increase in spending on gaming subscriptions - such as PC/Xbox Game Pass or PS Plus - while at the same time the amount of money invested in consoles declined. The sum of the latter decreased by 9% in June 2022 compared to June 2021, and amounted to $2.1 billion - almost half of the aforementioned $4.3 billion.

The highest revenue in 2022 was generated by PS5 so far - in June the console recorded double-digit growth in sales (in percentage points) compared to the same month in 2021. And in terms of the number of copies purchased by customers, the Switch dominates.

Ghost of Tsushima Close to a Beautiful Sales Milestone