Those who have even a little contact with the second-war online shooter Enlisted will know that it is divided into several modules. Each focuses on a different stage of the great 1939-1945 conflict and enables us to compete against different armies, in different environments, and with different equipment. At launch, only two such "campaigns" were available - Invasion of Normandy, in which American and German troops clash, and Battle for Moscow, focusing on the battle between the Red Army and the Wehrmacht. In recent days, the team from Darkflow Software released another campaign, titled Battle of Berlin. 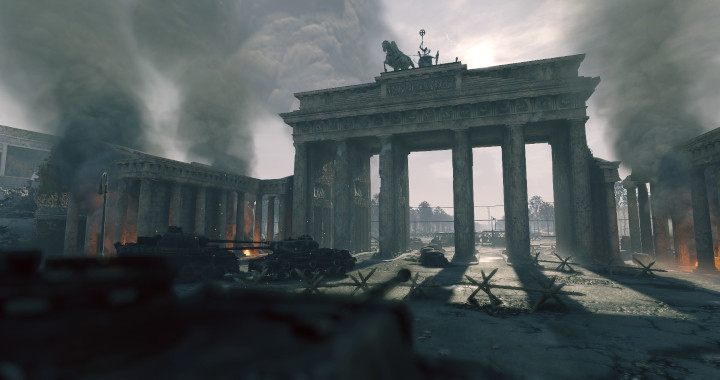 The battle for Berlin was the final note of World War II in Europe.

The freshly added campaign depicts the battle for the capital of the Third Reich between the Russians and the Germans in the spring of 1945. The players have the opportunity to fight in such famous locations as the Reichstag building, Moltkebrücke, and the Kroll Opera House. They have been given such instruments of murder as the T-34-85 tank, the IL-2-37 aircraft, the MP 3008 submachine gun, and finally the Panzerfaust 100. Many may also find the new mechanics interesting - the Mosin and Gewehr rifles have been given bayonets that work perfectly at close ranges.

If you've been waiting for the news of the new campaign's launch to jump into the game, then you need to curb your enthusiasm a bit. For now, Battle of Berlin can only be played by those who supported the project during the crowdfunding campaign in 2016, won free access last weekend or purchase a special package. Normally it costs 64.98 euros, but now you can get it with a 23% discount - for 50.03 euros. Apart from access to Battle for Berlin, it offers two special units (one for the Russians and one for the Germans), PPD-40 DSZ and MP 40/1 submachine guns, as well as 600 gold pieces.

Before you decide to buy it, take into account the fact that you cannot currently record campaign progress. This is because these are only trials to test the maps. Later, the next stage will begin, during which the developers want to test the progression balance. In it, the development will already look normal. Once everything is properly configured, the Battle of Berlin will be made available to all players.

Enlisted is available on PC, PlayStation 5 and Xbox Series X/S. The title is currently in the open beta testing phase and is distributed in a free-to-play model.