EA Sports has released a new update for FIFA 22. Title Update #2 doesn't introduce any additional content; instead, it fixes a number of issues that appear in the title. One of the biggest changes we received are changes to AI. The patch is currently available on PC and Stadia. It is not known when it will arrive on consoles.

As mentioned above, one of the most important changes are updates to AI. The effectiveness of blocking by AI-controlled players has been reduced. Until now, when trying to hinder our actions they could "stretch" too much and excessively impede our movements.

Furthermore it has been decided to make AI-controlled players more prone to commit fouls. However, this change only applies to matches played with Player Mode disabled and on difficulty level Semi-Pro or higher.

EA Sports has also decided to improve penalty kicks in FUT. After the update, the order in which they are taken will be determined by the penalty kick attribute. If two players have it, shooting power and finishing attributes will determine the order.

In addition, a number of bugs have been fixed. From now on, players should stop disappearing from the pitch during matches. Referees will no longer dictate a free-kick inside the penalty area incorrectly. A glitch that caused the automatic switching between players to malfunction has also been resolved.

If you are interested in the full list of changes that have appeared in FIFA 22 after Title Update #2, you can read about them here.

A wave of bans in FUT

Even before the release of Title Update #2, the so-called "no loss glitch" was eliminated. This bug was appearing in the console version of FUT and enabled the gamer to abandon matches without a loss being recorded. This made it easy to build up a series of wins. To avoid losing, you simply clicked on the gamepad to return to the console menu. Then you had to wait until the time to return to the game ran out. In this way, the opponent won, but we did not register a defeat.

EA also decided to take more drastic steps and put a 7-day ban on 30,000 gamers who took advantage of the bug. In this way, these people were excluded from the FUT Champions Finals taking place this week. 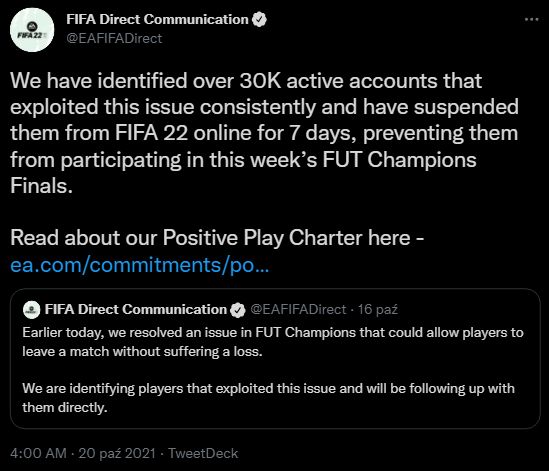