An average score of 79/100 (via Metacritic based on 19 texts) proves that Tantalus Media and Forgotten Empires have rose to the challenge. Once again, we have received the good old Age of Empires, but clearly improved compared to the original release. The changes include, of course, improved visuals (which did not raise any objections from the reviewers) and a modernized interface (with the classic UI as an alternative option).

However, the visual lifting is not everything that the definitive edition of the third game offers. The developers have also made some changes to the gameplay, including the debut of two new nations (the Swedes and the Incas) and the modes known from Age of Empires II: Definitive Edition. The whole thing was also made more historically truthful, which we find out right after the game is launched. This is when we see the information about slightly falsified depiction of Indian factions in the original version of AoE III, which was corrected in the Definitive Edition. 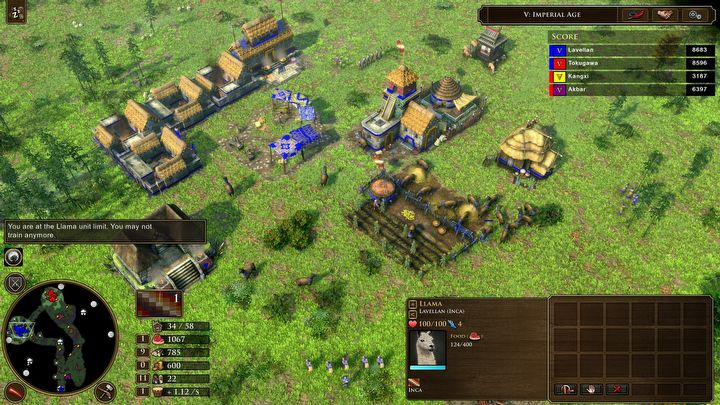 Llamas, llamas and more llamas, or the Inca civilization in a nutshell.

There are, however, several reasons why the critics stopped short of showing nines and tens in their reviews. Age of Empires III: Definitive Edition is still a classic RTS, and while this can be considered an advantage, some elements are clearly outdated. This mainly concerns AI, which has been improved, but in practice works little better than in 2005. Units sometimes have trouble finding their way to the target and are reluctant to attack enemies beyond their reach, even if we put them in offensive formation. Some reviewers have also complained about too slow gameplay, and here and we find mentions of stiff, unnatural animations of units (which are very noticeable against the background of modernized visuals). Some also admitted that although the game is not lacking significant modifications, they expected a little more.

In the final analysis, it should be concluded that Age of Empires III: Definitive Edition is another successful return of the Age of Empires series, which will keep us busy during the time remaining to the release of the fourth full-fledged installment of the series (whenever it occurs). For now we are waiting for the launch of the refreshed third installment - it will be available on PC tomorrow.