Age of Empires II: Definitive Edition is a remastered and improved edition of Age of Empires II  the second installment in the best-selling real time strategy series. Similarly to the original, released in 2000 by Microsoft, the game is available on PC. Definitive Edition has been developed by Forgotten Empires  a studio responsible for remastering the first series installment.

Age of Empires II: Definitive Edition features the content known from the original game. The story campaigns, the action of which takes place across four ages of particular civilizations development, have been enriched with new narrative elements.

In Age of Empires II: Definitive Edition, a player gets to lead one of over a dozen nations divided into four cultural circles  featuring the cultures of Middle-East, Far East, and both Western and Eastern Europe. Even though the civilizations have not been diversified in terms of their infrastructure, they can invent different technologies and erect unique Wonders of the World. Additionally, each civilization features certain advantages and disadvantages.

Gameplay mechanics are based on the framework developed for the first installment in the series, which before being implemented into the sequel, have been improved and modified. During the game, a player has to gather resources (food, wood, stone, and gold), and gradually develop his settlement by erecting new buildings and developing new technologies. In order to proceed to the following century, one has to meet specified conditions  the capstone of ones efforts is the erection of a Wonder of the World, which has to be protected over a precise period of time in order to win.

Apart from the aspect of the economy, combat is also a very important element. In order to succeed, a player has to create a large and highly diversified army  this regards infantry, cavalry, and numerous war engines  and come up with effective strategies. Should one focus only on offensive and leave his stronghold without any protection, the enemy might use this and turn the tide of the battle in his favor.

Age of Empires II: Definitive Edition revolves around story campaigns, featuring heroes such as William Wallace, Joan of Arc, Saladin, Frederick Barbarossa, or Genghis Khan. Moreover, the game offers a quick skirmish mode, in which a player has to face armies controlled by the artificial intelligence, and an elaborate multiplayer mode.

In comparison to the original release, Age of Empires II: Definitive Edition features significantly improved visuals and the game supports 4K resolution. Moreover, the developers have also modified the interface, while symphonic soundtrack accompanies the players. 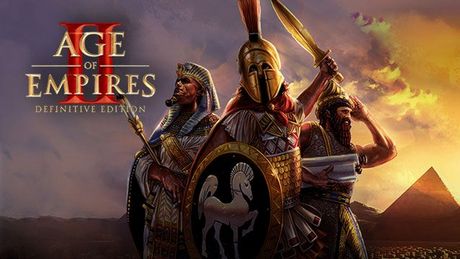 Attractive, good, mature strategy game is looking for a player! Despite the twenty years that have passed, the new Age of Empires II: Definitive Edition still manages to deliver an amazing experience.

Microsoft has announced that the upcoming Gears 5 and the refreshed first three parts of the Age of Empires series will be available for purchase on the PC via Valve's Steam platform.

Age of Empires 2 Definitive Edition On A New Trailer

During Microsoft's conference at E3 2019 we could see a new trailer for Age of Empires II: Definitive Edition. Unfortunately, the creators did not provide a specific release date, we only know that the title will be released this dall and will offer 4K resolution.

While gamers' attention was focused on E3, Microsoft announced the creation of a new studio, responsible solely for the Age of Empires series. It will be headed by Shannon Loftis.

Adam Isgreen, creative director responsible for the Age of Empires series, said in a statement for PCGamesN that more than one million people play the games from the series every month.

IGN has released a another gameplay from gamescom 2019. This time we can see a fragment of Age of Empires II: Definitive Edition. The title will debut on PC on November 14, this year.

Age of Empires 4 Without Microtransactions

Creative director of Age of Empires 4 stated that the game will not have any microtransaction system. It is possible, however, that we will get some expansions - what is interesting, also the previous installments of the series may get new content.

Across 20 years of its history, various games from the Age of Empires series have sold 25 million copies. The franchise has made a billion dollars in total. Such information can be found in the CV of Brian Sullivan, co-founder of Ensemble Studios.