The team responsible for Genshin Impact, studio miHoYo, promised to compensate fans for the longer than usual wait for the new update, and they intend to keep their word. Starting on May 11, when patch 2.7 was supposed to be released, players who had Adventure Rank 5 or higher will receive digital gifts, before 4:00 server time on that particular day. The gifts will continue every week until the update is released. We do not know how long specifically, as the exact date was not provided.

However, even if the release of the patch occurs less than seven days after the last gift is sent out, those who play Genshin Impact can still count on another pack of digital goods. What specifically? Each time it will:

What's more, Ayaka's banner duration has been extended. So the accumulated primogems can be used to unlock this heroine. 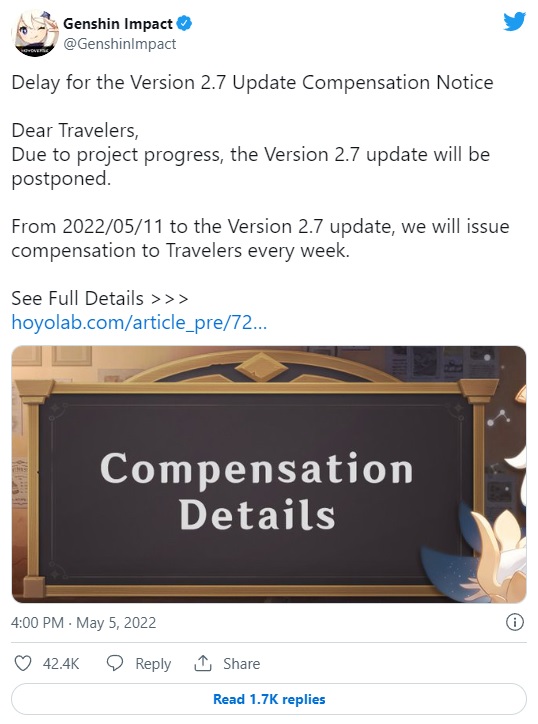 I bring bad news for fans of Genshin Impact. Studio miHoYo has announced that patch 2.7 will be released later than planned. When exactly? That we do not know yet. The developer promised to give a specific date as soon as possible. Players can also expect a small compensation for the delay and an updated game roadmap. 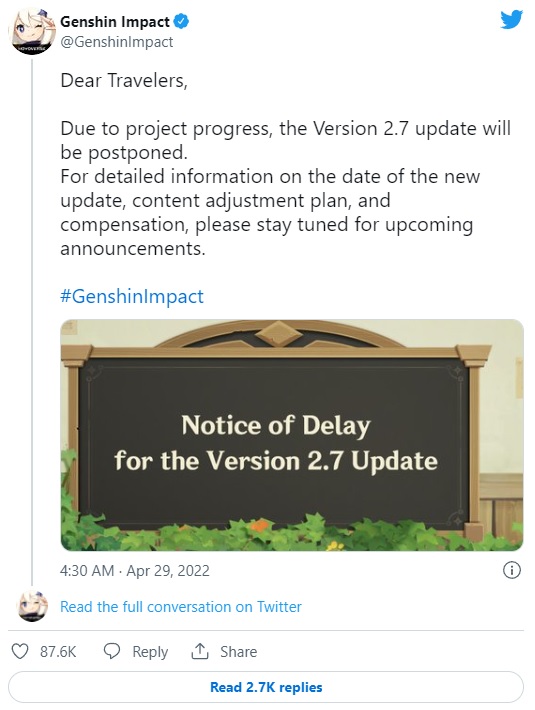 It is worth noting that this is the first such situation since the release of Genshin Impact on PC, PS4 and Android/iOS mobile devices, which took place on September 28, 2020. For nineteen months, the developer has been releasing updates at six-week intervals. So it's hard to know how it will behave at the first delay.

A new patch usually appeared right after the last available banner ended. So everything pointed to the fact that patch 2.7 will hit Genshin Impact on May 11 - the last day on which Ayaka's banner is supposed to be active.

The reason for the delay

The reason for the delay is likely to be the recent blockade of Shanghai - where miHoYo is based - caused by the resurging coronavirus pandemic.

Patch 2.7 for Genshin Impact - what do we know?

We don't know much about update 2.7 so far. As usual, spoilers can be found online - including a fragment of the trailer for the new patch - but the only certain thing seem to be playable characters that will be introduced to Genshin Impact in the delayed patch. These will be the five-star Hydro wielding archer Yelan and Kuki Shinobu - an Electro and sword-wielding four-star fighter.

Mafia 4 Could be a Prequel Powered by UE5; Hangar 13 Loses Execs