Now, however, another game has appeared on the market, which also enjoys increasing attention from the players. We are talking about HoloCure, whose popularity is so great that it has caused problems for the developers.

Another hit from the left field

HoloCure is an F2P game, which gives the impression that it suddenly and out of nowhere. We are talking about a title resembling a mix of the aforementioned Vampire Survivors and Magic Survival.

Quite an interesting twist, however, is the fact that the characters of the game are ... vtubers associated with the Japanese agency Hololive. In HoloCure we play the role of virtual content creators such as Gawr Gura (the most popular female vtuber on YouTube) .

Most of the time in the game we will spend on traversing the map, fighting successive waves of enemies, acquiring new weapons and developing special skills. There are also hidden mechanics in the game, which can be invaluable if you master them.

As you can see, this was enough to arouse the interest of a whole bunch of players. HoloCure's popularity proved to be so great that it caused some problems for the creators. As a result of the influx of players, they were forced to disable the leaderboards, because the amount of data contained in it put excessive load on the game servers.

On Twitter one of the main developers, namely Kay Yu, commented on this topic.

"We expected maybe a couple thousand people will want to play, which seemed reasonable, but we ended up with almost 50 thousand downloads in less than 24 hours and 20 GB of data downloaded from the leaderboards. That's pretty crazy, but I'm very grateful to everyone who played."

Currently, the number of downloads is likely to be significantly higher. On June 25, Kay Yu informed that the game has already been launched by 130 thousand people. 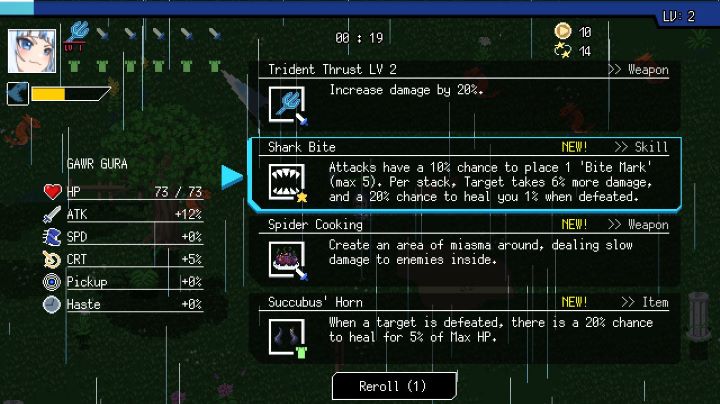 And where does such a high popularity come from? Probably influenced by the fact that many vtubers previously hosted broadcasts focused on Vampire Survivors. The new game was instead an opportunity for them to play a similar title, but with the said vtubers in the lead role.

Virtual creators quickly became interested in the game and started introducing it to their audience. The latter, in turn, eagerly followed the example of their idols.

Nothing stands in the way of you joining this group. HoloCure is free, and the creators promise further developments. With time, more characters and new mechanics will appear in the game.

So if you liked Vampire Survisorsit might be worth giving this title a chance as well.

Persona 5 Royal on PC Will Include All 45 DLCs

Persona 5 Royal on PC Will Include All 45 DLCs

ETS2 and ATS With Better Visuals Thanks to Project Next-Gen, but There's a Catch