E3 2023 to be Held in Traditional Format

The Entertainment Software Association has announced that E3 2023 will be held in a traditional format. We will get a physical event that will also be live streamed.

Along with the released gameplay trailer, Frontier Developments confirmed the release date of F1 Manager 2022. We also got to know its system requirements.

A trailer for the first season of Battlefield 2042, called Zero Hour, has appeared online. A large patch 1.0.0, which improves many aspects of the title, will be released later today.

Bloober Team has published another teaser of the third part of Layers of Fear. At the same time, Tom Henderson revealed the release date of the horror game and stated that it is to be titled Layers of Fears.

Russia's Interior Ministry has placed Dmitry Glukhovsky - creator of the Metro universe - on its list of wanted criminals.

The third faction has been added to The World of The Witcher. This time it is Aedirn. Additionally, three new city states have appeared.

How Many Camels are You Worth? Calculator Conquers TikTok

A calculator that enables us to count how many camels we could get when trying to sell our partner has recently become extremely popularOn TikTok.

Installing a game is not difficult; doing it the other way around is. In this guide you will find information on how to professionally get rid of Star Citizen from your hard drive.

10 Things You Should Know Before Playing Diablo Immortal

The world of Sanctuary is unforgiving and you need to prepare yourself well to start fighting demons and the undead in Diablo Immortal. In this text, you will find some useful tips that will help you start your adventure in Blizzard's newest game.

ETS2 Fans Have Been Waiting 5 Years for This Truck

The Semi truck from Tesla had a chance to hit the streets of ATS. However, this did not happen, and the matter was picked up by modders, independently introducing the vehicle to ETS2.

The developers at Canari Games have shared the trailer for their new game. Lunark is a title for fans of classic 90s platformers.

A new cryptocurrency has appeared on the market, under the name Fortnite Token. The coincidence with the name of Epic Games' hit is not accidental, which did not escape the attention of the company's CEO. He engaged in a verbal tussle with cryptocurrency's creators on Twitter and announced taking legal action.

Blizzard has Become a Parody of Itself

Blizzard once joked about pay-to-win, only to now bluntly pack Diablo Immortal with just such content. Gamers have unearthed one of StarCraft's commercials. 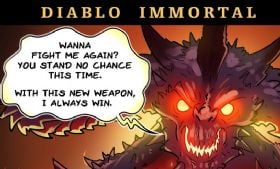 We got to know the content of special editions of The Callisto Protocol. We also learned that the game will get a season pass with story DLCs.

Renowned industry leaker Tom Henderson has revealed that The Division: Heartland is nearing completion. The anonymous source reports that the free-to-play title will receive four gameplay modes, rather than two as originally expected.

Today marks the release of another major Minecraft update. Players will get their hands on The Wild Update, which will add a highly anticipated mob to the game, among other things.

More and more offers to buy maxed out accounts in Diablo Immortal are appearing online. Meanwhile, the game's director claims that allegations aimed at microtransactions are due to misinformation.