Amplitude - the devs of the strategy game Humankind have announced that the title will not be released until August 17, this year. As in most similar situations, the reason for the delay is the desire to refine the work.

"The team will focus on improving the areas identified by the community during our previous Lucy OpenDev, where players tested 4 eras and 40 cultures to give us their feedback. (...) Well be working to address pacing, balancing, diplomacy, accessibility, and AI (among others)," reads the note.

What improvements are planned? First of all, feedback from the players indicated that the gameplay is too fast, so the devs decided to build a new system and modify the cost of researching certain technologies. There will also be changes aimed at making the gameplay more difficult (e.g. in the Neolithic era, but not only), mainly by changing the importance of food, influence and making it harder to earn money - the devs came to the conclusion that at some points the players were doing too well.

We can also expect improvements in the diplomacy system (including notifications and dialogues) and the user interface.

The release was delayed practically on the last straight, because the title was to appear on the market on April 22, this year. To compensate players for the disappointment, the devs will give those who have pre-ordered Humankind, free avatars of Lucy and Edgar Alan Poe.

A list of all planned changes and fixes can be found in the note. The developers have also shared the statistics of the Lucy OpenDev event, which are summarized in the infographic below. 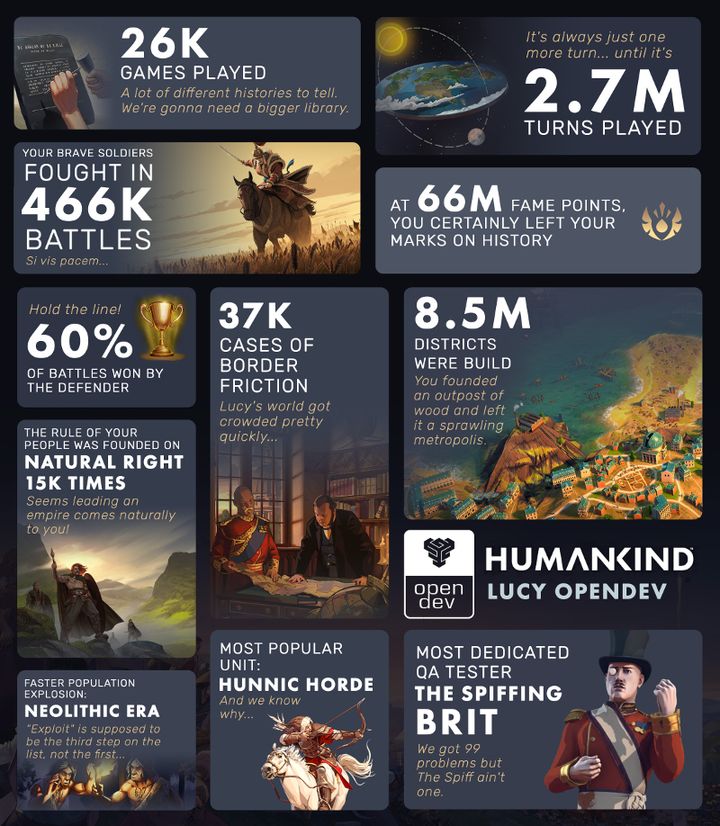 Windows 10 Will Get a Major Icon Overhaul