A few days ago Humankind celebrated its first birthday. On this occasion, the developers published a commemorative video, in which they summarized the game's development so far and announced further changes and novelties. However, the enthusiasm of the developers was not shared by many players, who believe that the direction they have taken is a dead end.

Humankind has come a long way....

In the video posted on YouTube, the developers admitted that at the time of the release Humankind faced many problems. However, the developers are proud of the fact that, with the help of the community, they were able to introduce many fixes that eliminated them.

As an example, the devs mentioned the necessary change in the area of the turn limit and the ability to edit victory conditions. One would also like to mention the revamped pollution system and adjustments in the field of warfare.

When playing Humankind it is impossible not to notice that the game has indeed come a long way. This is confirmed by the comments of some users, who admit that initially they were not fond of the game, but the subsequent changes have changed their attitude to the title.

"To be honest, I was very disappointed in Humankind at the time of its release because it was full of untapped potential, but I'm pleased with the tonof changes that have taken place since then," admits Rhys Taylor

"Great game. It has improved dramatically over the year and I abandoned Civilization 6 to play it," reports Skylighter !!!!

However, there was also no shortage of voices of players disappointed with the changes. According to some, Humankind is still plagued by many problems, and the developers are focusing on irrelevant issues.

The largest number of disappointed voices can be found on Steam. Many comments reveal that some fans do not share the enthusiasm of the developers. The reasons for this are numerous.

Most complaints relate to the still unresolved problems plaguing the game. These include bugs such as endless turns. Cultures in the game are supposed to be badly balanced, which of course spoils the fun and limits the choice, because some of them are simply not worth playing.

Players are also disappointed with the level of AI. Sometimes the artificial intelligence is simply impossible to catch up with in terms of technological development. At the same time, it is not uncommon for it to make stupid decisions, with which it nullifies even a sizable advantage.

In addition, the last era in the game, which is supposed to be much duller than the earlier stages of the game, is criticized. According to some, by the way, these bugs are impossible to fix, given their complexity and the speed at which subsequent patches are published.

"Many of the problems still exist in the game. Some cultures are objectively more powerful than others, and the "endgame" just doesn't feel like it should. I wish you the best, but I think the game can't be fixed with this rate of publishing updates," sums up Ensus

Out of duty, it is also necessary to mention complaints about the allegedly unnecessary representation. Some players are clearly bothered by the fact that the developers are releasing more DLC introducing cultures from lesser-known regions such as Africa and Latin America into the game, while they can't erect the Colosseum as a wonder.

"You have a great game, and believe me, representation is the least of your problems, well, unless you mean the lack of representation of ancient European cultures. You can't even build a Colosseum (WHY?!?!?!)," scoffs Emperor

Unlike the previous allegations, this one is hard to take seriously. After all, since its release, the game features a whole host of European cultures from different eras (it is enough to mention the Celts, Romans, Greeks, French, Germans, British, Spanish, Dutch and even Poles).

However, there is no denying that Humankind has indeed disappointed some players, and it seems impossible for the developers to regain their trust. Nevertheless, this does not mean that the they do not intend to try. 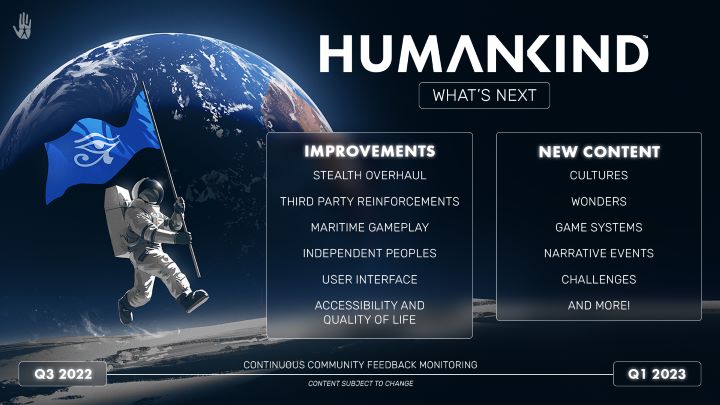 On the occasion of the game's birthday, the team announced further patches and new features. Over time, the game is expected to see changes in the interface, gameplay and to quality of life. The title will also be enriched with new cultures, events and mechanics. We can only wait for more information about them.