As every Monday, the list of Steam's biggest (by revenue) bestsellers of the previous week was released. The sales leader turned out to be Icarus, a network survival game designed by Dean Hall, the creator of DayZ. This success is the more impressive that the game debuted on Steam only on Friday.

The launch, however, can not be considered fully successful. Only 57% of user reviews are positive, which the website categorizes as a mixed reception. Criticism is mainly aimed at poor technical condition and performance. Some people complain even that they can run Cyberpunk 2077 without issues, but not this game. 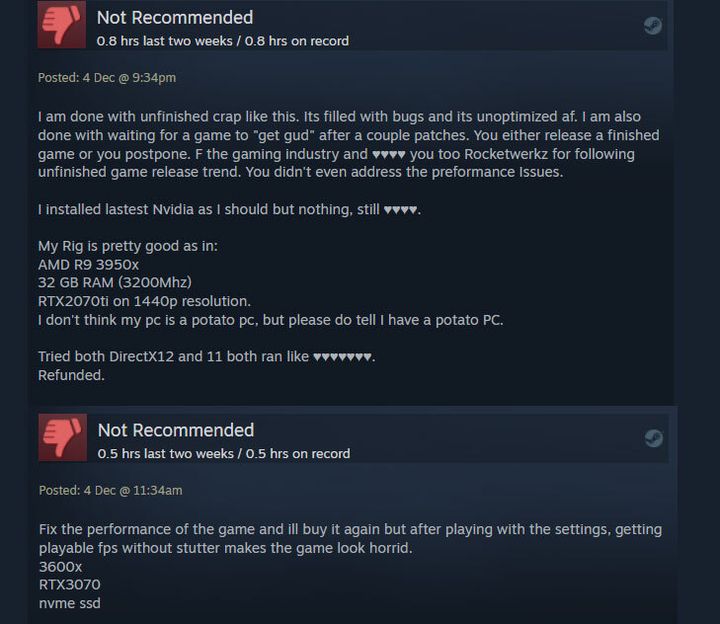 This is not surprising, as the system requirements revealed a few weeks ago are really something to behold. It is recommended to have 32 GB of RAM and an Nvidia GeForce RTX 3060 Ti GPU.

Users complain about performance, but grit their teeth and play. The activity record on the release day was 34 thousand players, on Saturday an increase to 47 thousand was recorded, and yesterday it reached 52 thousand. The number of players is growing, which bodes well for the game's future.

Farming Simulator 22 and Battlefield 2042 continued to sell well last week, while players also enjoyed discounts on Cyberpunk 2077 and Red Dead Redemption 2. In the case of the latter, different editions took two places in the top 10. Destiny 2: The Witch Queen Deluxe Bungie 30th Anniversary Bundle also debuted in the top 10, although the very high price of the bundle probably played a big role here.

Horizon Forbidden West's AI is to Provide a Good Challenge

Need for Speed 2022 May be Modeled on NFS: ProStreet

Halo Community on Reddit Temporarily Shut Down Due to Toxicity

$120 for Ready or Not Alpha Access; Gameplay Footage Available