The Expanse, announced before The Game Awards 2021, is not the only game Telltale is working on. The developers assured that also The Wolf Among Us 2 is still in development. More information about it is to be revealed 'soon'.

Cyberpunk 2077 celebrates its first birthday today. CD Projekt RED thanks the players for their support, the community shares memories, and we take a look back at what the past year has been like.

Straight from The Game Awards 2021 - check out the atmospheric trailer for Dune: Spice Wars. The game will be a combination of 4X strategy and RTS.

The announcement of a new Silent Hill is nowhere to be seen, but director Guillermo del Toro dropped an interesting reference to the series during The Game Awards 2021.

White Orchard From The Witcher Meticulously Recreated in Minecraft

One Minecraft player showed off his impressive project on Reddit. He recreated the White Orchard from The Witcher 3 in Mojang's game. 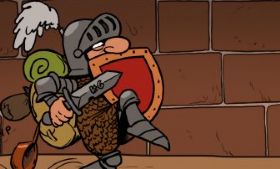 After months of waiting, Lost Ark is finally ready to come to the Western market.

Inflexion Games, a studio founded by BioWare veterans, has announced Nightingale, a steampunk survival game, coming to PC next year.

During The Game Awards 2021 gala, there was an announcement that PUBG: Battlegrounds will switch to F2P model. This will happen on January 12, next year.

Tiny Tina's Wonderlands has received a new trailer during TGA 2021, with the video focusing on the adventure and the antagonist we'll face.

The Texas Chain Saw Massacre is a new horror game from Sumo Nottingham. We have seen its trailer during TGA 2021. The game will be based on the movie of the same name.

In a brand new trailer for Pokemon Legends: Arceus it was revealed that the latest regional form is none other than Hisuian Voltorb.

The Game Awards gala was the venue for the announcement of Star Trek: Resurgence, an adventure game created by former Telltale Games employees.

Persona 4 Arena Ultimax, an enhanced edition of the 2012 fighting game, was announced at TGA 2021. The release date, price and system requirements of the PC version of the game were also revealed.

Embark Studio led by Patrick Söderlund, who used to work for EA and DICE, presented ARC Raiders during The Game Awards 2021. The game will debut on PC, PlayStation 5 and Xbox Series X/S next year.

The latest game from PlatinumGames - Babylon's Fall - will launch in March 2022. Contrary to earlier suggestions, we will have to buy the game at full price.

During TGA 2021, Capcom showed off a trailer of the Sunbreak expansionfor the action RPG Monster Hunter: Rise. Screenshots from the expansion were also released.

During The Game Awards 2021 we received two interesting trailers related to the famous Sonic the Hedgehog. The former offers a look at the second movie, and the latter announces a new game from the series.

Wonder Woman is the New Game From Shadow of Mordor Devs

Monolith Productions is working on a Wonder Woman game. The title will use the Nemesis system from Middle-earth: Shadow of Mordor.

During The Game Awards 2021 a trailer for the third main installment of the Homeworld series was presented. The game is to debut in the fourth quarter of next year.

Dying Light 2 Got an Atmospheric Trailer During The Game Awards

A cinematic trailer for Dying Light 2, one of the most anticipated games of 2022, was shown at The Game Awards.

The first trailer for the Halo TV series was shown during The Game Awards. The TV adaptation of the popular FPS franchise looks impressive.

This year's The Game Awards, apart from a decent number of announcements, also brought awards. The most important one, the title of the game of the year, went to It Takes Two.

An impressive tech demo is now available on current-gen consoles. Additionally, a clip from The Matrix Resurrections was shown at The Game Awards 2021.

One of the games unveiled at The Game Awards 2021 was Suicide Squad: Kill The Justice League from Rocksteady. The new trailer shows members of the Suicide Squad face off against the Flash.

A new trailer from the RPG SteelRising was shown at The Game Awards. Additionally, it was also announced that the title will hit the market next June.

Elden Ring is coming soon. On this occasion, during The Game Awards 2021 another trailer of FromSoftware's game was presented.

During The Games Awards 2021, there was no shortage of new trailers. One of them was a new trailer for the shooter Metal: Hellsinger, in which we'll be exterminating hellspawn in the rhythm of metal music.

A Plague Tale: Requiem on First Gameplay - It's Even Darker

During The Game Awards, the first gameplay from the action-adventure game A Plague Tale: Requiem was shown.

During The Games Awards 2021 gala, we learned what the father of the Silent Hill series, Keichiro Toyamya, is working on. It will be a horror game called SlitterHead. The trailer suggests that the production will be as Japanese as possible.

A PC port of Final Fantasy VII Remake Intergrade was announced at The Game Awards. The title will debut next week on Epic Games Store.

One of the new announcements that appeared at The Games Awards 2021 turned out to be Alan Wake 2. We got the first trailer, but we'll have to wait until next summer for more information.

Check out the dark trailer for Star Wars Eclipse from Quantic Dream. Fans of the Star Wars prequel trilogy should be delighted.

A gameplay trailer from Hellblade 2: Senua's Saga was shown at The Game Awards.

During the pre-show of The Game Awards, we've seen the announcement of The Expanse from Telltale, a game based on a popular sci-fi show.

The Game Awards gala will take place today, and it's expected to be full of various surprises. We'll be able to watch it in several places, including YouTube and Twitch.