Aspyr Media has not yet resolved the issue below, but has shared with players a way to temporarily work around it. All you need to do is bypass the problematic sequence using cheats.

You need to press the left knob three times, which will open the cheat menu. At this point, select the "warp" option. The developers recommend that you first teleport to a random location when the team selection screen appears, before the start of the cinematic. Then use the "warp" code once again and move to the location marked OND504.

This way you will skip the problematic stage. However, you must remember not to enter the shopping district, as this will trigger an error.

This is, of course, only a temporary workaround. The developers have announced that a comprehensive solution will appear in the game in the next update.

On June 8, Star Wars: Knights of the Old Republic II - The Sith Lords debuted on Nintendo Switch. The premiere was a big event.

We're talking not only about the debut of a well-known classic on a new platform, but also about the release of a version that will be enriched with previously cut content.

Unfortunately, it turns out that the game has some problems. Namely, it contains a bug that makes it impossible to complete the game.

First impressions of the players on the new port of KOTOR 2 were really positive. Most fans appreciated the quality and the fact that they can once again experience the great adventure from years ago on Switch.

Unfortunately, at some point the players have collided with a wall. It turns out that the title has a bug which makes further gameplay impossible.

The game crashes every time after the movie cut-scene associated with the landing on Onderon plays. Unfortunately, it seems that the bug can not be bypassed in any way. 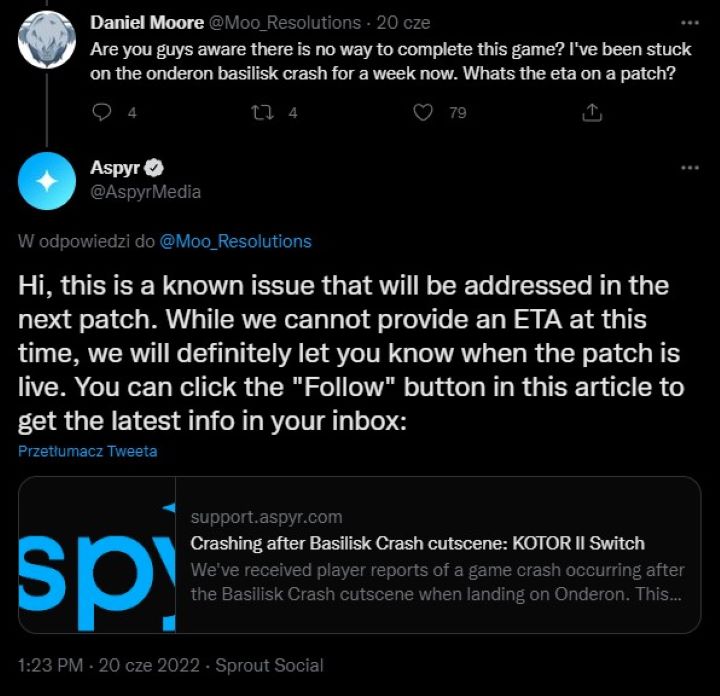 The only consolation can be the fact that developers from Aspyr Media know about the problem. The developers are already working on a solution, but so far they are unable to say when we can expect a fix.

So we must wait patiently and in the meantime avoid Onderon and focus on side missions.