Little Nightmares, a creepy platformer which we wrote about a couple of months ago, has got a release date and a new trailer, which sets an eerie mood for the game. The game is coming out on April 28, 2017. It will be available in both digital and physical version for PC, Xbox One, and PlayStation 4. You can now pre-order Little Nightmares and get bonus content, such as scary in-game masks or the soundtrack. As for the physical version, it will be a limited Collectors Edition (dubbed Six Edition) featuring a figurine of the main hero, exclusive poster, and a couple of other goodies. 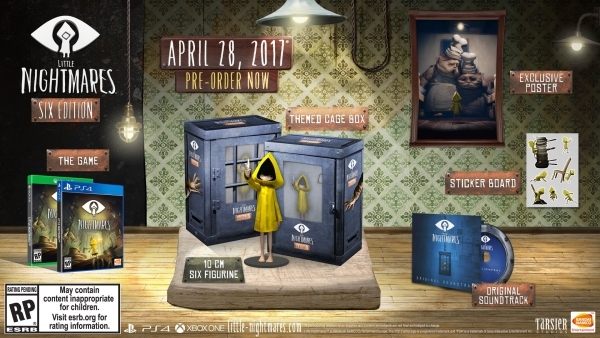 The content of special Six Edition of Little Nightmares.

In Little Nightmares players will assume the role of Six, a tiny female character clad in a yellow hooded rain jacket, trapped in an ominous place called The Maw. The protagonist has to escape the attention of The Maws monstrous residents and flee from there. To survive, Six will have to solve environmental puzzles and make some feverish runs from chasing enemies. All this will be visualized in beautiful 3D graphics powered by Unreal Engine 4, which sort of resembles Unravel, but with the mood closer to Limbo and The Binding of Isaac.