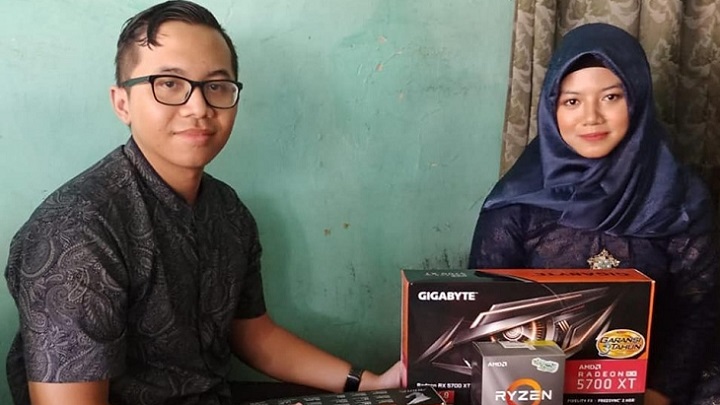 Traditions related to dowries and other financial guarantees persist in various cultures around the globe. This includes Indonesia. Kinda. In contrast to most Western countries, engagement in Indonesia is usually a whole separate ceremony, during which the family of the future husband visits the family of the bride, leading to that one, most important question: "Are you gonna eat that?" (not to mention all the other questions). At that time the young man also gives his chosen one a traditional gift, called seserahan in the Javan language. It is simply supposed to prove that X is not a loser and can afford a gift with an oomph. Not to mention a decent life for his beloved one.

Nowadays, the tradition has been somewhat influenced by the modern times and some couples have already agreed among themselves what would be the best gift. This leads to the formation of a new group of suitors, who simply listen to the needs of their better half. And now, finally, we move on to the main event of the show. 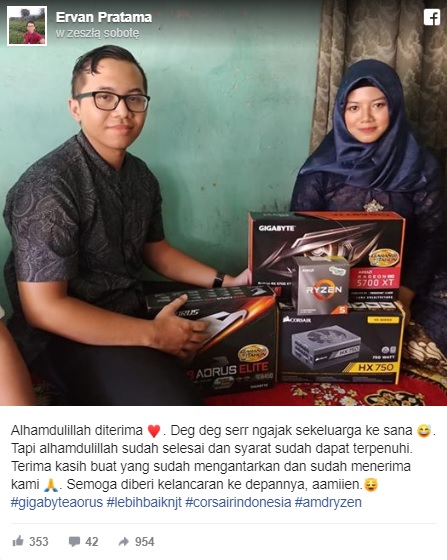 Gentlemen like Ervan Patama are a real treasure to gamer girls. And if you don't even know who he is, you do now - he's a treasure. That's enough. As an engagement gift, he bought his girlfriend, Tiara, components for her gaming PC: Gigabyte Aorus Elite B450M motherboard, AMD Ryzen 5 3600 CPU, Gigabyte AMD Radeon RX 5700 XT VGA graphics card and Corsair HX750 power supply. I'm not shitting you. I couldn't even if I tried. The whole thing cost him ten million Indonesian rupees or 702 dollars. And before you think "what kind of lame-ass parts are those, I bought myself better in March", remember that, first of all, in Indonesia the earnings are lower than wherever a big portion of you is living, secondly, even there you would find few guys willing to spend the equivalent of three month's worth of salary on a ring for their beloved, and thirdly - it's the thought that counts!

Patama assured us that the hardware was the wish of his future wife, but also his own, because they are both fans of Battlefield 1 and other FPS, and thanks to the gift they will be able to play together.

Whenever she is tired after work, she can relax at home playing games with me or watching movies. I don't care what people will say. My only goal is to make her happy.

This guy's pure gold. Pure gold I tell you!

Judging from photo and the quote, we can safely conclude that Tiara's answer was "No, I'm full, you can have it," (also, "Yes"). We wish the future young couple happiness on the new journey of life and many sleepless nights. In Battlefield, of course.