More than a year after release New World saw major changes in the form of the so-called Fresh Start Worlds. The result is crowds of eager players trying to enter the new servers and queues of up to several thousand users (via Reddit).

New World at the top again

Such great interest has enabled New World to surpass the barrier of 100,000 concurrent. The last time such figure was recorded was in early January, so the developers have reasons to be pleased. Thanks to this, the game was in the top 20 of the most popular titles on Steam (currently in 11th position). 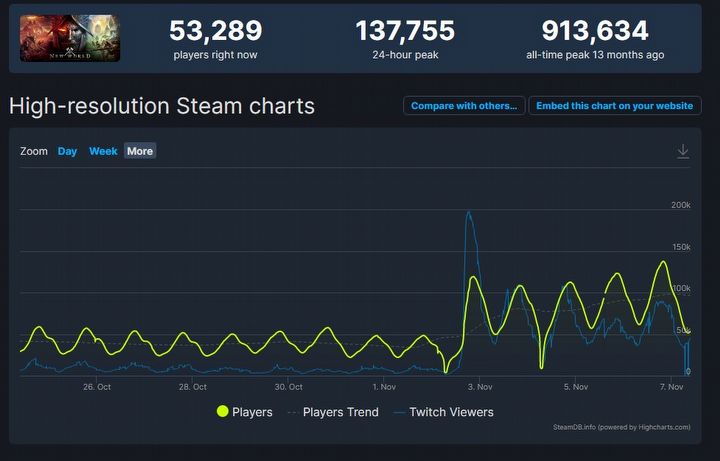 New World is back in favor.Source: Amazon Games.

Since then, interest has not waned at all. Yes, there are times when the number of players drops to about 50 thousand, but until recently, so many people played together at peak times, even in September, when one could already notice the return of players.

It should also be noted that yesterday at one point there were 137,000 simultaneous users in the game. The interest turned out to be so great that Amazon decided to open four additional servers for Europe (eight in total).

A fresh start in New World

It's easy to point out the main reason why players returned to New World after the release of Fresh Start. On social media Internet users are praising the changes related to progressing characters to level 25.

Amazon Games has reworked quests, not only introducing new types of tasks, but also balancing the "quest flow" and improving the narrative layer. Added to this were better rewards, more varied enemies in interesting places, etc.

All this makes the beginning of the adventure with New World a much better experience than a year ago. At least according to many players, including those who began their first adventure with the title.

A year of changes...

At the same time, it is necessary to pay attention to the development of the game over the past year. The devs have introduced a number of changes to the gameplay, such as a group finder for expeditions and a common warehouse for different territories. Mechanics related to loot have also been improved, and July saw the removal of Tuning Orbs, which players had been complaining about practically since the launch.

New content should not be forgotten either. Players returning to New World after a long absence will find more expeditions (including mutated ones), weapons, tasks, enemies, etc. in the game. Also, fans of skirmishes with other players will notice various changes (including new game modes).

...and a tempting discount

Of course, also the promotional price of New World did its part. On Steam the game has been discounted by half. This also applies to the Deluxe edition. The discounted prices are valid until Tuesday.

Nevertheless, this "second debut" was also not without problems. Queues on the servers are proof of the popularity of New World, but long wait has annoyed Internet users. Some stated that Amazon had not learned its lesson from the launch of the game.

Fortunately, currently the situation is not so dire. At the time of publication of this news, getting into even the most besieged server was a matter of a dozen or more minutes at most instead of several hours. There are also times when you can join the fun immediately.

It is also possible to find comments on the web about problems with connecting to servers and character creation, but it seems that most of such glitches have already been partially eliminated by the developers.

Ironically, players are also complaining about... changes related to character progression. This is because Amazon took only the initial stage of gameplay, i.e. levels from 1. to 25 to the workshop. Even earlier Internet users demanded that the developers make similar adjustments up to level 60, the current experience cap.

After the release and checking the changes, some players were not satisfied when, after the refreshed beginning, they had to return to the familiar and - in their opinion - laborious "leveling" in the old way. 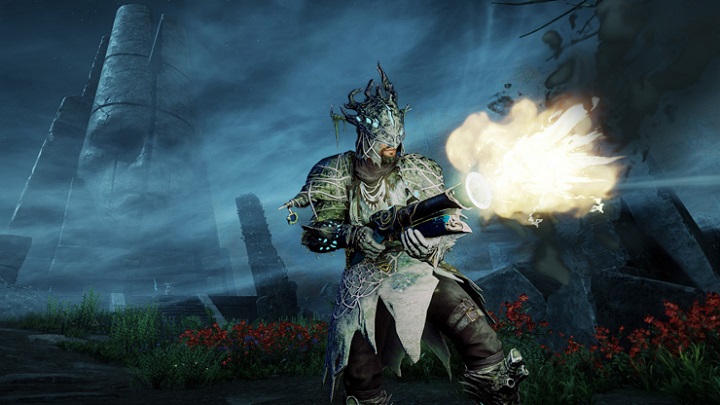 The blunderbuss is one of the novelties added to New World after its release.

However, it should be noted that not everyone sees the need for such changes, especially since some New World players neededs only 18 hours to reach experience level 60. Another thing is that after a year of playing, fans have much more knowledge of the gameplay, which certainly makes power leveling easier. The community has also prepared helpful tools, including a database, a preview of equipment items, etc.

Paradoxically, these complaints can be considered a compliment to the developers. This is because it shows how much players liked the changes. It remains to be hoped that Amazon will also redesign the content for more experienced players.

Techland Talks About Dying Light 2: Bloody Ties and it Talks a Lot

Soulstone Survivors - Characters List; All Classes and How to Unlock

Kingdoms and Castles - How to Get Gold