Skull & Bones is a bit like a ghost ship - a few years ago we saw a gameplay demo, but we had no opportunity to see if the game actually exists. Developer opinions on this title are divided. Some believe that a curse hangs over the project, others simply blame lack of clear decisions about the final shape of the title.

Kotaku interviewed more than two dozen current and former Ubisoft developers (who wish to remain anonymous) and the troubled development process speak volumes about the whole project. Skull & Bones never had clear vision. Managerial bickering took over, and the direction of the work itself was plagued by almost yearly changes and mini-reboots. As of 2013, not even basic questions about the game's key elements had been answered, despite Ubisoft's Paris headquarters pinning high financial hopes on the title.

It's been nearly eight years since work began on Skull & Bones and in that time the game has far exceeded its initial budget. According to Kotaku's anonymous sources, the project cost Ubisoft more than $120 million, and the number is still rising. These were not the only problems related to financial quesions. Developers of the French giant receive bonuses depending on how well their games do. Those involved in the development of large titles such as Assasin's Creed are often guaranteed a lavish income. However, Skull & Bones was so deep under that even the employees' paychecks were in jeopardy. 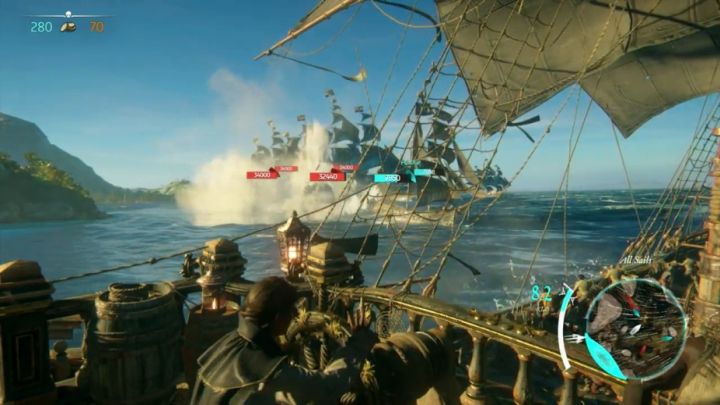 Fragment of gameplay presented at E3 in 2017.

However, it seems that despite years of setbacks, there is finally a light at the end of the tunnel. Kotaku has directed a whole list of questions towards the developers regarding their longstanding venture, and Ubisoft has confirmed that Skull & Bones is in alpha stage:

"The Skull & Bones team are proud of the work theyve accomplished on the project since their last update with production just passing Alpha, and are excited to share more details when the time is right. That being said, any unfounded speculation about the game or decisions being made only works to demoralize the team who are working very hard to develop an ambitious new franchise that lives up to the expectations of our players. Over the past year, weve made significant changes to our policies and processes to create a safe and more inclusive workplace and empower our teams to create games that reflect the diversity of the world we live in."

The position of the French giant differs slightly from the opinions shared by people associated with the title for many years. Some of them outright say that the game has little chance of success and is just a dead weight for Ubisoft:

A lot of stuff still doesnt make sense. Just polishing it at this point would be a waste of time.

An interesting aspect of all the fuss is the alleged toxicity of managers, pay discrimination and office politics that hindered work - ultimately discouraging many people. Kotaku's anonymous sources report that Ubisoft Singapore executives surrounded themselves with docile "noders" while failing to listen to suggestions and feedback from the rest of the workforce. Some of these problems surfaced last year, when Ubisoft executives were accused of abusing their power and even harassing women.

The toxic culture permeating the Singapore studio is in no small part responsible for most of the production issuesreboots, rebrands and re-rebootsthat have plagued Skull & Bones for a decade.

The turbulent history of Skull & Bones

The history of the project is long and turbulent. Work on the title began in 2013 - initially it was a multiplayer expansion for Assassin's Creed IV: Black Flag, which was to be released after the game. In the meantime, the project took on a life of its own and evolved into a full-fledged MMO-style spin-off under a working title Black Flag Infinite and then into a completely separate game called Skull & Bones.

Nobody knew what the fuck they were doing, said one of the former developers in an interview with Kotaku.

The idea behind the venture seemed simple and good at first. In the past Ubisoft Singapore was responsible for developing the seafaring technology for Assassin's Creed IV: Black Flag - implementing the waves and "creating the ocean from scratch," as Ubisoft Singapore's Paul Fu put it. Then, the Singaporeans got a lot of practice creating Ghost Recon Phantoms. Black Flag Infinite was intended to combine those experiences and become a live-service game - but it soon became clear that it wasn't going to be that simple. In the end, Ubisoft decided to start all over again and create a new IP - Skull & Bones - which became known as "Project Liberté".

One of the developers revealed to the editors that the plot of Skull & Bones at one point was set in the Caribbean. Then it was decided to take it to the Indian Ocean. Another version was inspired by Sid Meier's Pirates! and was to be set in a fantasy world called Hyperborea. Yet another variant took the action to Libertalia - a unique cathedral on the water, which was inspired by the mythical pirate colony of the same name. Most of these ideas never made it beyond the planning stages, but consumed an increasing amount of the Singapore team's time. The basic premise seemed to change with the direction of the wind.

Around 2017, the studio tried to quell its ambitions and focus on ship battles. Skull & Bones was reborn once again - this time as a sort of "shooter" modeled after Rainbow Six Siege but with boats in the lead role. This was the version shown at E3 2017, thanks to which the title gained publicity. However, Ubisoft was not ready to abandon the dream of great pirate exploration. It was felt that the project needed a bigger world and story quests beyond the usual PvP battles. So in 2018, the game returned with a new vision and a free roaming PvE (Player versus Environment) mode called "Hunting Grounds". Just like in The Division, players could loot hideouts, fight each other or work together to defeat more powerful AI-controlled enemies.

After another polished demo was unveiled at E3 2018, word of Ubisoft Singapore's initiative went off the radar. It wasn't entirely clear what happened to Skull & Bones. Some believed that despite the impressive announcements, the game did not exist in practice. Others claimed that the version shown at events could function at best as a live-service game in early access and only "mature" over time. Now we know that this version of the game has also been scrapped and in 2019, games like Ark: Survival Evolved have become the new guiding stars for the team at Ubisoft Singapore.

In 2020, there was another change - the title was to appeal fans of the popular Fortnite. The latest version of Skull & Bones will be even different, although it still remains one big unknown. Years passed, and the pirate project continued to struggle for survival, being between a legend and a promise.

The game is still evolving. Everyone knows what an Ubisoft game is supposed to be and the design simply isnt there yet, reported one of the four developers who shared their information with Kotaku.

From the beginning, there were cultural conflicts within the team. Those who came from the Assassin's Creed team were accustomed to top-down decision-making and "hand-crafting" everything down to the smallest detail. However, the team behind Ghost Recon Phantoms had a completely different perspective on these issues. In theory, the two teams' knowledge was supposed to complement each other, but in practice, it just created chaos and misunderstandings. As if that wasn't enough, the Parisian HQ constantly implemented shock treatments in the Singapore studio:

Every time we got feedback from Paris they would just freak out and change everything, and then change the people working on it, and that happened multiple times," one former developer told Kotaku.

Will the game ever emerge on the horizon?

Skull & Bones was initially scheduled to hit the store shelves in late 2018. Then the debut was planned for 2019. Later, there was talk of the second half of 2020 and a period before March 2022. According to recent reports, the title is expected to debut in fiscal year 2023, which is between April 2022 and March 2023. That's four major delays in three years - a rare thing even in an industry that has seen more than one postponed release (and many canceled projects). Ubisoft, however, doesn't seem to be losing its optimism - or at least it wants to appear that way.

"The production by Ubisoft Singapore has been going great over the past 12 months and the results are very promising," Ubisoft CFO Frederick Duguet said back in May.

It's likely that Electronic Arts or Take-Two would've thrown the whole thing in the bin a long time ago due to mounting costs. So why hasn't Ubisoft given up yet? According to three of Kotaku's sources, the French game developer and publisher has signed an agreement with the Singaporean government - in addition to hiring a specific number of people, the Singaporean studio must also release a new IP. Perhaps this commitment is behind the stubbornness of the French.

Ubisoft isn't renowned for keeping to schedules, but in this case we can have reasonable doubts about the game's release. A glimmer of hope, however, is that the project has been pushed to alpha, indicating that they've finally decided to follow through with some vision. Perhaps Skull & Bones may one day loom on the horizon and possibly even be a great game - but so far it's been a story of sinking huge amounts of money and wasting the efforts of the Singapore team

This Mod Turns Combat in The Witcher 3 Into Pure Carnage

The Ascent Conquers Steam; Tribes of Midgard With Good Launch

Age of Empires 4 on New Trailers; Abbasids and Sea Battles

Rumor: Netflix is Preparing a Adaptation of Dragon Age