Elden Ring has both its charms and its ailments. The notifications displayed in the game definitely fall into the latter category. Fans have taken a ridiculing approach to the issue, recalling occasions when the interface made their gameplay much more difficult.

Are you sure you want to resurrect Torrent? For a health potion? Are you really sure?

Elden Ring players are certainly familiar with this type of notification, which precedes a question that requires an answer. They appear not only when we want to use a key, but also during in combat, when our mount - Torrent is defeated, and to resurrect him we need a potion. 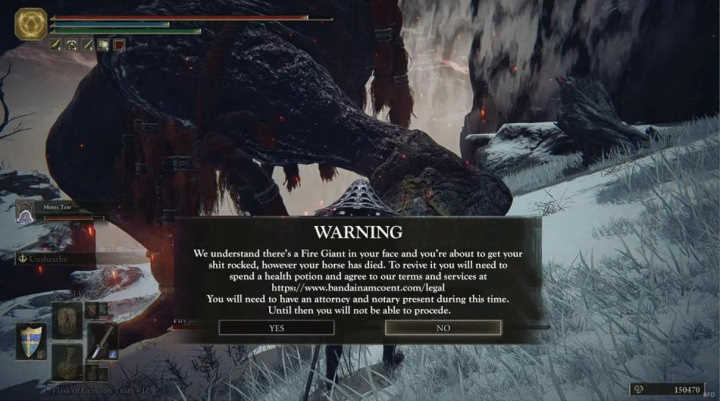 While the notifications themselves were not at fault, having to confirm if we definitely want to resurrect Torrent makes the players laugh.

"*please complete the captcha below to revive your horse*", wrote Iliopsis.

"'please click on each picture of a dog below'," wrote LJKiser.

You can see what the game's blocked UI looks like in the video below.

In addition to having to confirm the resurrection of our mount Elden Ring players have not forgotten the aforementioned notifications regarding the consumption of a stone key. For a short while after using the said item, the player is unable to perform a dodge or attack.

"The amount of times the “stonesword key has been consumed on use” or whatever prompt has fucked me…combat imput should over ride UI pop ups," wrote scullys_alien_baby.

However, that's not all, there was a time when players could block each other's ability to explore or rest in a place of grace by leaving messages. This mistake can be avoided for example by playing offline, but it does not change the fact that it is a gesture that is universally frowned upon.

However, there are also players, who have the impression that the notifications are a kind of jab from Miyazaki. Although a much more likely version is simply a poorly designed interface.

Xbox & Bethesda Showcase Promises to be Something; We've Compiled a List of Games

Classic PS Plus Game Test; Digital Foundry is Not Impressed