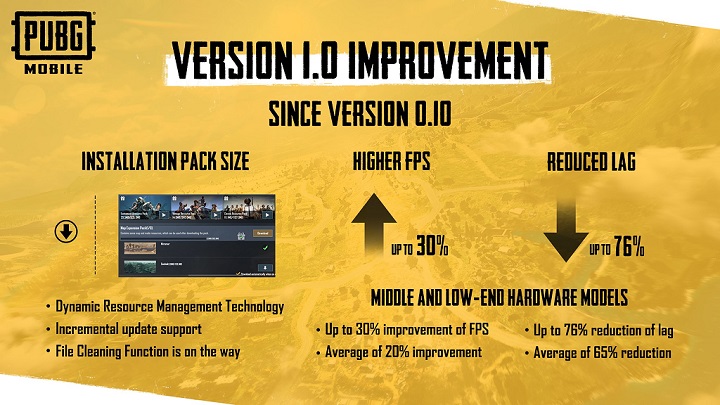 At the time, PUBG was an extremely popular battle royale, one of the pioneers of the genre, so the publisher's decision to port the experience to mobile devices in the form of PUBG Mobile did not surprise anyone. However, it seems that the creators themselves didn't think that the game would become so wildly popular (hundreds of millions of installations, tournaments with a prize pool of $2 million). The title, however, has its drawbacks, among which cheaters and performance issues are leading. The former are being fought by developers on an ongoing basis, and the latter are expected to change with the arrival of the September patch marked 1.0.

As we can read from the graphic above, the most important changes that the update will bring will be:

The update will therefore mainly focus on improving the gameplay quality of players with mid- and low-end devices, which is expected to contribute to the growing popularity of the game in developing countries - such as India, which is the largest market for PUBG.

We already have snowmobiles on sand - time to improve performance?

As far as more detailed data is concerned, we also find out that the character movements, the surroundings, and the shooting effects are to be improved, and the lighting system and textures will go through "complete renovation". The whole game will therefore undergo a major overhaul - both in terms of visual and optimization.

Update to version 1.0 is scheduled to debut on September 8 in App Store and Google Play stores.