Remake of Demon's Souls may not have added the highly-anticipated missing "stone", but that doesn't mean there are no new secrets in the game. In fact, there might be more of them than we thought, because according to a well-known dataminer, there are still undiscovered secrets hidden in the game's files.

Lance McDonald (the guy in question) mentioned today on Twitterthat Bluepoint Games has added four items absent in the 2009 original to the updated Demon's Souls. He didn't reveal anything about them for now, so as not to spoil the surprises for potential explorers. 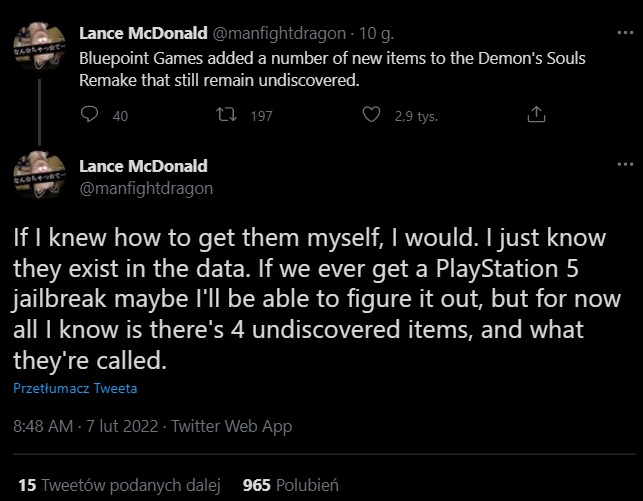 The question arises whether these surprises are actually implemented in the game. After all, it's been a while since the release of refreshed Demon's Souls (over a year to be specific), and we're talking about a remake of a game, examined by the players for several years. So it's easy to conclude that the items found by Lance McDonald are simply content removed by the developers, for example, used during testing.

However, it is still too early for such conclusions. Not one and not two video game secrets were discovered many months, years or even decades after a title's release (sometimes with the help of the developers). Perhaps that will be the case this time as well.

Dark Souls is back on the tables

If you don't like secrets, you might be interested in some details. For example, about the new incarnation of Dark Souls in pen&paper form, which was announced some time ago as the next "souls" project of Steamforged Games, after a board game and a card game.

Today the developers revealed a lot of information about Dark Souls: The Roleplaying Game, ranging from character creation system, through manual cover, to gameplay mechanics. The latter, like in many similar games, will be based on the fifth edition of Dungeons & Dragons - but with some changes. After death, the player characters will be reborn at the bonfire, and in addition to the accumulated souls after death, they may also lose part of themselves.

Obviously, this alludes to one of the central aspects of the series: the loss of humanity after too many deaths, to the point of becoming a mindless Hollow. While this was unlikely to threaten the player in Dark Souls, except through the initiative of fans themselves, who were intrigued by the concept

This is not the only change inspired by FromSoftware's video games. Dark Souls: The Roleplaying Game will receive a completely new magic system, item mechanics (replacing stamina and health), and even "phases" of wounded bosses.

The game will be available for pre-order starting tomorrow, but we still don't know its release date.

Dying Light 2 Will Get Numerous Fixes Later This Week