As a curiosity it is worth mentioning that this is the second time when the publisher officially announces the release date of Outward. First time took place last month by publishing the video below.

Deep Silver announced that Outward, an open world RPG game developed by the independent team of Nine Dots Studio, will be available for sale on 26 March. The production is aimed at personal computers, PlayStation 4 and Xbox One. Video footage presenting the most important elements of the described production is available on the web. Below you will find both the film itself, as well as a short discussion of its most interesting aspects.

At first glance it would seem that an adventure awaits in Outward, in a fantastic world. After all, in the course of the game we will travel through a vast land, carry out various tasks and face various characters (who will not be scaled to our level).

In comparison to other games of this type, the work of the Nine Dots Studio team stands out due to clearly outlined survival elements. The daredevil led by us (by the way, he will not be a chosen one, but only an ordinary mortal inhabiting the world of Aurai) will be able to get ill, hungry or feel thirsty. Besides, it will be necessary to provide him with an adequate amount of sleep, as well as to take care of clothing adequate to the conditions; crossing the desert in full plate armour will not be a particularly good idea, just like a winter camping without a campfire. The magic system, which will be based on rituals, is also interesting. Besides, our decisions will be permanent  the game automatically saves the progress.

It is worth mentioning that in Outward you will be able to play not only on your own, but also with another player, in cooperation on the Internet or on a split screen (also on a PC). 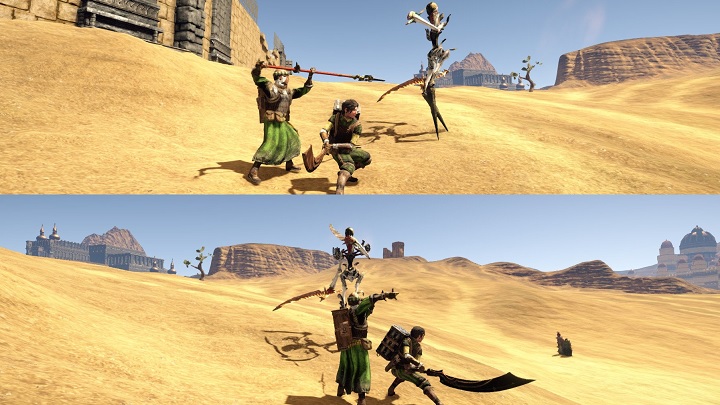 Outward allows you to have fun on a split screen regardless of the platform.

Finally, it is worth mentioning that Outward did not have a particularly easy life. We heard about the game for the first time in 2015, when the creators planned that it will debut about two years later. Meanwhile, the title has failed on Kickstarter, but eventually Deep Silver became interested in it, so that nearly four years later the project will be completed.