Fans of Star Wars and games from Paradox Development Studio - rejoice, because the latest addition to Stellaris, called Federations, released along with a free update will makes you feel like Palpatine.

I am a simple game - I don't like to share the power in strategy games. Alliances, non-aggression pacts, or subjugation - for me these are just temporary conveniences to limit the number of enemies on the map in a given moment. In the end, I'll conquer them all, whether peacefully or or by force That's why I never liked the Federation option in Stellaris. It was a powerful organization, allowing for the assembly of a huge fleet and reducing its cost, but it was at the expense of sovereignty. I had to make concessions with its other members, and that was not in my nature as a rule... gamer. The latest DLC changed that.

Stellaris: Federations focuses, as the name suggests, on developing and adding depth to the options for creation and membership in a federation. Now, within such an organisation, member states can vote on a number of rights and recommendations, and ultimately a Senate can be created to watch over everything. Members of the Senate change periodically, a mandate is not fixed, but it can be done so. If you have the power (economic, technological and military) and many debtors among other rulers - nobody would dare to stand in your way. But this is only the beginning.

Securing a permanent place in the Senate is a success, but not a complete one. Then you have to get rid of the others - there is no point in sharing power. This can also be done with resolutions - using your influence. It's not a simple thing, but Reddit user Skyelarkey and a few others have succeeded. In the end, we become the only member of the Senate, and in practice the Emperor, just like Palpatine. 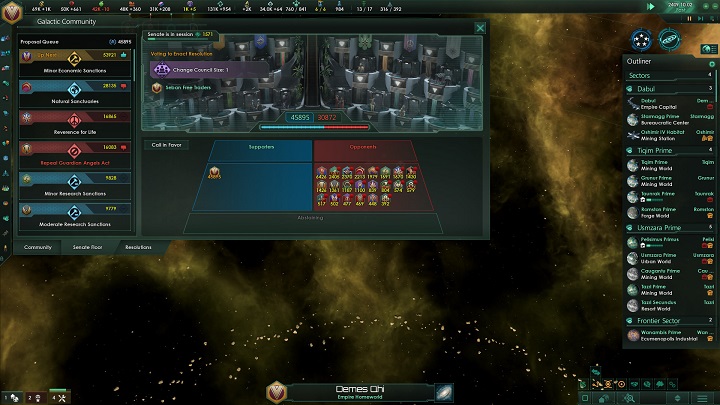 Convincing the rest that we should become the Emperor is not easy - but it is possible. Source: Paradox Development Studio

The whole situation is even more spicy given the fact that Stellaris gives us the opportunity to create our own Empire - from choosing the race and name of the nation, through doctrine, to the name of the beloved ruler. There's quite a lot of space here for a creative player. I'll add that we can play a civilization with psionic powers (depending on how you look at it, it works similar to the Force - amiright?).

Along with the paid expansion, the game also received a free update called Verne, which introduces many changes to the functioning of federations, which, by the way, was noticed by some reviewers on Steam. User ^4PiP in his negative opinion says:

"The "Galactic Community" is part of the free patch (2.6), you do not need this DLC. With this DLC, you are paying $19.99 for a handful of Origins and the Mega Shipyard and the Juggernaut."

If the vision of becoming Emperor has encouraged you, even if you only have a basic version of Stellaris, which lies forgotten on the shelf (real or virtual) - then maybe it's still worth getting back in the game.